Trending Now
You are at:Home»Learn & Live the Faith»Evangelization»The Gift of the Atheists
By Genevieve Kineke on December 8, 2014 Evangelization, Featured, On Media 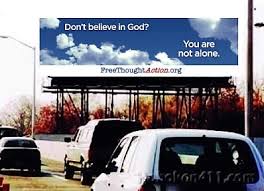 I remember the deep frustration at one point years ago when a surly teen, despite having been conceived with joy and raised with devoted love—decided he wouldn’t accompany us to Sunday Mass. Confronted with his obstinacy, my larger disquiet was how his behavior would affect the younger children. While wringing my hands, I confided my concern to an older, wiser friend, who responded quite calmly, “Explain to the younger ones that their sibling is questioning his faith, and tell them to pray.” How very simple.

That exchange came to mind as I discovered all around me this year the atheists’ aggressive media campaign to ignore Christmas—or rather, to celebrate the “holidays” without God. Here in Rhode Island, the message is simply: “You’re not alone,” encouraging atheists who may feel isolated to be more bold in denying the existence of God. In Memphis, Tennessee, the campaign is more antagonistic. Using the device of a child’s letter, it shouts, “Dear Santa: All I want for Christmas is to skip church! I’m too old for fairy tales.”

While the standard Christian response may be one of horror and dismay—especially since the billboards are placed near residential areas in what the country considers the Bible Belt—I think that they provide a tremendous opportunity. The atheists note that “the location is designed to start a conversation.” And so it is.

It’s the perfect conversation to have with everyone in the family—especially in the families where church attendance may be rote and more based on family tradition or convention. What do we believe? What evidence do we find incontrovertible? Why do we go to Mass week after week? How do we know that what the Church teaches is true? Where does reliable authority lie?

This is indeed a conversation starter, allowing us to share stories of our own obstinacy, stories of conversion, and stories of gratitude. We can tell of prayers answered—in remarkable, unexpected ways, of suffering and consolation, of conundrums that will have to be answered in the next life. Here we have an opportunity to look deeply, privately into our own souls to consider where the doubts hide, where the lifelines are stored, and what God has done for us over the years.

Is it possible that we have used Christianity as a means to an end, hollowing out the marvel of the Incarnation and using the construct as a way of ordering society and establishing good habits in its members? Have we ourselves gone with the crowd—a crowd that happens to attend weekly Mass in a mindless way? Have we prided ourselves on our good works, and considered our parish lucky to have us—hard-working pious souls that we are? These are some of the fundamental questions that need to be addressed if we are to respond squarely to the charge that God-made-man is a fairy tale. It is entirely possible that even believing Christians can misunderstand their primary call to worship the One who gives us dignity and the grace to act well.

Fairy tales, for all the condescension here, are quite consistent in the marvels they offer to the listener. The heroic deeds they relate elicit heroic responses in those who attend. As a fairy tale, the Christian saga would hold up well, since it presents a story that turns the material universe on its head. The only difference is that this is no fable, but the truth. A God-Man really swept to earth, “behind enemy lines,” as C. S. Lewis phrased it, to save those imprisoned by a deathly force, and subsequently cuts the bonds of each soul who turns to him. This is too much, notes Christian existentialist Soren Kierkegaard: “The natural man’s narrow-mindedness cannot bring itself to accept the extraordinary that God has intended for him.” Do we believe?

Our choice in this season of grace is either to continue in our complacent way, ignoring the billboards and bus advertisements’ invitation to think more deeply about our creed, or to grasp more firmly the very real lifeline that can pull us towards the divine, the one defined by Kierkegaard: “Faith is that the self in being itself and in wanting to be itself is grounded transparently in God.” That’s no fairy tale, but an invitation to be exalted in the truth that saves.