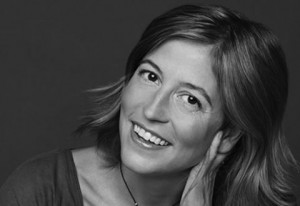 What kind of pioneering contributions? I’ll get to that in a minute. (Amy Richards’ ‘contribution’ particularly deserves comment.) But, first, a bit more about the Girl Scout-sponsored event.

Billed as an opportunity to “celebrate women and girls,” the screening and discussion took place on May 9, 2013 in New York City. The event, co-sponsored by Girls, Inc. of NYC and the public broadcasting station WNET, featured Girl Scouts front and center. From the banner backdrop on stage, sporting the logo of the Girl Scouts of Greater New York, to the moderator’s warm shout outs to the Girl Scouts in the audience, to the college-student panelist who identified herself as a former Girl Scout, the event was all about promoting MAKERS to the Girl Scouts.

In fact, the producer of the documentary explained during the panel discussion that they chose an online platform for MAKERS because “We knew we wanted to reach an audience like Girl Scouts” and girls are online more than anywhere else. Far from being a local event of one council, the MAKERS event garnered support from the Girl Scouts USA. The national group promoted the New York event on Twitter, inviting young Girl Scouts to “join” the live event or to watch it online later. And the MAKERS Facebook page included a photo after the event of the grinning producer surrounded by a group of Girl Scouts.

While it profiles the occasional businesswoman, politician, or athlete, the documentary shown at the screening is chock-full of interviews promoting abortion, lesbian rights, and sexual freedom. Not exactly wholesome content for Girl Scouts. (The MAKERS trailer shown on PBS even includes a woman laughing about faking orgasms.) The documentary ends by proclaiming the women’s movement an ‘unfinished’ revolution which must be spread worldwide.

The panel discussion, which repeatedly invoked Gloria Steinem as the feminist icon, clearly aimed to rehabilitate feminism for younger women, such as the Girl Scouts in attendance. Perhaps the organizers hoped to ignite the unfinished revolution. Marlo Thomas framed the past as a time when, “Women were not allowed to do anything,” and took a direct swipe at Phyllis Schlafly’s pro-marriage work. Declaring that, as a feminist, she herself loved men, Thomas said she just “didn’t want to be married” because “I can’t mate in captivity.” Richards, the co-founder of the pro-abortion Third Wave Foundation, an advisor to Planned Parenthood NYC, and a member of the MAKERS Board of Advisors, described how feminism freed women from the “script” of what it means to “be a good woman.” And the former Girl Scout on the panel encouraged girls to see feminism as about “choice,” and being “entitled” to do what they want.

The Girl Scouts USA website links to and promotes the “MAKERS” video series, praising it for telling “the remarkable story of the most sweeping social revolution in American history” —feminism. The Girl Scouts USA continue to highlight—through its blog, Twitter and Facebook—CEO Anna Maria Chavez’s participation in the documentary, describing her as being in “great company with other esteemed women who are being profiled (Oprah, Condoleezza Rice, and Gloria Steinem, just to name a few).”

So why is the Girl Scouts’ promotion of a feminist documentary such a big deal?

Because the MAKERS narrative is so unabashedly pro-abortion that it strips away all pretense that the Girl Scouts USA is ‘neutral’ on the issue of abortion.

Let’s go back to the MAKERS series itself.

Although the series claims to feature a panorama of women, it reads like a who’s who of abortion activists. The overall narrative weaves the fight for ‘reproductive rights’ seamlessly into the fabric of American feminism, telling the story through the eyes of selected activists.

The “Groundbreakers” of American feminism, for example, include women like Sarah Weddington, the attorney who argued, and won, Roe v. Wade, the landmark case legalizing abortion. Weddington’s video segment describes the fight for legal abortion as “one of the most important and crucial issues in American life.” (The few pro-life women included in the series, such as Phyllis Schlafly and Carolyn Graglia, are cast as women who “opposed” change for all women.)

But one “Groundbreaker” stands out among the rest as emblematic of the “visionary role models” now embraced by the Girl Scouts: Amy Richards.

Amy Richards was introduced to the Girl Scouts at the panel discussion as a feminist activist and co-founder of the Third Wave Foundation. (The Third Wave Foundation champions abortion, LGBT activism, and until 2011, maintained an “Emergency Abortion Fund” which gave women “grants” to fund their abortions.)  But Richards is a MAKERS Groundbreaker not only for her activism but also for her “brave” decision to pursue selective reduction.

It’s chilling to listen to Richards, in her MAKERS video segment, describe how her “first thought” on learning she was pregnant with triplets was, “Is there any way to get rid of one of them?”

Keep in mind that any Girl Scouts who attended or watched the MAKERS panel discussion—in which Richards did not mention abortion—and who seek out Richards’ MAKERS videos will hear this ‘role model’ describe why it was so important for her to “get rid of” two of her three babies, aborting them in a process called selective reduction.  They will hear her defend that decision, saying, “At the end of the day…what matters is that I was in control of my decision.” And they will hear Richards’ unapologetic moral ‘justification’ for her abortion. “The point for me is that we’re never going to know what’s right for the other people but we should know what’s right for us.”