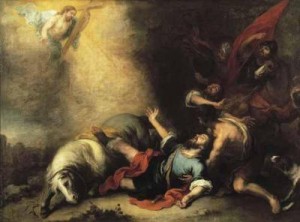 THE FACT IS …
After college I landed a job as a reporter.  “Meatball journalism”—four or five stories daily—was the quota.  The editor, Joe D., took me under his wing.  He said, “Kid, remember two things about newspapering.  First, we are obliged to report the facts.”
“What’s the second thing, Joe?”
“Never let the facts get in the way of a good story.”
In 2000 I went to graduate school to study the Great American Novel.  My advisor taught that writing was “lying with some elegance, dramatic structure, and poetic insight.”  The line between fact and fiction grows fuzzier daily.  Memoirists use too much poetic license and get slammed on TV.  Blockbusters like The Davinci Code are hailed as fact that tells “the story behind the story.”
“Truth is stranger than fiction, because fiction sticks to possibilities; truth doesn’t.”  Truth then, Mark Twain continued, transcends possibilities.  Only God’s Word provides Truth with a capital “T.”
CLIFF’S NOTES VERSION
The Bible is not one book but a library containing 73 books.  Many literary forms are represented on the shelves: law, history, poetry, prophecy, gospels, and epistles.  There also exist books classified as short novels—Ruth, Tobit, Esther, Judith, 1 and 2 Maccabees, and Acts of the Apostles.  Each story centers on heroes whose lives illustrate how God reveals himself.
A novella is made-up but based in reality, and while it contains facts it exists to depict truths that transcend history.  These stories exist to instruct the faithful in the Lord, encourage them in difficult moments, and to entertain.  First composed in oral tradition, the books contain the stories that Jesus and his family told as they sat by the hearth in Nazareth.  They are no less meaningful today.
READ ALL ABOUT IT
As a library, the Bible surpasses categorization.  Familiarizing ourselves with its contents is important and we must distinguish what we read.  The Second Vatican Council (1962-65) produced many landmark documents, including Dei Verbum, or “The Dogmatic Constitution on Divine Revelation.”
Published in 1965, Dei Verbum affirms that attention must be paid to literary forms in the Bible.  All the stories form one narrative but the tales are told by the Sacred Authors in different ways according to the needs and interests of the audiences for which the writers composed the works.  “Truth is expressed differently in various types of biblical writing.  We must look for the meaning that the sacred writer intended to express through the medium of contemporary literary form” (DV 12).
TURN THE PAGE
That’s the story behind the story.  God, the only exegete, communicates in various ways to help us understand him (see Heb 1:1-2).  EWTN pop theologian Scott Hahn authored a booklet, “A Pocket Guide to the Bible,” in which he writes, “Scripture uses many kinds of literature, and unless we know what we’re reading, we won’t really understand what we’re reading.”
I love it when Dr. Hahn agrees with me.
“Of the making of many books there is no end, and much study wearies the mind” (Eccl 12:2).  Hard doctrine keeps theologians awake at night.  (2 Chronicles 12 can serve as an antidote for insomnia.)  Those without STDs can enjoy the Old Testament novels that are constructed with a beginning, middle, and end, and have identifiable characters.  Compelling plots and vivid settings ensure we keep turning pages.  The facts are there; they just don’t outshine the truth.
BACK TO SCHOOL
Catholics understand that God created the world, without believing that it happened Monday through Saturday.  We know that the Bible transmits God’s Word but doesn’t have to be historically or scientifically precise.
Years ago in Florida I enrolled in a study on Exodus.  An 80-year-old bodybuilder sat up front with his arms folded across his chest very week.
“Any questions?” the facilitator asked.
“Did Moses really part the Red Sea?” the bodybuilder asked.
“No, that was Cecil B. Demille,” the facilitator said.
“I don’t believe a word of it,” the bodybuilder said.  “Archeologists can’t prove anything.  There’s no scientific evidence.”
Everyone in the class turned to look around.  I couldn’t help it; it came out automatically, as I remembered that day in Joe’s office.  “Never let the facts get in the way of a good story.”