Trending Now
You are at:Home»Featured»The Hour of Mercy
By Tara Brelinsky on November 13, 2014 Featured, Live in Christ, Parenting 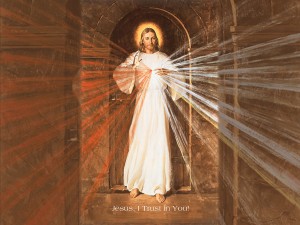 Eight months ago after welcoming my youngest into the wide world, I rediscovered the wee hours of the morning. After my longest gap between newborns (almost five years) in which I’d grown used to sleeping and waking according to my own wants and needs, I had to relearn that sacrificial habit of fumbling in the darkness to meet a nursling’s persistent and repeated demands.

This youngest child, the one of my “old age,” was undeniably the gift of much prayer and petition. His arrival in the early morning hour of mercy seemed significant all along. So, it was no surprise to me that he continued to show preferential treatment for the 3 am feeding.

A few weeks into this revived, infant routine, I was struggling to joyfully offer up my sleep deprived status. But a wise friend turned my trial into blessing when she pointed out that I could utilize the before-the-crack-of-dawn feeding session to pray the Divine Mercy Chaplet.

A light went off in my blackness and I began to relish those moments when my eyes opened to spy 3 on the clock from across the room. Rather than an imposition, my mercy-hour prayers became my mission.

Depending on my perceived state of consciousness (or lack thereof), I began to recite the prayers either focusing on one complete decade or attempting to pray through the whole chaplet before sleep won me back. Seeing as my hands were generally busy lifting, holding and shifting four extra appendages by clock-light, my fingers sufficed in place of beads.

As time went on a new thought made its way to the forefront of my mind; I felt the need to pray in reparation for specific sins or specific groups of people. This idea of focusing my petitions in reparation was particularly uncomfortable at first. For example, I prayed for child abusers even though I find this sin especially reprehensible.

But when I began begging mercy for specific sinners it caused me to see with greater clarity the weight of my own transgressions. While they may not be as grievous as the sin of a murderer, certainly it is not my place to judge myself less culpable or more worthy as Jesus’ mercy is offered to us all like.

Since my only companion in that hour of mercy isn’t able to recite the prayers in unison, I changed the verse from “have mercy on us and on the whole world” to “have mercy on me and on the whole world.” Such a minor change, but it really impacted my perceived level of responsibility. Of course, I am guilty for my part in wounding His Sacred Heart and owning up to that with my words seemed necessary. When my distractions are fewer claiming my sins is a bit more painful, but it also makes the gift of mercy all the sweeter.

Sometimes the news reports can dupe Christians into forming an “us versus them” mindset. The murderers, dictators, abusers, sexual predators, thieves and wanton addicts seem lost in their depravity. They frighten and repulse us. Perhaps, we clamor for the death penalty or we sentence them to hell.

Indeed, hell does exist and some will opt to condemn themselves to it, but this Divine Mercy has the power to transform even the most seemingly lost among us. Resting in that Truth at 3am helped me better understand we are the entire prodigal son.

Jesus died for each one of us and He invites us to call down that merciful blessing on our brothers and our sisters. His mercy is there even for those who may not know Him at that moment, or those who may believe themselves beyond His loving reach.

What an extraordinary task Christ extends to us, to partake in His loving relationship of this fallen people (me included). So, the next time you scan 3 on a clock face consider it an opportunity to join in the petitions for an outpouring of mercy to rain down on you and me and our kinsmen alike.