Trending Now
You are at:Home»Featured»The Human Body and the Death of Normalcy?
By Jennifer Lahl on August 7, 2015 Featured, On TV and Movies, Transhumanism 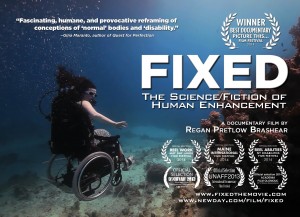 Regan Brashear has done us all a favor by directing and producing the documentary film Fixed: The Science/Fiction of Human Enhancement. Fixed, a New Day Digital film, was released in 2013, and I’m happy to have heard about it and to have been given a chance to watch it.

I confess, on watching the trailer, reading some buzz on the film, and seeing who was interviewed in it, I was skeptical. I assumed before watching the film that it would be an endorsement of the transhumanist movement, which wants freedom to enhance human beings without limits, to reject suffering and disability, and to move the human race beyond “normal” through human enhancements. But I was wrong!

Brashear’s treatment of the subject matter is refreshingly thoughtful as she weaves between everyday people (and children), people with disabilities, experts in the technology development, along with experts in science, ethics, and philosophy.

An early scene in the film opens with journalist John Hockenberry, a paraplegic due to a spinal cord injury he sustained in a car accident at age 19. He asks a group of young children several “who would want” questions: who would want a jet pack so they could fly around? Zachary says he wants “special robot legs.” When asked who would want an extra eye, one little girl raises her hand and says enthusiastically that she wants “three eyes in the back of my head.”

There are plenty of man-on-the-street interviews too, with people wanting chips in their brains, cameras in their eyes, and super memory powers. The list of all we would want is seemingly endless because, as Fixed superbly points out, we are obsessed with certain abilities, we are never content with who and what we are, and our values are misplaced in pursuit of being better than well. As Gregor Wolbring, a biochemist, ability studies scholar, and disabled man who refers to himself as “a variation” reminds us in the film, we will never be content and there will be no end point.

Of course, we do hear from the transhumanist enthusiasts. James Hughes, a self-identified transhumanist, defends the monies spent on human enhancement technologies—look at all the money spent on the super bowl; no one objects to that—saying what he wants are “more abilities.” He claims that in the future “our normal condition today will be considered disabled.”

Hugh Herr, an MIT bionics engineer who, as a mountain climber was stranded in a blizzard that resulted in frostbite requiring double leg amputation, is featured prominently in the film. He wears prostheses he designed called BiOMs, and his own work is focused on the ability to “extend human capability beyond what nature intended.” He states in the film, “I’m for freedom. I’m not for normalcy. I’m actually for the death of normalcy.”

Are these farfetched ideas and technologies that will never come to fruition? Are human enhancements, both physical and cognitive, simply the natural progression of Botox, cosmetic surgery, and our attempts to compensate for the effects of disability? Will baby-boomers demand these enhancements as they age and as their health begins to fail? Will people in the workplace need enhancements simply to remain competitive?

These are the kinds of significant questions raised by this film. These questions need to be answered sooner rather than later as it appears these technologies are rapidly advancing. While many of these technologies offer wonderful benefits for disabled people, these questions are important to consider as they touch on the issue of what it means to be human, and therefore who we value and why (or why not).