Trending Now
You are at:Home»Learn & Live the Faith»Catechesis»The Idols We Forge
By Carolyn Moebest on April 9, 2014 Catechesis, Featured, Live in Christ 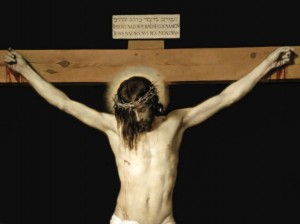 The King in the book of Daniel does not like the true God. Perhaps even before the “Magnificat” was uttered by the Mother of Jesus, the King already knew that the true God would scatter the mighty such as he from his throne.

So the King decides to builds his own God. Standing at 9 feet wide and 90 feet tall of precious metal and stone, this image is meant to send a message.  The King is the only god that matters.

Three holy young men refuse to bow to the pillar, and when they refuse, are ordered into a fiery furnace. In a moment of weakness, even the most devout can choose what is comfortable over what is true, but these men resist.  In response, the king becomes so indignant that he turns to murder by fire.

In the Gospel, there is a strange juxtaposition. The Jews, who scriptures say “believed in Jesus”, become indignant when Jesus corrects them because they are not doing “the works of Abraham.” They are instead relying solely on their “sonship” with Abraham, without any “works”.

Suddenly Jesus exclaims, “You are trying to kill me!” and even though they believe in Jesus as it says at the beginning of verse, they still want to build Jesus into a God like Bel, in the image of what they believed Abraham imparted to them as his “sons”.

Jesus quickly rebukes them.  He tells them that if indeed they were the sons of Abraham, they would do what Abraham did, which was to honor God by their faith in Him and by works.

In modern times man has created ways to make up his own God just like King Nebuchadnezzar did.  We believe in a newer, better God that hardly manifests any of the traits of the Triune God. Just as the Jews who “believed” in Jesus cooked up their own doctrine that made them comfortable, so do all Christians who act as if their behavior is separate from their belief.

It is so easy to fudge our God into a comfortable image of metal and stone who accepts our sinful ways. We say we are still “believing” in Him and are certain that it will not harm anyone or anything. However, we can look at the results of sin in the scriptures, in which innocent children were thrown into a raging fire. In Jesus’ time the sin of the sons of Abraham who said they believed ends up nailing Jesus to the cross.

“Often remember that proverb; The eye is not satisfied with seeing, nor is the ear filled with hearing… Study therefore, to withdraw thy heart from the love of visible things, and to turn thyself to things invisible, for they that follow their sensuality defile their conscience, and lose the grace of God. – Thomas a Kempis Chapter 1 verse 5