Trending Now
You are at:Home»Learn & Live the Faith»Catechesis»The Imitation of Paul, A Saint’s Saint
By Rev. Tucker Cordani on February 10, 2012 Catechesis, Featured, MyChurchParish.com 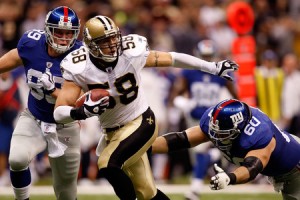 I was born to be a New York Giants fan.  Being a fan is, quite literally, my birthright.  My father is a lifelong fan, and  in 1971, the year I was born, star running back Tucker Frederickson completed his final season with the team.  Spellbound with nostalgia, my father ensured that Frederickson would remain a household name by convincing my mother that they should give his name to me.

Nothing wrong with that.

At Mass that morning, I looked at the assembly and but it seemed more like a pre-Superbowl party than the Eucharistic celebration.  Parishioners arrived bedecked in team regalia.  They weren’t rooting for the Giants.  All week long people had been asking me to pray for the Patriots—I prayed they’d lose.   Would that I could have sported a chasuble with that snooty NY emblem.

Now the game is over.  Naturally, the commercials stole the show and during the half-time performance there was a finger malfunction; there weren’t enough Superbowl rings.  The fervor of fanaticism has faded but its legacy of lunacy—hedonism and idolatry—remains.

It’s time to jump off the bandwagon and to root for the real winning team: the Saints.  And I’m not talking about ones from New Orleans.

The men and women who have helped to found the Church are the heroes to venerate.  We need role models, not interchangeable superstars with salaries—and egos—big enough to fill Gillette Stadium.  Sports dynasties aside, by opening kickoff next season we will receive a new roster and many of th0se we worship now will be ‘immortalized’ in Wikipedia blurbs.

As Catholics we pray with the communion of saints because they serve as models of devotion.  By their lives and their works they have helped build Christendom.

I feel toward the saints I emulate–too numerous to mention–like parents feel about their children: I like different things about each one but I love them equally.  Paul the Apostle has always been a starter, a ‘saint’s saint’ who splits the uprights and leads us to victory by  example.

In the First Letter to the Corinthians (AD 56), Paul encourages disciples at Corinth to practice what he teaches.  “Be imitators of me, was I am of Christ” (11:1).  The imitation of Christ, Paul says, should permeate our lives, guiding us through daily devotion to the position we are called to play on the God-squad.  Whatever you do, Paul says—eating, drinking, working, praying, recreation, suffering for the Gospel—do it all for the glory of the Lord.

Why does Paul tell us to ‘imitate’ him?  Isn’t that egotistical?  It’s like he had won the Superbowl and was enroute to Disney World.  Why follow him?

Because he sets a good example.  Paul saw the Lord, but the Corinthians didn’t–but they saw him and affirmed his apostolate.  We no longer see Paul, but we read his New Testament letters, his “playbook,”  which he wrote by dictation from the Holy Spirit.  He offers himself as an example as Christ offered his life for the Church.

To emulate Christ can seem daunting.  It can be easier to look to others as standards.  Many great saints have shown us the way to a richer spiritual life.  The Imitation of Christ was written in the 15th Century by Thomas à Kempis, a German monk.  Its basic theme is that, since Jesus Christ is true God and true man, by imitating Jesus as man, the disciple becomes more like Jesus who is God.   À Kempis wasn’t a saint but his work is considered a masterpiece of Catholic spirituality and has influenced countless Catholics, including me.  Saint Therese Lisieux, the 19th Century doctor of the Church, centered her spiritual development on Paul’s letters in the Bible and knew à Kempis by heart.

By imitating Paul, who imitated Christ, we become what Christ is, through the example set by Paul and the communion of saints.  We become holy.  “Keep on doing the things that you have learned and received and heard and seen in me.  Then the God of peace will be with you” (Phil 4:9).