Trending Now
You are at:Home»Learn & Live the Faith»Apologetics»The Invention of Judaism
By Gabe Martini on March 15, 2012 Apologetics, Featured, History 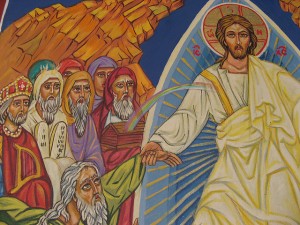 Christ and the Prophets, True Sons of Abraham

It is a common misconception today to associate the religion of Judaism with that of Moses, the prophets and even Jesus – when in reality, Judaism is newer than the Christian Church. This confusion is only compounded due to the existence of the modern state of Israel – a state that has no connection or correlation with the Old Testament scriptures in any real way, shape or fashion (including its people). Indeed, as the apostle Saint Paul intimates, the only real Jews are Christians (e.g. Romans 2:28-29; Galatians 6:10), for the Seed of Abraham is Christ Himself (and all those who are united to Him through Baptism in the Church; cf. Galatians 3).

The development of Judaism occurred as a reaction to “the Way”; that is, to the apostolic Church following the resurrection and ascension of Christ in the middle of the first century AD. The first rumblings of this new religion were heard at the academy of Yavneh (Jamnia) near the end of the first century (~ AD 90). The Romans allowed a Pharisaic sage named Yohanon ben Zakkai to establish this academy as a place of study for the scribes and Pharisees (those who were left after widespread conversions to Christianity and the sack of Jerusalem – and destruction of the second temple – by the Romans in AD 70).

“Representatives from a number of groups seem to have gathered there, and it is likely that a variety of these had their input into the new synthesis which became Rabbinic Judaism. One major contribution seems to have come from the Pharisaic tradition” (Lester L. Grabbe, Introduction to Second Temple Judaism, p. 27).

This new “synthetic” religion was one that incorporated a variety of ideas from the previous incarnations of Judaism, but was not a direct continuation of what had existed before (especially given the lack of a temple). Along with this change came the emphasis on “study” as opposed to worship and praxis (food laws, etc.), something rather unique and unknown in any religious piety of the Judeans before this time. As Grabbe writes, “study as an act of worship became the centre of Judaism after [AD] 70.”

This emphasis on study was likely due to the influence of the scribes (Jesus’ other favorite group of people, next to the Pharisees). As such:

“Rabbinic Judaism is a synthesis of various elements of pre-70 Judaism, but two of the main contributors were the Pharisees and the scribes. However, Rabbinic Judaism was not to be identified with any particular pre-70 group; on the contrary, it was a new creation with its own identity even while borrowing various aspects of the earlier pluralistic Judaism.”

Given that Judaism was a reaction to “the Way” – to the Christian Church as the replacement of faithful, second-temple Judaism – it is fair to draw an analogy to that of the reformers as a reaction to the Roman Catholic Church. The reformers were not “one and the same” with the Latins, but they were no doubt reliant upon what had come before them. Despite this fact, however, what later developed (evolved) over time had little or nothing to do with the medieval Roman Catholic Church when all was said and done.

Similarly, the development of Judaism was ongoing and was not fully realized until the medieval compilation of the Babylonian Talmud. In this, any connection or identification with the faithful men and women of the Old Testament scriptures was completely severed and would never be recovered (and indeed cannot be, without a union with Christ and His Church). “This new form of Judaism did not develop overnight, of course. The activities of Yavneh covered much of the period between 70 and the Bar-Kochba revolt” (p. 28).

In the end, the ideas that developed among this new religious movement were not that of the previously apocalyptic/eschatological second-temple Jews. On the contrary, the chief concern of these “new Jews” seemed to be their preoccupation with the betrayal of God;“the acute loss felt over the temple.” This no doubt explains why later Jews (in the Talmud) would consign prophets such as Jeremiah and Isaiah to the suffering of “hell” because they dared to criticize their Jewish ancestors.

“Woe to you, scribes and Pharisees, hypocrites! You are like hidden graves, and people who walk over them do not even know it”
According to St Luke (11:44, PT).