Trending Now
You are at:Home»Learn & Live the Faith»Catechesis»The Last Days and the Resurrection the Dead, Part III
By Bob Kurland on April 21, 2016 Catechesis, Featured, Science 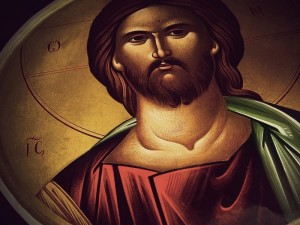 This is the third in a series on unconventional propositions about last days and the resurrection of the dead. The first was on that of the Russian mathematician, Andrej Grib, dealing with quantum logic; the second on that of the American physicist, Frank Tipler, dealing with his physics derived Omega Point; this, the third, on the Omega Point as a goal in evolution, devised by the French Jesuit paleontologist, Teilhard de Chardin.

Teilhard de Chardin’s thesis is one more difficult to summarize and encapsulate in a short article. He has fan clubs pro and con; there have been books and articles (including those by Popes) extolling his work, and those by eminent theologians consigning it to an ash-heap. I will try to summarize the essential points and to point the reader to online sources (for and against) that delve more deeply.

The Thesis of Teilhard de Chardin

Teilhard de Chardin participated in an important discovery in the evolutionary descent of humans, the discovery of Peking Man. His training as a Jesuit and a scientist formed his belief  that both the Catholic faith and science were true and good, and that one need not forsake one to follow the other. As N.M. Wildiers put it,

“In order fully to understand a writer…[we must] form as clear a picture as we can of the problem to which the teaching is presumed to supply a solution… the central problem with which Teilhard was concerned, the problem which is the core of his theological thought,… was without doubt what is now known as secularization.”  N.M. Wildiers, Foreword, Christianity and Evolution

The implication here is that secularization, the loss of religious values, comes about because science is separated from religion. Accordingly, de Chardin’s project was to bring them together again. 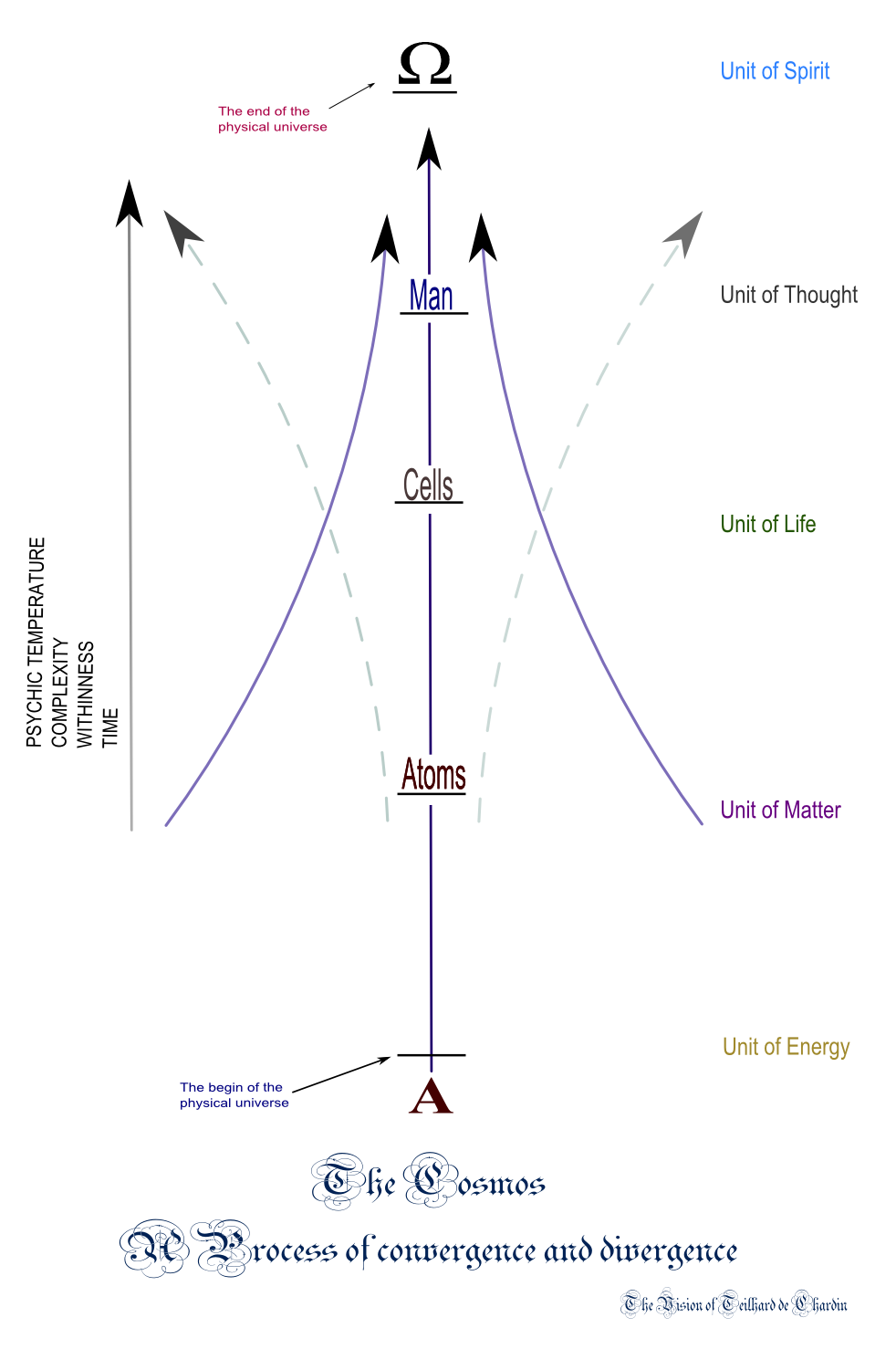 “…creation is not a periodic intrusion of the First Cause: it is an act co-extensive with the whole duration of the universe. God has been creating ever since the beginning of time, and, seen from within, his creation (even his initial creation?) takes the form of a transformation. Participated being is not introduced in batches which are differentiated later…God is continually breathing new being into us.[emphasis in original]“ Teilhard de Chardin, Christianity and Evolution, p. 2

Thus there are stages in this continuous development, in the evolution of the cosmos, as listed in the figure above:  matter–> life–> thought –> spirit, or atoms –> cells –> man –> Omega Point (Christ). At the Omega point all will coalesce and, as near as I understand de Chardin, there will be a super consciousness into which individuals are subsumed.

The Christ of Teilhard’s Omega Point is more than Christ the Word, who as God created all things, and Jesus, the man who suffered and died to save us. He is “Christ-the-Evolver”.

“[He is identified] not with the ordinating principle of the stable Greek kosmos [the Logos], but with the neo-Logos of modern philosophy, the evolutive principle of a universe in movement.” op. cit, p. 181.

Finally, de Chardin would combine the three mysteries of Christology — Creation, Incarnation, Redemption — into a fourth:

“The three mysteries become in reality no more, for the new Christology,…they are aspects of a fourth mystery, which alone…is absolutely justifiable and valid…it is the mystery of the creative union of the world in God or Pleromization.” op.cit., p. 183

In the above I have not commented on de Chardin’s views on resurrection of the dead. Near as I can tell from his works and commentaries on them he supposes that we are immortal (as a soul) and will be subsumed into the Omega Point at the end. This is not the view given in Catholic teaching: both body and soul will be resurrected and we will be resurrected as individuals, not as components of a super-being.

With respect to other parts of de Chardin’s Christology and theology, I can only say it is like the curate’s egg: there are some excellent parts and parts which are BAAD! I’ll leave it to the reader (after he/she goes through the references linked below) to decide which is which.

Early in his career de Chardin ran into problems with Church authorities because of his novel views on evolution and the Dogma of Original Sin. I won’t discuss this matter here (it’s worth at least two posts) but link to the following reference: Evolution and Original Sin: the Problem of Evil (written by Jesuit priests and seminarians).

I’ll list the links below for Teilhard fans and anti-fans: