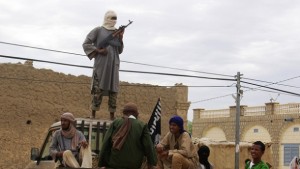 Here it is again. That nasty theory that certain populations (i.e. people of color) need to be culled at any cost, using “drastic” measures, is being touted on the webpages of the respected journal Foreign Policy.

The excuse this time is to reduce terrorists. And the target is people in Mali – the very people who are suffering from terrorists.

“Yet, in the aftermath of the Algerian attacks and the insurgency in Mali, expect to hear an overwhelming silence about the population issue . . .The taboo that continues to surround the issue of population control needs to be cast aside. New, and highly drastic, means of curbing the rate of growth have to be devised and put into practice if this dire threat to regional and international stability is ever to be averted.”

Turns out that Roger Howard is with Population Matters, a notorious population control group. Apparently he hasn’t gotten the memo that population control is not only out of style, its tactics earned it a reputation as evil human rights abuse. Roger’s article validates that reputation.

Among the Commenters that take Mr. Howard to task is:

C’mon. Resource scarcity can certainly exacerbate conflict, and in some instances drive it, but to assert that scarcity is at the root of the current regional conflict is absurd on its face. AQIM isn’t seeking to occupy a vast ungoverned zone so they can get more cattle. And developing nations with burgeoning populations aren’t inherently aggressive and fractious, at least no more so than industrialized nations. The conflict in Mali is simply being used as a pretext for advancing a tired and bankrupt caricature of developing nations. It is disrespectful to the lives being risked and sacrificed in this conflict, and I’m disappointed it made it past editorial review.

A similar theory made one economist rich and famous. Steven Levitt wrote in his best-selling book “Freakonomics” that abortion reduced crime in America by reducing the number of “unwanted” children. He became an instant celebrity – and, as quickly, his theory was debunked.

But that hasn’t deterred Levitt or slain the myth. It’s a useful excuse, just like the myth of overpopulation, providing an illusion of compassion and responsibility to divert from the brutal reality of abortion and population control abuses.

Population Matters tells people to: “Ask your government to press the UN to make access to safe and legal abortion a human right.” And it advocates for homosexuality, apparently because it doesn’t naturally produce children:

We support the right of people to have consensual sex with other adults. Same sex relationships are still a crime in 76 countries. Write to your government to urge that consideration for human rights, including the right to consensual sexual relations, be taken into account in bilateral relations.

Population Matters is seeking accreditation with the UN. Just in time for the global debate on “population dynamics” and a renewed push for abortion and population control. Sign up for C-FAM’s Friday Fax for updates as this unfolds.