Trending Now
You are at:Home»Featured»The Loss of Heaven?
By Mary Pearson on July 30, 2012 Featured, Live in Christ 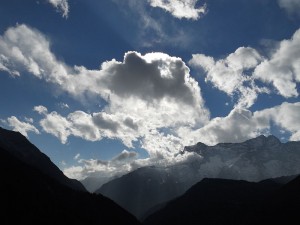 I was in confession a few years ago when the priest, just before the part where you’re supposed to make your Act of Contrition, advised me to recite the version with the above line in it, rather than the one that says, “because of thy just punishments.”  His reasoning was that he felt it would cause me to reflect on why one would dread losing heaven and fear going to hell in the first place.  It’s one of those things that just stuck with me, and to this day— thanks to that priest—I find myself really concentrating on those words whenever I am in the confessional.

I tell you this because it hovers around something I have wanted to write a post about for a while, only I’ve been telling myself I wasn’t ready to write it yet.  So with the disclaimer that I’m nowhere close to being holy enough to write this post as of yet, I’ll press on with this honest and terrifying thought:

Or at least, the ridiculous ideas and images that we concoct for ourselves of what heaven will be like sound incredibly dull.  Even if you could convince yourself that bouncing around on a cloud might be somewhat quaint, who the heck wants to spend ETERNITY flying around with fat babies and playing the harp?  So we’ll feed ourselves vague and somewhat comforting lines to try and convince ourselves that heaven is worth fighting for (or at the very least, that Hell is worth avoiding).  Heaven is really just whatever you want it to be, we’ll say.  Whatever makes you happiest—that’s what your heaven will be.  Chocolate and football and your favorite band on repeat.  Neat.  But not all that satisfying.

I think we know deep down that no earthly good—no matter how good—is going to be enough to bring us eternal happiness.  So really, heaven just isn’t something we think about all that much because we’re frankly not that impressed with any version of it that has been presented to us.

Thankfully, the end goal of the Christian life is not the heaven of the comic strips we grew up reading.  We weren’t created for harps and butterflies.  We were created for communion with the living God.

The real problem: The thought of this is actually more terrifying than an eternity of clouds and rainbows.

“He came to his own home, and his own people received him not.  But to all who received him, who believed in his name, he gave power to become children of God” (John 1:11-12)

To us, the phrase “Children of God” has lost all of its impact.  To us, it just sounds sweet.  Cute, even.  But being God’s children implies that we are…well, I’ll let St. Paul explain it:

“For you did not receive the spirit of slavery to fall back into fear, but you have received the spirit of sonship.  When we cry, ‘Abba! Father!’ it is the Spirit himself bearing witness with our spirit that we are children of God, and if children, then heirs, heirs of God and fellow heirs with Christ, provided we suffer with him in order that we may also be glorified with him” (Romans 8:15-17)

Fellow heirs with Christ.  You know, the Son of God?  The Second Person of the Trinity?  The Messiah?  Our Savior?  Yeah, the goal of our life is to enter into His glory.

I don’t know about you, but I think I belong with the fat babies on the clouds before I am anywhere close to sharing in the glory of Christ.  But this is the call of the Christian life.  This is what it is all leading up to.  Christ wants to give us more than an eternity’s supply of chocolate and ice cream—He wants us to enter into His communion with the Father.

The work of our live is to continually give our lives over to Christ, and to unite ourselves with His suffering on the cross, so that by suffering with him, we may also be glorified with him.

Mary Pearson is the 23-year-old creator of YoungAndCatholic.net, and author of the book Letters From A Young Catholic. She holds a Master’s degree in Biblical Theology from John Paul the Great Catholic University in San Diego, CA. Mary lives in Southern California with her husband, Tyler, and their son, Tyler Jr.