Trending Now
You are at:Home»Featured»The Married Life of St. Gianna, Patron of the World Meeting of Families
By Karee Santos on September 25, 2015 Featured, Marriage, On Books 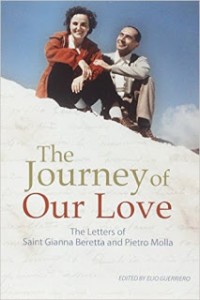 As The World Meeting of Families draws to a close, we can all take a moment to pray to one of the meeting’s patron saints, St. Gianna Molla. (The other patron saint, also dear to my heart, is Pope John Paul II.)

St. Gianna is easier to relate to than many earlier female saints who were virgins, queens, or martyrs. She was a doctor, a working mother, who was married to an engineer. Born in 1922, she experienced many of the amenities of modern life, like telephones, trains, planes and automobiles. Her letters to her husband were gathered and published in a beautiful volume back in 2002. But her letters tell only half the story. After her husband Pietro’s death in 2010, his letters were published alongside hers in a book entitled The Journey of Our Love (Pauline, 2004).

The book offers us an intimate look into the private romantic life of a married saint. Rarely do we come to know another’s marriage well. Behind the smiles are often tears, and behind closed lips are often unshared sorrows. The letters between Gianna and Pietro reveal their life, unfiltered, and it’s an inspiration to behold.

A successful factory manager, ten years older than Gianna, Pietro had the heart of a poet. His letters to his fiancee during the time of their engagement were filled with metaphorical kisses: “a kiss as deep and sweet as the sea” and “another kiss, a long kiss, with a wish for a peaceful night like the night on these quivering waters kissed by the moon.”

Pietro was dedicated to helping Gianna achieve success in her chosen medical profession. He even had the house of his parents remodeled into a clinic for her. For her part, Gianna patiently withstood Pietro’s long hours and frequent business trips, although she was terrified for him whenever he traveled by plane. Sometimes, he took trains to allay her fears, even though the overland trip would last much longer. He couldn’t always avoid planes, however, especially when he visited the United States. So he penned a prayer, which he shared with his wife in one of his letters:

Jesus, who created me and preserve me with graces and blessings without number: you who among the long flights of time and of today, up here in the Heavens, have given me the immense gift of a wife of gold, …

Bless Gianna and our treasures [their children]! Change into grace their anxiety and worry over my long absence and my flights. …

Grant that a serene and luminous atmosphere may always enfold our family, like the atmosphere in the sky through which I am flying and the purity of the clear air I am breathing. …

Keep my family and my dear ones safe, happy, and peaceful in the way of your light, today and always until the day we will fly up, up, always higher, up to you. Amen.

In this prayer, Pietro naturally wove the smallest details of his daily life into a hymn to the divine. Gianna’s sweetness and caring appears consistently in her letters, and Pietro shows himself to be a man worthy of his wife.

St. Gianna is regarded as a pro-life hero, since she died after a difficult pregnancy and childbirth in which she directed the doctors to save her unborn child first and then herself. Not everyone will be faced with such a drastic dilemma. But we can all follow the path of passion and compassion displayed in these beautiful love letters between husband and wife.