Trending Now
You are at:Home»Columnists»The Most Important Person
By Jake Frost on October 11, 2011 Columnists, Featured, Parenting 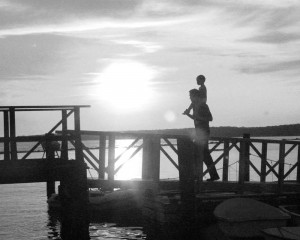 Every child deserves to be the most important person in the world to someone.  The ever pithy Lou Holtz, who said of himself:  “I’m so old I don’t even buy green bananas anymore,” once made an observation to the effect of:  “80% of people don’t care about you one way or the other.  19% of people hope you fail.  The other 1% is your family.”

I think Holtz got the “indifference to hostility” ratio about right.  Most of the world just really doesn’t care what happens to you, and it lets you know it.  I’ve heard opining that parents should make sure their kids know they aren’t the only pebble on the beach.  But spend five minutes on a playground.  Of all the items on a parent’s agenda, that’s one lesson they don’t need to worry about.  The world teaches kids that lesson all on its own, no input required from parents.

I had our kids out at a park last week and our older daughter, Liz, whose a little over two-and-a-half, went to join two other girls making pies in the sandbox.  Liz had a bucket in one hand, a shovel in the other, and a big smile on her face.  She was ready for her favorite park activity:  playground baking.  Her specialty is “seasoning,” which involves the careful shaking of specially selected sand over pies as a last, finishing touch.

One of the two girls looked up, the other just kept mixing sand.

Then she actually got up and gave Liz the Heisman, standing at the edge of the sandbox with her hand extended in a straight arm to ward Liz off and keep her at bay, lest Liz somehow gain access to their sand-pies.

Liz just stood there, watching the two girls, with her bucket and shovel hanging idly at her sides.  No more smile.

“Come one, Honey,” I called to her.  “Why don’t you come here and have a snack with your sister and me.”

Liz came over for what solace pretzel rods and apple juice (along with a hug from Dad) can offer.  She was alright, though.  The chilly breeze blowing from the direction of her potential pre-school playmates didn’t faze her much.  It’s not that unusual on the public park circuit, and, unfortunately, Liz is already used to it.  Even before she’s three years old.

Early and often the world is sending the messages:

Indifference shines through most every encounter our little charges have with the big, wide world.  They don’t need more practice playing second fiddle at home.

What’s needed is for kids to know they really do matter.  Someone cares.  Someone is glad for their company, is interested to hear what’s on their mind, and wants to know how they are.  In fact, there is someone who lights up with joy just to see them, and there is someone in the world who would rather be with them than anything else.

They won’t get that from any institutional childcare, formal educational setting, or other pay-for-care arrangement.  Their only chance for that kind of experience is from their family.

Modern culture isn’t exactly super-inundated with an over abundance of love growing-up all around us like the verdant green of a rainforest.  Borrowing from C. S. Lewis, a parent’s task “is not to cut down jungles but to irrigate deserts”, so that even traveling through the arid desolation of current civilization, a child will still have the chance to see what love looks like — and learn to nurture it themselves as they grow.

We do that for our kids in a million ways:  listening, being open to interruptions, reading to them, foregoing nights out to instead spend time with our little ones.  In our family, we make it a point to eat meals sitting down at the table together, with no TV, and beginning with a prayer.  I was having lunch with the girls the other day and Liz was happily chatting away about what we had been doing that day (we seem to re-cap all of our adventures at every meal), when she looked at me and paused amid the description of the great broom she had found on our walk (Liz loves to find “brooms” – fallen tree branches with lots of leaves still attached – and sweep the sidewalk).

It’s hard to enumerate all the little moments and all the different ways that every day brings to show love and respect to our little people.  But they all begin with the desire and commitment to do so.  It reminds me of Jesus’ explanation that all of the law and all of the prophets depend on two great commandments:  love God with all you have and above all other things, and love your neighbor as yourself (Mt 22: 34-40).  If we can keep first things first and stay clear on our principles, we’ll be in a better position to work through the rest of the details.

But then, as Scripture tells us:  “God made mankind straight, but men have had recourse to many calculations” (Ecc 7: 29).

After Jesus explained the two great commandments, Luke tells us that Jesus’ interlocutor “wished to justify himself” so he asked Jesus:  “And who is my neighbor?” (Lk 10, 29).

Jesus answered the attempt to wriggle around the edges of His words with the parable of The Good Samaritan.  A man is robbed and beaten and left for dead on the side of the road.  A priest and a Levite both pass him by, continuing on their own way.  But a traveling Samaritan stops to help.  The Samaritan spends his time and money and attention to care for the injured man (with no thought of recompense ever mentioned).  Then Jesus turns the tables on His finagling inquisitor and asks him:  “Which of these three, in your opinion, was neighbor to the robber’s victim?” (Lk 10, 36).

The man knows the answer:  The Good Samaritan.

Despite the shifting and beguiling forms that man’s calculations can take, truth will out in the crucible of action:  pass by the person in need?  Or stop to help, despite our own plans and desires and preoccupations?

God has given us all different journeys to make in life, and God places different people in our path for us to care for as we make our way.  Starting first, for those of us who are parents, with our children.  Our children need us to be their 1%.  No one else will, so it’s up to us, while there’s still time to buy green bananas!  Besides, sometimes what we take to be detours are the real path, even if we don’t realize it at the time.