St. Margaret Mary’s parents, Claude Alacoque and Philiberte Lamyn, were distinguished less for temporal possessions than for their virtue, which gave them an honorable position. From early childhood Margaret showed intense love for the Blessed Sacrament, and preferred silence and prayer to childish amusements.

The death of her father and the injustice of a relative plunged the family in poverty and humiliation, after which more than ever Margaret found consolation in the Blessed Sacrament, and Christ made her sensible of His presence and protection. He usually appeared to her as the Crucified or the Ecce Homo. This did not surprise her, as she thought others had the same Divine assistance. At the age of 17 she briefly became attached to the world, but after a vision she repented. 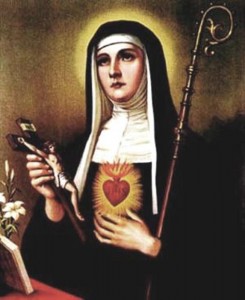 In 1671, she entered the Visitation Convent at Paray, France, where she was subjected to many trials to prove her vocation, and in November, 1672, pronounced her final vows. She had a delicate constitution, but was gifted with intelligence and good judgment. In the cloister she chose for herself what was most repugnant to her nature, making her life one of inconceivable sufferings, which were often relieved or instantly cured by our Lord, Who acted as her Director, appeared to her frequently and conversed with her, confiding to her the mission to establish the devotion to His Sacred Heart. These extraordinary occurrences drew upon her the adverse criticism of the community, who treated her as a visionary, and her superior commanded her to live the common life. But her obedience, her humility, and invariable charity towards those who persecuted her, finally prevailed, and her mission, accomplished in the crucible of suffering, was recognized even by those who had shown her the most bitter opposition.

Her body rests under the altar in the chapel at Paray, France, and many striking favors have been obtained by pilgrims attracted thither from all parts of the world. In 1920 St. Margaret Mary was canonized by Benedict XV.