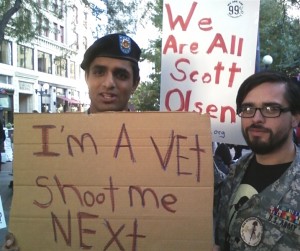 What does Occupy Wall Street want?  Last week GOP Presidential candidate, Herman Cain stated, “nobody knows what their cause is. How are you going to assist them with a cause when you don’t know what the cause is?”

Well, I’m not sure about the representativeness of the signs carried at camp-outs and marches during Occupy Seattle.  And to what extent can placards speak for a movement?  In any case, here is my report on well over 100 signs that I transcribed for the record.  Hopefully the reader will at least get an idea of what is on Occupiers’ minds.

At Occupy Seattle this last weekend, a number of signs reflected indignation and outrage at the violence by police against Occupy Oakland, including serious injuries inflicted on a decorated veteran of the Iraq War, Scott Olson.

A host of snide remarks about OWS suggest that the participants are ignoramuses.  But many of the signs I saw did reflect intellectual qualities – including six with quotes from respectively, Albert Einstein, Kurt Vonnegut, Horace Mann, Johann Wolfgang von Goethe, William Gladstone, and Virginia Wolfe.  An elderly man handed out a statement by Nobel economist, Joseph Stiglitz, including the observation, “You have a right to be indignant.”

Many people are incensed by a Supreme Court ruling in 2010 (Citizens United), to the effect that for political purposes corporations have the same rights as citizens.  This produced quite a number of placards, including these:

I have grouped the remainder of the signs I observed into three categories political, economic and cultural.  Judge for yourself what they say about OWS protestors: