Trending Now
You are at:Home»Learn & Live the Faith»Apologetics»The Persecuted Church
By Genevieve Kineke on January 25, 2012 Apologetics, Featured, Those in Need 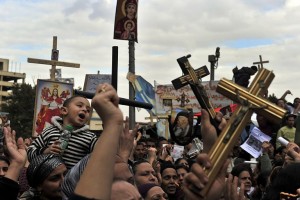 On January 21st, I attended a terrific conference in Framingham, MA concerning “The Persecuted Church.” When I say terrific, I mean the full, riveting, appalling sense of the word. Sponsored by CAMERA, the speakers ranged from young participants of the “Arab Spring” protests to sage professors to political operatives. The event culminated in a keynote address by Dr. Walid Phares (The Coming Revolution: Struggle for Freedom in the Middle East). Each speaker hammered home two distressing points:  first, Christians are routinely harassed, intimidated and slaughtered across the Middle East and deep into the African continent; second, Christians elsewhere are doing very little to help them.

Most riveting were the firsthand accounts of two young women, Juliana Taimoorazy, the Executive Director of the Iraqi Christian Relief Council, and Cynthia Farahat, an Egyptian political activist and writer. They testified to daily harassment and oppression by police and radical Muslims. They spoke bravely about the constant fear and the innumerable political obstacles to living freely in societies predominated by Islam.

One of the most poignant comments was made by Ms. Farahat, who explained that she was forced to live as a fourth-class citizen in Egypt. (Christian women rank behind Muslim males, Muslim females, and Christian males in such objectively stratified cultures. Surely, that reality is a far-cry from the constant grumbling about “patriarchal values in our own society, where females outnumber males in most post-graduate studies.)

As the conference progressed, it became evident that the prevailing narrative in our mainstream press and academia deliberately misrepresents the situation for these people. History textbooks consistently fail to teach children about the scope of the early Church, which spread from Jerusalem across many continents with amazing rapidity. All Christians should know that there were many tribes and nations who embraced the Gospel who have since fallen under the sway of Islam, such as the Egyptians, the Persians, the Arabs, the Assyrians, and the Berbers. Many of these peoples are mentioned in the Acts of the Apostles, and their ranks only grew over the centuries. By the time the Arab Muslim invaders spread through Asia Minor, North Africa, Mesopotamia, and Europe, they were attacking ancient centers of Christianity.

The media builds on academia’s myopia in refusing to explain the nature of the “sectarian strife” currently found in the region. The media narrative typically goes something like this: Islam is native to North Africa, Asia Minor, and the Middle East; Muslims have always and will always control this territory; unnamed minorities are causing unrest and difficulties for an old and venerable civilization.

Only when one looks at the local [often “subversive”]accounts does one discover that Christians are being dispossessed or killed, Islamicists are waging the usual jihad, and those who try to tell the truth are harassed or silenced.  (For a sobering one-month assessment of the details of this “sectarian strife,” mostly ignored by the media, go here.)

Surely, even the previous paragraph would be considered “hate speech” on any college campus and in many media outlets. Even the human rights activists so absorbed in Palestinian minutiae ignore the creeping genocide beyond that one place, and even western feminists curiously delight in the very “multicultural” display that marginalizes women and makes a mockery of their “right to choose.”

The most valuable information presented to those who wonder how to respond to the growing Muslim presence in the west was offered Raymond Ibrahim, who spoke of the constant statistical realities that governed Islamic political behavior over the centuries. Reflecting on the two stages of Muhammed’s life—the Meccan (peaceful) period, when his followers were in the minority and so peaceful; and the Medinan (aggressive) period, when growing numbers allowed them to rule through force—the present situation fits the standard historical model. Currently, radical Muslims are hampered by their faith’s relatively small presence in the west. However, this is quickly changing. Soon, they might transition from the mentality of Mecca to the mentality of Medina.

The question was asked whether the Muslims around us are actually as peaceful in their pursuit of their faith as they say, or whether they are deliberately part of a duplicitous scheme. Mr. Ibrahim answered that the sincerity of individual Muslims does not matter. What matters are the larger designs of the imams, whose task it is to gain converts, spread the umma, and thereby expand the dar al-Islam.

Sadly, in all of these presentations I found two important elements missing which cannot be overlooked.

Firstly, although Christendom spread widely in the earliest centuries, it was highly heterogeneous, often to the point of fracture. The early Christians fought constantly—not only over doctrinal matters, but also over primacy and territory. This reality remains scandalous to this day. (To this end, we have just finished observing the Week of Prayer for Christian Unity, which recognizes as tragic the broken state of the Mystical Body of Christ.)

Secondly, and this point is more egregious, there was no call to prayer. The activists lamented the lack of American support for their protests, which are without a doubt enormously courageous. The scholars called for a better vetting of textbooks and for students to publish papers so that the truth is more widely known. The political advisors stressed the need for stronger agitation in order to make our politicians aware of the real nature of the conflict.

All of these are valuable and practical steps, but they ignore the wider reality that this isn’t merely a matter of “human rights,” but part of the larger Christian narrative: “They will hand you over to persecution, and they will kill you. You will be hated by all nations because of my name” (Matthew 24:9). Prayer is needed now as much as ever, not only because the lack of it reveals how much sloth has prevailed, countering God’s call to hold one another up amidst our sufferings, but also because our antipathy towards their persecution within the Mystical Body belies ignorance about how we will overcome our own inevitable challenges. Indeed, the Jewish leaders of old knew that they should not proceed without prayer, begging Jeremiah:

“Very well!” Jeremiah the prophet answered them: “I will pray to the LORD, your God, as you desire; whatever the LORD answers, I will tell you; I will withhold nothing from you”

God has instituted his Church and will protect it as long as her members remain faithful to her revealed creed. This is an opportunity to stand firmly in the faith, no matter how small the remnant becomes. The beleaguered Christians in the Middle East are right to feel betrayed by occidental brethren, for we are abandoning our obligation to stand with those who are persecuted for the sake of righteousness. Secular academies and governing bodies will be of very little help if we fail to make the case for Christ and His redemption, for that truth alone really sets a person free. This is a call to prayer and action, for upon our prayers and actions depend countless lives and the very strength of the Body of Christ.

Mrs. Kineke offers a Christian response to Islam at her blog Morning Star.