Trending Now
You are at:Home»Featured»The Plight of Priest’s Wives
By Bill Donohue on January 13, 2012 Featured, On Media 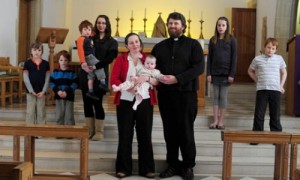 The Vatican recently announced that it is going to facilitate the process of allowing former Episcopal priests and congregations to enter the Roman Catholic Church as intact groups. “What will life be like for the wives of Roman Catholic priests?” asks Sara Ritchey. She is very worried about what will happen to these women, and ends her piece by advising that “it will be prudent for the Vatican to honor the dignity of the wives and children of its freshly ordained married priests.”

If Ritchey has evidence that married wives of Catholic priests have been brutalized, stigmatized or otherwise oppressed, she should play it. That there isn’t any is obvious. Indeed, there were married priests until the twelfth century, and no tales of woe about their wives have ever surfaced. Admittedly, Ritchey found a monk who made caustic comments about a priest’s wife. But he died in 1072. Surely even an assistant professor can do better than this.

In 1982, two years after the Catholic Church said Protestant clergymen who were married could become Catholic priests, the New York Times did a story about one of these priests and his wife. “Mrs. Parker,” the story said, “is a cheerful woman who said members of the women’s guild at Holy Trinity parish here ‘treat me just like anyone else.’” In 1993, there was an article in The Observerabout former Anglican priests who had converted to Catholicism in England, and again no complaints were reported. Indeed, as one wife put it, “If anything, I am more fulfilled now because my husband is so much happier.”

It is obvious that people such as Ritchey are really interested in having women ordained as priests—they oppose celibacy because they think it is an obstacle toward that end. Interestingly, on the opposite side of her op-ed is an editorial criticizing the Supreme Court ruling this week affirming the right of churches to determine its employment strictures. Had the decision gone the other way, lawsuits would have been flying charging the Church with discrimination for not allowing women priests. But the decision was unanimous, effectively closing the door. Looks like Ritchey’s pipe dream hasn’t got a prayer.