Trending Now
You are at:Home»Learn & Live the Faith»Catechesis»The Popularity of Ash Wednesday
By Russell Shaw on February 11, 2013 Catechesis, Columnists, Featured, Live in Christ 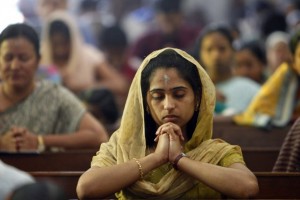 Why is it that Ash Wednesday and Lent remain relatively popular even in highly secularized times like these? It’s a serious question that touches on matters deeper than might at first be supposed.

The popularity I speak of can be seen year after year on Ash Wednesday, when people–some of them perhaps not all that often in church–stream up the aisle to get their ashes. Not a few then return for Mass or Stations of the Cross on weekdays during Lent. How come?

The answer can found in Blessed John Henry Newman’s insistence on the supremacy of the “real” over the “unreal” in religious matters. In one of his early, Oxford sermons, Newman remarks that it’s only insofar as people grasp the meaning of disobedience and their own sinfulness that they also grasp “the blessing of the removal of sin, redemption, pardon, sanctification.” Otherwise, he says, these are “mere words.”

You might say Ash Wednesday and Lent help to make this objective reality subjectively real for us.

That’s not the case with a lot of feasts and festivals that have religious roots but, over time, have been drained of religious meaning. Think of Halloween. How many Americans today link this celebration of ghosts and goblins and Trick-or-Treat with the Christian dogma of the communion of saints? Even Christmas is in danger of suffering this fate–the great feast of the Incarnation all but submerged in commercialization and holiday schlock.

But it’s a different story with Lent. Yes, the Easter bunnies and chicks are out in force, but Ash Wednesday and Lent resist sentimentalization by the greeting card people and commercialization by sellers of consumer goods. After all, it’s hard to find a bright, chirpy greeting or a slogan for hawking merchandise well suited to a season of sorrow for sin. “You’ll look great in ashes”? “Be the first in your neighborhood to do penance”? It doesn’t sound quite right.

But the words spoken at the imposition of ashes do, “Remember that you are dust, and to dust you shall return.” Or the only slightly less apposite, “Repent, and believe in the Gospel.” Stark, uncompromising, admirably real.

In a way, we have here a kind of paraliturgy of prudence. Prudence? Indeed yes. Prudence in the classical sense that you find in an aphorism from the Christian Middle Ages, which the Thomistic philosopher Josef Pieper quotes: “A man is wise when all things taste to him as they really are.”

Prudence is the virtue that confers that highly desirable accuracy of “taste”–realistic perception–in the moral sphere. It’s the virtue by which the truth, the reality, of God and the world become, as Pieper says, “the measure and standard for one’s own desire and action.”

And this or something like it is something whose presence people intuit in Ash Wednesday and Lent and what brings them back year after year so as to “taste”–to experience–life-giving contact with the deep reality of mortality, sin, redemption, and the human condition. Not so coincidentally, such people also are seeking an antidote to the grim escapism of secular America’s entertainment culture and its obsessive fixation on everything and anything except what is real.

“We are all sinners,” people think to themselves as they receive the ashes or make the stations, “we are all going to die.  Help us, Lord, help!” This year, like so many other years before, the season of penance promises to point us in the right direction for obtaining that help. Have a realistic Lent.