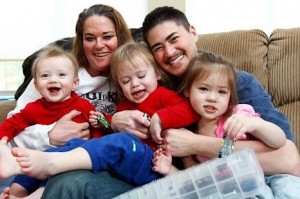 Thomas Beatie with his three children and wife Nancy

God’s rules protect humanity from such the situation of a man who birthed three children, now seeking divorce will soon be a single mother…or is that father? Many are confused because once you mess with Divine order, insanity rules.

From two women, to transgender union, to marriage, to parenthood, and now headed for divorce court, Thomas and Nancy Beatie must convince an Arizona judge that they aren’t in a same sex union.  The court is presented with a quandary because Thomas (formerly Tracy Lagondino) and Nancy Beatie were once two women. The marriage ceremony took place in Hawaii after the transgendered Tracy became Thomas. Then, he became pregnant. Some thought it was a perfect happy ending. But now the couple seeks a divorce, nine years and three children later.

Thomas Beatie became known as “The Pregnant Man,” through extensive media coverage including Larry King, Oprah Winfrey, and as one of Barbara Walters’ “10 Most Fascinating People” in 2008. He also published a book, Labor Of Love: The Story Of One Man’s Extraordinary Pregnancy.

It was in 1997, that Tracy began testosterone treatments. She had a double mastectomy and chest reconstruction surgery in 2002. 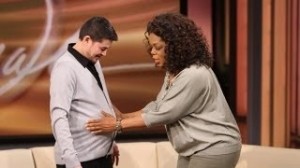 Then, she became he.  Tracy legally changed her name to Thomas and had her Hawaii driver’s license changed to identify herself as a himself.  It was in 2003 that he married his partner Nancy in Honolulu.  Since Nancy was unable to conceive,  Thomas bore the couple’s three children now ages 4, 3 and 2, through sperm donation.  He had kept his female parts intact–the parts he was born with when the doctor announced, “It’s a girl!” And, he did not have a male part (you know which one) constructed, which adds to the confusion as to whether Thomas is really a woman or a man.

It was reported in AZFamily.com that Thomas and Nancy Beatie’s divorce is stalled because Family Court Judge Douglas Gerlach said that he couldn’t find any legal authority defining a man as someone who can give birth.  “Are we dealing with a same-sex marriage?” Gerlach asked.  Arizona bans such marriages and does not recognize those officiated in other states. He said that no Arizona court can declare same-sex unions valid. In addition, courts across the country have declared marriages involving a transgender person invalid.

The case was scheduled for Jan 31 and the judge is expected to rule by early February. Although the couple agrees to a divorce, the judge is considering whether to recognize this as a marriage at all.   Yet, it is not a same sex marriage if Thomas is a man in the eyes of the law, right?

In the AZFamily.com article Nancy and Thomas’s attorney are quoted. “Now we have to prove to the judge that we’re man and woman, married, legally,” said Nancy.

“Thomas wants to be treated as an equal,” said his attorney, David Michael. “He doesn’t want his children to be born out of wedlock or that he wasn’t in a valid different-sex marriage.”  (This is almost funny except for how sad it is.) There is added confusion (if that is even possible) because Thomas kept his female reproductive organs.  Tracy thought she was a man trapped in a woman’s body, but she kept some of her female parts in favor of getting a male part when she became Thomas.  So, the judge wonders if Thomas is really a man because real men not only don’t eat quiche, they don’t have babies. Only women get pregnant. Duh.

But as we all know, the law does not necessarily deal in truth and logic (Roe v. Wade proved that by dismissing the rights of unborn babies).  Possessing childbearing organs makes one a women, but in the eyes of an Arizona judge, will it make Thomas a woman?   For the record, 80 percent percent of female-to-male transsexuals keep their reproductive organs, opting out of hysterectomies. I guess they are somewhat attached to them. 🙂

Nancy stated through her attorney that she wants to be a mother to her children and get on with life without her former partner. ??”I’m just standing up for the truth and what’s right and I’m doing the right thing,” she said.  Again, I’m almost tempted to laugh if not for the urge to cry.  Doing what’s right involves God.

Beatie, who once basked in media attention, is now declining all requests for interviews through his attorney.  No surprise.  They could just split  up and forego legal formalities but the couple wants validation.  Someone should tell them that the court cannot validate desecrating God’s creation. It can only uphold the law or chose to make a mockery of it.

“I believe in one God, the Father Almighty, Creator of Heaven and Earth…”  God did not create this mess.  Man did.  This is a case which reveals how twisted the world becomes when humans goes their own way. Let us pray for God’s mercy on  confused people such as these, especially for the innocent children.