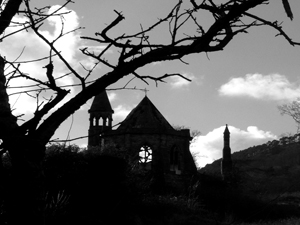 In his engaging new biography, Johnny Appleseed: The Man, the Myth, the American Story, journalist Howard Means scrubs away nearly two centuries of rumor and myth to uncover the truth about 19th-century pioneer nurseryman John Chapman, a national folk hero whom most of us know only from Disney cartoons and children’s books.

Means’ meticulous research reveals Chapman as an ascetic, conservationist and pacifist well-suited to serve as patron saint of today’s faith-based “creation care” movement. It also exposes Chapman as a bona fide religious eccentric. The itinerant preacher traveled alone and barefoot across the frontier proclaiming a peculiar twist on Christianity known as Swedenborgianism, based on the writings of Swedish scientist and self-proclaimed divine visionary Emanuel Swedenborg.

Swedenborgianism never got much traction as American religious movements go. Its founder’s refutation of Christian orthodoxy and claims to have seen heaven and hell down to the last detail — the angels’ celestial homes have “gardens, flowerbeds, and lawns” just like ours, Swedenborg said — proved too dubious to attract a mainstream following. Yet Chapman remained a devoted disciple to the end, inspired by Swedenborg’s writings to live a life as unconventional as the theology he preached.

Chapman was an unusual religious character, to be sure, but as Means notes in his book, unusual religious characters were ubiquitous on the American frontier. Although we tend to view our nation’s early years through the rose-tinted lens of “Little House on the Prairie” reruns, real early American life — and the real religious scene during America’s formative years — was anything but orderly and orthodox. As Means notes, “a whole new horizon of possibilities was forming for religious seekers” during Chapman’s day, including mysticism, pantheism and universalism. Utopian movements flourished. Armageddon seemed just around the corner. Religious groups splintered at alarming rates, and zealous preachers armed with little more than a Bible and a tent jostled each other for the title of leading frontier revivalist.

Means’ description of this wild-and-woolly 19th-century religious scene makes today’s American religious marketplace sound positively tame. And it offers some historical context for the troubling case of Terry Jones, the loose-cannon pastor in Gainesville, Fla., whose Quran-burning stunt recently sparked deadly riots overseas and much hand-wringing stateside about the dangers of religious freedom.

Commenting recently on Jones’ provocations — the pastor’s next plan is to put Mohammed “on trial” and to lead an anti-Islam protest outside America’s largest mosque — Republican Sen. Lindsey Graham of South Carolina said, “Free speech is a great idea, but we’re in a war. During World War II, you had limits on what you could do if it inspired the enemy.”

Actually, our freedoms of speech and religion are more than great ideas. They are bedrock principles upon which this nation was founded, the very principles for which we purportedly are fighting overseas. And they apply in times of war as well as times of peace — the former of which is looking much more like America’s normative condition these days than the latter.

Inflammatory and irresponsible as Jones’ antics are — and embarrassing as they are to mainstream Christians who know that desecrating another religion’s holy book is an exceptionally ineffective means of evangelization, to put it mildly — they fall squarely within the realm of constitutionally protected speech. In America, being an outspoken, offensive religious nut is not illegal — at least, not yet.

Muslims have a right to be angry about Jones’ offensive actions. But no one has the right to murder over such acts. If we affirm that truth in principle, yet call for the muzzling of people such as Jones in practice, we prove that America’s defense of free speech and religious freedom is just a ruse. And we open the door to exactly the sort of religious oppression we condemn in Muslim theocracies, an oppression no less dangerous because it begins with the apparently benign goal of banishing intolerance.

The messy, sometimes ugly reality of religious freedom gave us the incendiary Terry Jones. It also gave us the pacifist Johnny Appleseed, not to mention the heroic Martin Luther King Jr. And it has given millions of Americans, from our nation’s rough-and-rugged frontier days to our own, the liberty to adopt and express religious beliefs that others consider silly, dangerous or downright vile. That’s a freedom not recognized or protected by our enemies. We should not capitulate to them by forfeiting it, even in the hard cases.