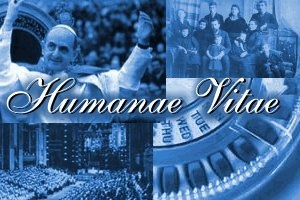 You may be forgiven for not knowing that July 25, was the 44th anniversary of encyclical Humanae Vitae.

Who, after all, is going to remind you? Not the secular media, which scoffs at the idea that men and women can practice self-control in matters of sex. No, they will not breathe a word about Pope Paul VI’s courageous rejection of sterilization and contraception as contravening “God’s loving design” for marriage and the Natural Law.

Nor will the day be feted within the Church. All too many bishops and priests pass over the issue of contraception in embarrassed silence, unwilling or unable to explain to those in the pew why, in the words of one of my former CCD students, “If the Church won’t allow us to get abortions, why won’t it at least allow us to contracept?” (I proceeded to tell her, educating both the other students and a couple of other teachers in the process.)

Yet Pope Paul VI’s beautiful, prophetic, and oh-so-countercultural encyclical leaves no doubt that the Pill and the sexual revolution that it sparked would divide spouses from one another, undermining both the unitive and the procreative functions of marriage.

While Humanae Vitae earned Pope Paul VI the enmity of the world and, sadly, of many Catholics, he also received the approbation of saints. The last letter that Padre Pio ever wrote — shortly before his own death on 23 September 1968 — was to the Pope.

… I know that your heart is suffering much these days … for the lack of obedience of some, even Catholics, to the high teaching that you, assisted by the Holy Spirit and in the name of God, are giving us. I offer you my prayers and daily sufferings as a small but sincere contribution on the part of the least of your sons in order that God may give you comfort with his Grace to follow the straight and painful way in the defense of eternal truth, which never changes with the passing of the years. Also, in the name of my spiritual children and the Prayer Groups, I thank you for your clear and decisive words that you especially pronounced in the last encyclical “Humanae Vitae“; and I reaffirm my faith, my unconditional obedience to your illuminated directions.

May God grant victory to the truth, peace to his Church, tranquility to the world, health and prosperity to your Holiness so that, once these fleeting doubts are dissipated, the Kingdom of God may triumph in all hearts, guided by your apostolic work as Supreme Pastor of all Christianity.

The last letter I received from our Founder, Fr. Paul Marx, OSB, shortly before his death in 2010, also dealt with this great and misunderstood teaching.

On July 25, 1968, Pope Paul VI’s Humanae Vitae re-affirmed the Catholic teaching on life, love and human sexuality. In that document, he listed the consequences of life lived outside Catholic teaching. He predicted that:

1.     Contraception would lead to conjugal infidelity.

2.     Contraceptive practice would lead to a “general lowering of morality.”

3.     Contraception would lead men to cease respecting woman in their totality and would cause them to treat women as “mere instruments of selfish enjoyment” rather than as cherished partners.

In other words, Pope Paul VI predicted that contraception would evolve from “a lifestyle choice” into a weapon of mass destruction. How dreadfully his prophecy has been vindicated by population control and coercive sterilization programs, fertility reduction quotas, and the promotion of abortion literally everywhere in the world.

Contraception’s destruction of the integrity of the marital act—as unitive and procreative—has dire consequences for society and for our souls. Contraception, in other words, is a rejection of God’s view of reality. It is a wedge driven into the most intimate sphere of communion known to man outside of the Holy Sacrament of the Mass. It is a degrading poison that withers life and love both in marriage and in society.

By breaking the natural and divinely ordained connection between sex and procreation, the Pope saw that women and men—but especially men—would focus on the hedonistic possibilities of sex. People would cease seeing sex as something that was intrinsically linked to new life and to the sacrament of marriage.

Does anyone doubt that this is where we find ourselves today?

Sincerely yours in Christ,

I urge you to sign the petition and encourage the bishops to teach Humanae Vitae before another generation of Catholic youth is lost by default.