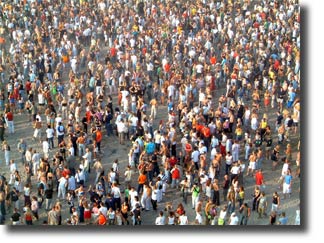 In 1968, Stanford biologist Paul R. Erlich opened his bestselling book, “The Population Bomb,” with this declaration: “The battle to feed all of humanity is over. In the 1970s and 1980s hundreds of millions of people will starve to death in spite of any crash programs embarked upon now. At this late date nothing can be done to prevent a substantial increase in the world death rate….”

Erlich’s doomsday scenarios never came true. Nor did his wish for a strict population control program in the U.S., one enforced “by compulsion if voluntary methods fail.” Today, demographers fret about a catastrophe Erlich never saw coming: a global birth dearth that threatens to transform much of the world into an economically depressed geriatric ward.

But don’t tell that to Simon Ross of Britain’s Optimum Population Trust, a population-control group that recently blasted millionaire celebrities David and Victoria Beckham as “bad role models” for welcoming their fourth child into the world.

“One or two children are fine,” Ross told Britain’s Observer last month, “but three or four are just being selfish.”

Father of four Al Gore apparently agrees — at least, when it comes to other people’s families. In June, he touted “fertility management” as an answer to our global woes and recommended that we ‘stabilize the population” and “empower women” by discouraging baby-making.

Nancy Pelosi, a mother of five, shares Gore’s enthusiasm for limiting the size of other people’s families. In 2009, she defended the inclusion of taxpayer funding for birth control in her party’s proposed $825 billion stimulus package because, she said, “contraception will reduce costs to the states and to the federal government.”

Pelosi’s remarks sparked criticism from many fiscal experts, who noted that a nation’s economic strength depends on maintaining a workforce large and productive enough to pay its bills — including bills for those social welfare programs that Pelosi and her colleagues love to create and expand. If Pelosi gets her wish and America’s birth rate drops precipitously, who will pay the debts that Washington politicians are racking up these days? And who will support tomorrow’s retirees if there are too few young workers to keep Social Security afloat and too few children and grandchildren to provide privately for the nation’s exploding population of elders?

It’s true that global population remains on the rise: We are expected to hit the 7 billion mark later this year and the world’s population will grow by about a third over the next 40 years. But as demographers such as Phillip Longman and Nicholas Eberstadt have noted, that growth will be driven by declines in mortality and an increase in elders, not children. And it will not continue forever. Both Longman and Eberstadt predict that falling birth rates eventually will translate into worldwide population declines — potentially irreversible ones — that Longman says may prove more drastic than the growth rates that so alarmed activists like Erlich in the first place.

The possibility of such demographic decline may sound appealing in theory: Fewer babies mean more wealth for the rest of us, right? Not so fast, says Longman.

“Population growth is a major source of economic growth,” he writes in his 2004 book, “The Empty Cradle.” “More people create more demand for the products capitalists sell, and more supply of the labor capitalists buy. Economists may be able to construct models of how economies could grow amidst a shrinking population, but in the real world it has never happened and businessmen know it.”

Businessmen may know it, but too many politicians and anti-natal activists do not. So they continue to brandish their tattered copies of “The Population Bomb” and harangue parents of large families for contributing to what they consider the ultimate form of environmental pollution: human life.

In their zeal to preserve the planet from the scourge of babies, these activists overlook the fact that humans are problem solvers and producers as well as consumers. They forget that the solution to poverty is not to eradicate poor people, but to use human creativity, innovation and solidarity to create a broader distribution of the Earth’s resources and to reform the corrupt political structures that stop citizens in developing nations from accessing basic necessities.

Although Erlich’s acolytes may be hopelessly locked in the 1960s when it comes to their population views, more demographers and economists are recognizing the truth our ancestors knew well: that children are not burdens but blessings, keys to our future prosperity and guarantors of our social safety net. For a nation on the brink of insolvency, that’s reason enough to congratulate the Beckhams and the millions of parents like them who are making sacrifices today to raise up a new generation that will benefit all of us tomorrow.