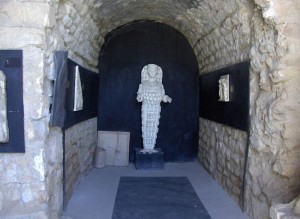 Artemis of Ephesus. 1st century CE Roman copy of the cult statue of the Temple of Ephesus. Statue in the Museum of Efes (Turkey).

The Sacrament of Abortion is the title of a book written by Ginette Paris and published in 1992. In this short book, the author claims that abortion is a sacred act, a sacrifice to Artemis (known to the Romans as Diana).

Artemis is both a protector of wild animals and a hunter who kills them with deadly aim. How can these contradictory roles be found in the same female deity? The view proposed in this book is that a mother properly cares for life only if she possesses full power over life and death. Death is sometimes preferable. The one who can provide death, in order that one may escape an unfriendly life, is really loving the one who is being killed.

Abortion, then, is seen as “an expression of maternal responsibility and not a failure of maternal love” (p.8). “Artemis stands for the refusal to give life if the gift is not pure and untainted….As Artemis might kill a wounded animal rather than allow it to limp along miserably, so a mother wishes to spare the child a painful destiny” (p. 55).

Artemis, of course, is the same goddess whose worshippers felt so threatened by Paul’s proclamation of the Gospel in Ephesus, where a riot nearly broke out and a vast crowd shouted for two hours, “Great is Artemis of the Ephesians!” (Acts 19:34). The worshippers of Artemis today should likewise feel that their beliefs are threatened, because the proclamation of the Gospel of Christ is that He alone has authority over life and death. Neither the mother, nor the father, nor the state, nor the individual herself, can claim absolute dominion over life. “Nobody lives as his own master, and nobody dies as his own master. While we live, we are responsible to the Lord, and when we die, we die as His servants. Both in life and death, we are the Lord’s” (Rom. 14:7-8).

The fact that some defend abortion as a sacred act should alert us to the depth of the spiritual warfare that is going on. Abortion has never been merely or even primarily a political issue. It is a false religion. When pro-life Christians, for example, pray in front of an abortion mill, it is not simply a matter of pro-life people opposing false medicine. It is the true Church in conflict with a false Church. One former clinic security guard, after being converted, admitted why he was angry at pro-life sidewalk counselors: “You were coming to protest in front of our church. That clinic was where we conducted our worship.”