Trending Now
You are at:Home»Learn & Live the Faith»Catechesis»The School of the Gospel is Always in Session
By Rev. Tucker Cordani on December 29, 2013 Catechesis, Columnists, Featured 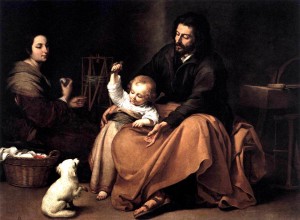 The home of Nazareth is the school where we begin to understand the life of Jesus—the school of the Gospel (CCC No. 533).

My parents married in 1969.  The day before the wedding my father got cold feet.  In the hotel bar he sat drinking beer with the lawyer Tom Wall who counseled my father to make up with his fiancé.  From the phone booth in the lobby—it was very noisy—he called her up.  “I’m coming over and we’re going to work things out,” he said.  “Fine,” my mother replied, “but if you do, you’d better bring a preacher.”

As I often say, “Never let the facts get in the way of a good story.”  Even if it didn’t happen that way it is still a true story, and continues to circulate among our family to this day.  Every family has its own legacy, a shared history that keeps its members rooted in the truth of who and what they are.  The Catechism of the Catholic Church calls this “the School of the Gospel” (No. 533).

The story of the Holy Family and the flight into Egypt has been told for 100 generations.  We don’t know the facts because we weren’t there.  We do know that the journey of Jesus, Mary, and Joseph happened because the Scriptures say that it was true.  The details, however, are left up to our imagination.  We ask ourselves, “How can I make this story my own?  How can I apply its lessons to my very own family, whether I am married with a pack of kids, a member of a so-called ‘non-traditional family,’ or a community of one?”  The story of the Holy Family is our shared history, our story to tell.  Facts are important; but truth is greater than facts.  This isn’t rocket science or brain surgery.  It is the Gospel of the Kingdom of God.

The Holy Family tree can be traced back to Salvation History, long before the birth of Jesus Christ.  God the Father willed that his Son be saved from danger and so through Joseph, the master dreamer, a man of action, Jesus was rescued from the impending peril of Herod.  The Angel of the Lord appeared to Joseph and said: “Rise, take the child and his mother, flee to Egypt, and stay there until I tell you.”  Joseph, the foster father of Jesus, was not disobedient to the heavenly voice but heeded the Lord’s command and the family left Judea for Egypt that night (Mt 2:13-14).  The dream castle he intended to build for Jesus and Mary would have to wait until they returned to Palestine.  Grace intervened.

Their journey to Egypt was no trip to Disney World (“Are we there yet?”) but neither was the Holy Family running away from danger so much as they were hastening to fulfill Jesus’s destiny, to prepare him to become who and what he was—a man like us in all things but sin; the Messiah who proclaimed the gospel of the kingdom of heaven.  In the Father’s plan, Jesus needed to experience the Exodus story before he grew up so that he could identify with the struggles of those whom he was born to save.  In the Book of the Prophet Hosea it is written: “When Israel was a child, I loved him; out of Egypt I called my Son” (Hos 11:1).  The story of the Israelites in bondage in Egypt was one of the most important stories that Mary and Joseph taught Jesus in their one-room schoolhouse of the gospel.  “God sets a father in honor over his children; a mother’s authority he confirms over her sons” (Sir 3:2-3).  The home of the Holy Family in Nazareth is where we begin to understand the life of Jesus … a lesson on family life (CCC No. 533).

Is it not the same today with us?  The stories we share with one another at Mass must be continually taught in our homes, within our families, at our schools, and among nonbelievers.  To fill in the gaps God proves us with his grace.

I was not raised in a churchy family.  To date few relatives have called upon my services, which are offered pro bono.  Waiting tables; driving a truck; saving souls—to them these are a means to an end.  But I do believe that through it all there has been great grace, for what else could have led me to become a priest without my family members goading me into it, or even introducing to me the idea?

There was something in the air that night that my father married my mother.  At the hotel the local Republican Party was holding its caucus.  The place was packed with lawyers, judges, notaries, and justices of the peace.  “Bring a preacher,” my mother said.  My father drove up the hill to my mother’s house with a JP in tow.  There they were married in her living room by the fireplace.  They watched the lunar landing on TV and the following morning they left for their honeymoon—to Woodstock.  In my family that is a true story even if it didn’t happen.

The Russian novelist Leo Tolstoy famously wrote: “All happy families are the same; every unhappy family is unhappy in its own way.”  To that I would say, grace exists in every family.  The color of the wallpaper and the carpeting may be different, but the school of the gospel is always in session.  No student becomes the Master.  We are all lifelong learners.