Trending Now
You are at:Home»Learn & Live the Faith»Catechesis»The Second Greatest Story Ever Told
By Patrice Fagnant-MacArthur on April 8, 2015 Catechesis, Featured, On Books 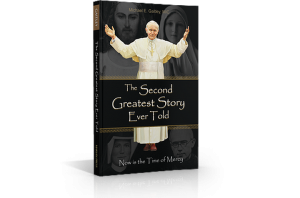 As one might expect, the first greatest story ever told is that of God creating the world and then sending His son to save us from our sins. Throughout human history, God has wanted His people to know Him, to love Him, and to Trust Him, but due to sin, this has not been an easy task. In The Second Greatest Story Ever Told (Marian Press, 2015), which is actually a continuation of the first greatest story, Fr. Michael Gaitley makes a compelling argument that the story of Marian Consecration, Divine Mercy, and the life and mission of St. Pope John Paul II are the second most important example of God at work in our world.

Fr. Gaitley has written a page-turner, connecting St. Margaret Mary, St. Alphonsus, St. Therese, the Marian apparitions at Fatima, St. Faustina, St. Maximilian Kolbe, Polish history, and St. Pope John Paul II is what could be considered a Divine conspiracy. With God there are no coincidences, and through the lens of history we are now able to connect dots that may have previously seemed unrelated. Even those with a working knowledge of the history of the Divine Mercy Devotion and the life of St. John Paul II will find new information in these pages. The threads working through history are truly amazing. In addition, the connection between Marian Consecration and Divine Mercy is explored in a new way, with St. Pope John Paul II held up as the high example of integrating the two in one’s life.

Fr. Gaitley’s purpose in writing The Second Greatest Story Ever Told is not merely to recount history, but rather to encourage readers to become part of this great story. The mission of Divine Mercy did not end with the death of Pope John Paul II a decade ago. Rather, we are all called to take part. Pope Francis has said that “It is up to us, as ministers of the Church, to keep alive this message . . . Now is the time of mercy.” Gaitley offers steps that one can take to be part of this story, including making the Marian Consecration and joining the newly formed Marian Missionaries of Divine Mercy.