Trending Now
You are at:Home»Columnists»The Supreme Court on the Right to Keep and Bear Arms
By E. L. Core on January 19, 2013 Columnists, Featured, Law & Justice, The Social Order 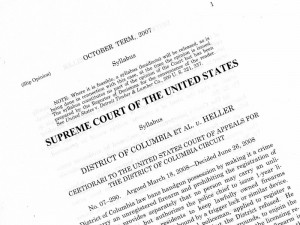 One of two articles for Gun Appreciation Day.

The federal constitution prohibits the federal government from depriving individual citizens of their right to possess and use firearms for lawful purposes, including self-defense. This right is not, however, unlimited: it may be withdrawn, for instance, from felons and the mentally ill, and it may be restricted to firearms commonly in use.

That is a brief summary of the decision by the U.S. Supreme Court, June 26, 2008, in the case known as District of Columbia v. Heller. (An on-line text of the decision is here: Legal Information Institute; a PDF is available here: Supreme Court of the United States.) Extensive quotes from the decision will explicate the court’s reasoning.

The text of the Second Amendment is brief:

A well regulated Militia being necessary to the security of a free State, the right of the people to keep and bear Arms shall not be infringed.

In its decision, the court first addresses whether the right to firearms is predicated on belonging to a militia; it explains that, according to accepted rules of legal interpretation in 18th-century America, the introductory dependent clause does not limit the scope of the succeeding independent clause:

The court quotes an English case decided in 1802, and, in a footnote, a further explanation from a standard text on legal interpretation:

“It is nothing unusual in acts… for the enacting part to go beyond the preamble; the remedy often extends beyond the particular act or mischief which first suggested the necessity of the law.”

The court then takes up the question of whether the right belongs to individuals. It notes that three other instances in the original constitution and Bill of Rights mention “rights” referring to “the people”:

All three of these instances unambiguously refer to individual rights, not “collective” rights, or rights that may be exercised only through participation in some corporate body.

To the argument that the right applies only to muskets and pistols, not to more powerful modern weapons, the court responds as follows:

Some have made the argument, bordering on the frivolous, that only those arms in existence in the 18th century are protected by the Second Amendment. We do not interpret constitutional rights that way. Just as the First Amendment protects modern forms of communications… and the Fourth Amendment applies to modern forms of search… the Second Amendment extends, prima facie, to all instruments that constitute bearable arms, even those that were not in existence at the time of the founding.

Positing that the amendment guarantees “the individual right to possess and carry weapons in case of confrontation”, the court then surveys “the historical background of the Second Amendment. We look to this because it has always been widely understood that the Second Amendment, like the First and Fourth Amendments, codified a pre-existing right.”

By the time of the founding, the right to have arms had become fundamental for English subjects…. Blackstone, whose works, we have said, “constituted the preeminent authority on English law for the founding generation”… cited the arms provision of the [English] Bill of Rights as one of the fundamental rights of Englishmen…. His description of it cannot possibly be thought to tie it to militia or military service. It was, he said, “the natural right of resistance and self-preservation,”… and “the right of having and using arms for self-preservation and defence.”

Then, the court notes that our American forbears agreed, in part, because law enforcement officers are not always around when one needs them:

They understood the right to enable individuals to defend themselves. As the most important early American edition of Blackstone’s Commentaries (by the law professor and former Antifederalist St. George Tucker) made clear in the notes to the description of the arms right, Americans understood the “right of self-preservation” as permitting a citizen to “repel force by force” when “the intervention of society in his behalf, may be too late to prevent an injury.”

The individual right to keep and bear arms is not, however, unlimited. The court noted some of the permissible restrictions:

From Blackstone through the 19th-century cases, commentators and courts routinely explained that the right was not a right to keep and carry any weapon whatsoever in any manner whatsoever and for whatever purpose…. Although we do not undertake an exhaustive historical analysis today of the full scope of the Second Amendment, nothing in our opinion should be taken to cast doubt on longstanding prohibitions on the possession of firearms by felons and the mentally ill, or laws forbidding the carrying of firearms in sensitive places such as schools and government buildings, or laws imposing conditions and qualifications on the commercial sale of arms.

Referring to a case decided in 1939, U.S. vs. Miller, the court noted other permissible restrictions:

We also recognize another important limitation on the right to keep and carry arms. Miller said, as we have explained, that the sorts of weapons protected were those “in common use at the time”…. We think that limitation is fairly supported by the historical tradition of prohibiting the carrying of “dangerous and unusual weapons.”

The court also addressed the notion that the Second Amendment ought to be interpreted to balance the beneficial effects of restrictions with the burdens they might place on exercising the right:

The very enumeration of the right takes out of the hands of government — even the Third Branch of Government — the power to decide on a case-by-case basis whether the right is really worth insisting upon. A constitutional guarantee subject to future judges’ assessments of its usefulness is no constitutional guarantee at all. Constitutional rights are enshrined with the scope they were understood to have when the people adopted them, whether or not future legislatures or (yes) even future judges think that scope too broad.

In conclusion, the court also addressed the claim that the Second Amendment has outlived its usefulness:

The enshrinement of constitutional rights necessarily takes certain policy choices off the table. These include the absolute prohibition of handguns held and used for self-defense in the home. Undoubtedly some think that the Second Amendment is outmoded in a society where our standing army is the pride of our Nation, where well-trained police forces provide personal security, and where gun violence is a serious problem. That is perhaps debatable, but what is not debatable is that it is not the role of this Court to pronounce the Second Amendment extinct.

A later case, June 28, 2010, McDonald v. Chicago, ruled that the Second Amendment also prohibits state and local governments from depriving citizens of the right to keep and bear arms. (An on-line text of the decision is here: Legal Information Institute; a PDF is available here: Supreme Court of the United States.)

See also The Catechism on the Right of Self-Defense.