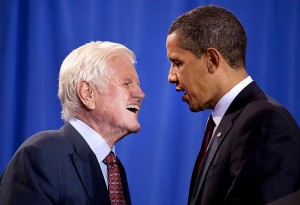 Another round of declassified FBI files on Senator Ted Kennedy has been released (click here and here). Fittingly, in Kennedy’s case, they once again raise all sorts of questions, from the moral to the political to issues of national security.

First, however, allow me to pause with a sympathetic note. Among the documents within Kennedy’s 2,200-page FBI file are materials from the mid-1960s on various lunatics threatening to shoot the young senator. Reading those pages is sad, particularly as they move from not only Ted as a target but also his brother Bobby. And then, it all struck home—like a punch to the gut—when I suddenly happened upon a June 6, 1968 Western Union telegram, sent directly to J. Edgar Hoover, which stated simply: “PLEASE MAKE CERTAIN THAT TED KENNEDY GETS ALL THE PROTECTION HE NEEDS WE ARE DOWN TO ONE KENNEDY.”

Bobby was gone, the same manner as John before him, and now Ted was left as a living target. I don’t care how much of a beef you have against Ted Kennedy and his actions and politics; that telegram chills your bones.

As to the politics, however, once again we have more declassified files on Ted Kennedy producing yet more unsettling questions. As readers of my previous columns and books (click here and here) know, Ted Kennedy made a confidential outreach to Soviet despot Yuri Andropov in May 1983, evidenced by a stunning KGB memo. The goal was to undermine Ronald Reagan’s defense policies and, in my view, Reagan’s re-election prospects as well. That document, which has since been resealed in Russian archives, is published in full in Dupes.

Do the latest FBI files produce anything at this level? Well, it’s hard to equate degrees of outrage, but these items jump out:

Most serious are the documents relating to a July-August 1961 “familiarization tour” by Kennedy of several Latin American countries. Throughout, Kennedy expressed a curious desire to meet with “Leftists,” wanting to know what made them “think the way they do.” The documents note that Kennedy “met with a number of individuals” with “communist sympathies.” Kennedy asked ambassadors and State Department officials in these countries to help arrange interviews. One official was annoyed, describing Kennedy as a “pompous and spoiled brat.”

Ted’s behavior was not exactly angelic. Among his unique extracurricular activities, according to two of these documents (dated December 28, 1961 and October 20, 1964), was to attempt to “‘rent’ a brothel for an entire night.”

This aspect of the files fits with the roguish-philandering image of the late senator. More serious, however, is a particularly sobering item: Among the Leftists that Kennedy reportedly met with was none other than Lauchlin Currie, former close aide to FDR. As one of these documents dryly notes, “Currie’s name had been mentioned in Washington investigations of Soviet spy rings.”

That’s an understatement. As we now know, Currie was one of the most duplicitous Roosevelt advisers, widely suspected of Soviet espionage.

Why did Ted Kennedy want to meet with Lauchlin Currie?

But that doesn’t mean there aren’t witnesses who could be contacted for further information. Among the living is John Tunney, a former Democratic senator from California who was Ted Kennedy’s law-school roommate and close pal. Tunney was Kennedy’s liaison to the Soviets in May 1983. In this FBI file, he is listed as one of the individuals who joined Kennedy on this Latin America tour.

Tunney likewise might be able to comment on another stunner in these files: A claim that Ted and his brother, Bobby, were looking to parade around America a group of 100 Vietnamese children maimed by American napalm. A March 1967 memo contends that the Kennedy brothers were “plotting” such a scheme as a way to humiliate President Lyndon Johnson.

Finally, a November 21, 1962 memo in these files reports a fascinating tidbit: the muckraking columnist Drew Pearson was planning to report that 19-year-old Teddy had been rejected from attending “a school at Fort Holabird, Maryland, while in the U.S. Army” because of “an adverse FBI report which linked him to a group of ‘pinkos.’” According to this memo, when Teddy’s dad, Joseph P. Kennedy, heard of this, he threatened to sue Pearson for libel if he dared to print one word. The memo gives specific names and is grounded in what seems a very credible source (click here).

Of course, Joseph P. Kennedy has been dead for decades. He’s no longer a threat to our “journalists” doing their job. Will those journalists now, at long last, two years after Senator Ted Kennedy’s death, pause to investigate some hard questions?

This latest FBI file begs yet more answers on the doings of Ted Kennedy.

Editor’s note: A longer version of this article first appeared at American Thinker.