Trending Now
You are at:Home»Columnists»The Tough Work of Virtue
By Jake Frost on January 1, 2012 Columnists, Featured, Live in Christ, MyChurchParish.com 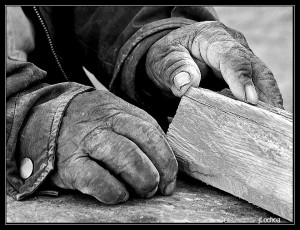 My grandfather was a hardworking man.  Growing up in frontier country, he started his career as a carpenter building barns; then travelled the West as an itinerant farm laborer.  In World War I, he enlisted in the Marines and fought in Europe, including the Battle of Belleau Wood and the Battle of Chateau Thierry.  He earned a purple heart and after the war became a gold miner in the Dakotas.  When the mines shut down, granddad returned to the carpentry of his youth.

My dad remembers roofing houses with him.  “I never thought about it at the time,” dad said.  “But looking back on it, he was already an old man by then, and there he was humping shingles up and down a ladder all day long, two bundles at a time.”

Times were tough, but granddad was too, and he needed money to feed his wife and kids.

One job he got was on a crew building a new house.  When it came time to put on the roof, the wood they were supposed to use was trash.  Granddad told his boss.  His boss said:  “Use it anyway.”

Granddad explained that the wood wasn’t fit for the job.

Granddad told him he wouldn’t do that.

“You’ll do what I tell you and use that wood to build the roof,” his boss said, “or you’re fired.”

Granddad gathered his tools and left the job site.

I thought of that when I read in Scripture about a man named Josiah.  The Bible tells us:  “He turned to God with his whole heart, and, though times were evil, he practiced virtue”  (Sirach 49:3).

There can be harsh consequences for following the road of virtue in evil times:  real consequences, like losing a job when you badly need a paycheck.  Yet the consequences of turning aside from the true Way . . . Well, in Christ in the City, Father George Rutler related a conversation between Sir Thomas More and his wife, Dame Alice, while More was imprisoned in the Tower of London.  Dame Alice pleaded with her husband to just sign the oath demanded by King Henry.  As Father Rutler recounted:

[Thomas More] said “Dame Alice, if I did sign this paper, you say I could enjoy my house and my gardens and my library.  How long do you think I could enjoy them?”

“Dame Alice,” [More said], “he would be a poor mathematician indeed, who for 20 years, nay 200 years, would risk the loss of all eternity.”

In the great and terrible scene of More’s trial in A Man for All Seasons, More is convicted by the perjury of Sir Richard Rich.  After Rich’s lie, Thomas More says:  “In good faith, Rich, I am sorrier for your perjury than my peril.”

As Rich turns to leave, More says to him:  “There is one question I would like to ask the witness.  That’s a chain of office you’re wearing.  May I see it?”

Sir Richard shows the chain with its enameled symbol to More, who says:  “The Red Dragon, what’s this?”

Sir Thomas Cromwell, a minister of King Henry and the prosecutor of More on behalf of the King, and the man who had just elevated Rich to his new office, answers:  “Sir Richard is appointed attorney general for Wales.”

Thomas More answers:  “For Wales.  Why, Richard, it profits a man nothing to give his soul for the whole world.  But for Wales?”

Now multiply the effect, because beyond the salvation of our own souls, there is another dimension to our call to virtue, one of particular concern to those of us with children.  In Prince Caspian, one of the books in C. S. Lewis’s Chronicles of Narnia, Lucy is travelling with companions in Narnia when they find their way blocked by a gorge.  To one side are steep cliffs, to the other the land slopes downward.  Lucy sees Aslan on top of the cliffs, and Aslan wants Lucy to follow him up to the heights.  But Lucy’s companions don’t see Aslan, and ignore her pleas to climb.  They choose to follow what seems to them the easier, downward slope; and Lucy goes with them.  In the end, what had appeared to be the easier way leads to problems and delay.  That evening, Aslan visits Lucy while her companions sleep:

For a time she was so happy that she did not want to speak.  But Aslan spoke.

“Lucy,” he said, “we must not lie here for long.  You have work in hand, and much time has been lost to-day.”

From somewhere deep inside Aslan’s body there came the faintest suggestion of a growl.

“I’m sorry,” said Lucy, who understood some of his moods.  “I didn’t mean to start slanging the others.  But it wasn’t my fault anyway, was it?”

The Lion looked straight into her eyes.

“You mean,” said Lucy rather faintly, “that it would have turned out all right – somehow?  But how?  Please, Aslan!  Am I not to know?”

“To know what would have happened, child?”  said Aslan.  “No.  Nobody is ever told that.”

“But anyone can find out what will happen,” said Aslan.  “If you go back to the others now, and wake them up; and tell them you have seen me again; and that you must all get up at once and follow me – what will happen?  There is only one way of finding out.”

The practice of virtue isn’t just for our own benefit.  It’s also for the benefit of everyone else on the journey with us.  On the radio many years ago, a man related a true story about a surprising encounter he had in a Third World country notorious for rampant corruption.  The man was a frequent business traveler to this country, and knew how things worked.  On one trip when he was stopped by a police officer, he pulled out some cash for the standard bribe.  But to his shock, the officer refused the money.

“What?” the man asked in confusion.

“I don’t take bribes,” the police officer said.  “I have children.  I want to leave them a better country.”

In his book Catholicism, Father Robert Barron noted that one of the motivations of Peter Maurin in founding the Catholic Worker movement was “to build a society in which . . . ‘it would be easier for men to be good.’”  The decisions we make influence our souls, certainly, but they also impact the world around us, changing it for the better or the worse.  Choosing virtue is one way the Lord has given us to wake our fellow travelers and lead them to follow Jesus unto the heights of heaven.  The police officer who refused a bribe awoke a world-weary businessman.  Thomas More’s example continues to lead people to this day, centuries after his rendezvous with the executioner’s block.  Everyday, in whatever little bit of space and time God has given us to inhabit, our actions contribute to making the world a place where it will either be easier or more difficult for our children to practice virtue.

If we’re willing to put our shoulders – small and weak as they may sometimes seem – to the great wheel of our age and try to nudge it in the direction of virtue, we may be surprised at the good we can do.  In A Christmas Carol, Jacob Marley said, with wisdom gleaned only from the other side of the grave, “Any Christian spirit working kindly in its little sphere, whatever it may be, will find its mortal life too short for the vast means of usefulness.”  Our problem isn’t that we can do but too little good, rather that we can do too much, “for this earth must pass into eternity before the good of which it is susceptible is all developed.”

Our lives aren’t long enough to accomplish all the good that can be done from right where we are, right now.  We have to seize the opportunities we have now – even (or maybe especially) when they look more like challenges than opportunities.  If we don’t, then as Aslan said, we’ll never know what might have been.  And if we do?  The answer is waiting for us to find it.  We might not learn it here and now, but whether it takes 20 years or 200, eternity is on our side.