Trending Now
You are at:Home»Featured»The Unseen Scars Are Often As Painful As The Ones Seen
By Dr. Mark W. Hendrickson on November 13, 2013 Featured 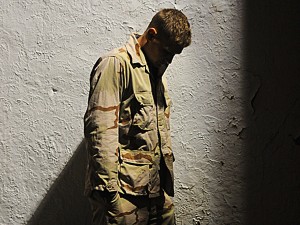 This truth applies to military veterans. Many return from their service scarred. Sometimes those scars are visible, as in the case of Ronny Porta, about whom I wrote last spring, or the Vietnam vet with whom I shared a poignant experience many Veterans Days ago. Other times, the scars are invisible.

The psychological wounds may be more common. A close friend and a cousin both have disturbing memories from their deployment to Vietnam. A young woman who played softball on my team in the ‘90s went through counseling after returning from Iraq a decade later.

The most vivid example of haunting memories came from the uncle who raised me. Pop was as tough and fearless as any man I’ve ever known, yet after a few stiff drinks at night, wartime memories that haunted him would come pouring out.

The experience that haunted him the most happened on the aircraft carrier Essex during World War II. Pop was in charge of making the planes flightworthy. One day, a fighter plane returned from its mission intact, except that when Pop checked the belly gunner’s turret, he encountered a gory sight. The belly gunner’s head had been blown off and the turret was a bloody mess.

With the ship’s chaplain conveying the messages, the captain of the Essex wanted to know if the aircraft could fly again. Yes, the plane could fly again, but the bloody mess within would smell horribly in the tropical heat. Pop recommended that the identity of the dead man be confirmed and that he be buried at sea in the plane in which he had given his life for his country. Upon receiving this message via the chaplain, the captain signaled “thumbs-up” from the bridge, and so the plane became a coffin that was pushed off the flight deck into the Pacific.

Decades later, when watching the TV documentary “Victory at Sea,” Pop saw video footage of that somber funeral service and heard the chaplain repeat Pop’s own words during the service. Pop passed in 1999, so he didn’t learn this, but two or three years ago, I learned the name of the man who was buried at sea. There is a website now where you can read about him and watch the “Victory at Sea” footage of his burial.

Pop had seen much death and destruction in the war, but he couldn’t shake the memory of this particularly vivid incident. Many times I had sat silently while Pop retold the story, doing my best to be a supportive listener. One night, while listening to this story for the umpteenth time, it seemed right to try to ease his torment. I decided to reason with him the way he had reasoned with me when I was growing up. “Pop,” I said, “ that belly gunner was no more dead than all the other soldiers and sailors killed in the war, and his death was more merciful than most, because it happened before he knew what hit him.”

My statements hit home. Pop snapped out of his dreamy, far off, reverie. His eyes took on a clear, focused look. “I suppose that’s so,” he acknowledged, and he then turned the conversation to less intense subjects. I sat with Pop during many more nights when he drank and reminisced before his passing a year later. Never again did he tell that story. That was one nightmarish memory that ceased to haunt him. He had finally processed it and moved on.

We can show our thanks to our veterans by welcoming them back after their tours of duty, by taking the time to express gratitude for their willingness to risk all and endure traumatic experiences in service to their country, by being ready listeners or giving them space when they don’t feel like talking about what they went through.

To all of you out there who have served: Thank you and God bless. May your Veterans Day bring comfort and peace to you.