Trending Now
You are at:Home»Featured»The Unsettling Witness of Pope Francis
By Kathleen Woodman on September 30, 2013 Featured, Live in Christ 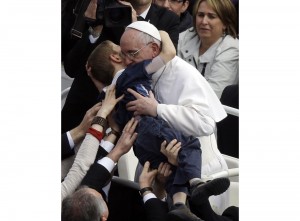 For a pontiff who is so big on emphasizing mercy, Pope Francis knows how to make me squirm. His witness for Christ turns the tables on my tendency to make my faith all about me. With a steady stream of up-ending spiritual remarks, the Holy Father has a way of capsizing my comfort zone. His shake-things-up style prompts me to reconsider everything I do as a Christian. As spiritual head of the Catholic Church, he wants me to understand the spirit of the law, not just the letter. He confronts me to not get comfortable in a prison of black and white thinking, but instead, be open to thinking in color. The unsettling message is this: the Christian life is supposed to be demanding, or it’s not worth much.

And it’s not just what the pope says; he reinforces it with what he does.  Just like Jesus did, the Holy Father will leave behind “little t” traditions, if they seem to no longer promote the kingdom of God. He explains the importance of discernment: “The wisdom of discernment redeems the necessary ambiguity of life and helps us find the most appropriate means, which do not always coincide with what looks great and strong.”   He’s a WWJD (What would Jesus do?) man. The picture of him washing the feet of a Muslim woman prisoner perfectly captures one of his WWJD moments.

Because canon law was not strictly adhered to, the pope’s foot-washing act of mercy was enough to give any conscientious canon lawyer a start. Nevertheless, as Supreme Pontiff of the Universal Church, Pope Francis had the authority to do what he did. In spite of that, there was a considerable amount of sweaty hand-wringing all over the Catholic gossipsphere by gloomer and doomers who would love to trade Pope Francis in for a new model. They totally missed his message. Their reaction brought to mind the following Bible passage:

Woe to you, scribes and Pharisees, hypocrites! For you tithe mint and dill and cumin, and have neglected the weightier matters of the law, justice and mercy and faith; these you ought to have done, without neglecting the others. You blind guides, straining out a gnat and swallowing a camel! Matthew 23-24 RSV

Without moving or changing one iota of essential church teaching, the pontiff manages to reject Pharisaical evaluations of people, places, and things. Remarkable, this Holy Spirit-led papacy. The trouble is, the pope’s true message can’t be captured in a sound bite. Case in point, some secular media reporters who use cut-and-paste reporting have given people the impression that the pope thinks the Church should disregard its teachings on contraception, abortion, and gay marriage. Not happening.

Pope Francis, far from abandoning the truth, is instead refusing to break down the integrated richness of the gospel into only three issues. This is entirely different from saying that these issues are no longer important! In fact, he recently demonstrated this by speaking out against abortion as being part of a “throw-away culture.”  Even so, he doesn’t want us to lose sight of the fundamentals. Jesus Christ Himself is at the center of our faith. Without Him, there’s no reason to be Catholic. We need to have a relationship with Jesus! As the Holy Father puts it, “The most important thing is the first proclamation: Jesus Christ has saved you.”

The Church has always stood for the fullness of the entire gospel. Remember the corporal and spiritual works of mercy? You know, things like feed the hungry, visit the prisoners, and comfort the sorrowful? They haven’t gone away.  The pope is reminding us to live the complete Christian life, not just what we think is important or advantageous to us. As Father Fortea points out in his blog, “We need to listen to the Pope, not in order to ratify ourselves in our own positions, but rather to learn.”