Trending Now
You are at:Home»Columnists»Theology Lessons from a Two-Year Old
By Jake Frost on December 3, 2011 Columnists, Featured, Parenting 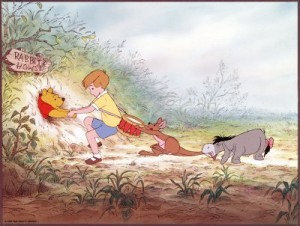 Human beings have a desire to impose order on the universe.  But much like a parent’s desire to impose order on their kids’ toys, it often goes unsatisfied.  With the toys, at least we have a fighting chance (depending on the age of the kids and the volume of plastic flowing in from grandparents – and what is it about toys with innumerable little pieces and parts that delights grandparents so?).  With the universe, it’s just too big – and we’re just too small.

I had an interesting experience watching a movie with my oldest daughter who’s two and a half.  We were watching an animated Disney movie.  It seems that animated movies are all we watch these days, and a prerequisite for any video entertainment in our household is the presence of talking animals.  It’s funny how times change.  In college we spoke in a code comprised of lines borrowed from Seinfeld and Cheers.  Now I find my conversations peppered with references to movies like Ratatouille and Winnie the Pooh.  If an intellectual concept can’t be conveyed in analogies drawn from the pre-school canon, I doubt my ability to communicate it.

Anyway, there we were watching our animated movie, and though it had the required talking animals, it was just a bit too advanced for my daughter’s two-year-old brain.  She couldn’t follow the plot, grasp who the characters were, or understand their relationships to each other.  What was interesting, though, was that she satisfied her need to draw order out of the chaos by imposing a meaning of her own devising on everything she saw and heard.  As we watched the movie together, she re-narrated the whole thing, making up her own story that incorporated all the elements present in the movie, but fit them together in a new way that had nothing to do with the actual movie.  She even re-named the characters with her own identifiers (such as “the red lady” and “the little mouse”).

Her re-configured story emerged in real time, blow-by-blow as we watched the movie.  “So there the red lady is talking to the little girl, and she’s wondering if the little girl wants to do a craft,” she’d say, when in actuality the “red lady” was the villain of the movie and was conniving against the “little girl,” who was the heroine and victim.  Then the movie cut to the next scene and we’d see one of the talking mice.  “And there is the little mouse,” Liz noted.  “He’s going to do a craft with the little girl and the red lady,” when actually the “little mouse” was trying to rescue the “little girl.”  And so it went throughout the whole movie.  That night our daughter was still working over the whole thing, refining, embellishing, and explaining it all to me as I put her to bed.

I was reminded of a story related by Father Robert Barron in Catholicism, the companion book to his wonderful Catholicism video series, about “William James and his dog”:

In an essay toward the end of his life, the great American philosopher told of his dog, who would typically enter his master’s office at the end of the workday to receive a pat on the head.  The animal, James explained, would look around the cluttered room and see the thousands of books on the shelves, the many papers covering the desk, and the globe that rested in the corner.  He would see them but understand them hardly at all.  And if James made bold to expatiate on the meaning of these things – that the books were collections of symbols evocative of ideas, that the papers, by a similar semiotic system, conveyed intelligent messages, that the globe was a representation of the spherical planet that both master and dog inhabited – the animal would have looked at him with utter incomprehension.  But then it occurred to James that we are in a similar relation to a higher mind.  Is it possible that we, like the dog, see everything there is to see, but actually understand it in only the most superficial way?  And is it the case that the higher intelligence could not, even in principle, begin to explain the deepest meaning of things to us, due to the limited capacity of our minds?

Maybe the main difference between humans and dogs is that we bipeds are more prone to what Hilaire Belloc in The Path to Rome called, in a classic Bellocism, “intellectual pride, than which no sin is more offensive to the angels.”  We think we know more than we do.

It’s in our Egypt moments especially we need to remember that “He does great things beyond our knowing; wonders past our searching out.”  Job 37, 5.  There are times when God calls us to arise and venture forth on a great journey, but all we can see from where we sit in Egypt is the Dead Sea blocking our way ahead, Pharaoh in hot pursuit behind, and beyond a desert full of thirst and starvation.  To us God’s call can seem nonsensical, difficult in the extreme, even frightening.  That’s when we need to keep in mind that we “know not the work of God which He is accomplishing in the universe.”  Eccl 11, 5.

C. S. Lewis wrote of our condition in The Horse and His Boy.  The boy in the story is named Shasta and he is lost in the mountains, trying to make his way through to Narnia:

He had never been in mountain country before . . . the sun was getting ready to set . . . Then they plunged into the fog, or else the fog rolled over them.  The world became gray.  Shasta had not realized how cold and wet the inside of a cloud would be; nor how dark.  The gray turned to black with alarming speed . . . he could see nothing at all.  * * * * * [And then he had] a sudden fright.  Shasta discovered that someone or something was walking beside him.  It was pitch dark and he could see nothing.  And the Thing (or Person) was going so quietly that he could hardly hear any footfalls.  What he could hear was breathing.  His invisible companion seemed to breath on a very large scale . . .

The invisible companion turns out to be none other than Aslan himself.  Shasta makes it through the mountains and the next day after the sun rises he “turned and looked behind him . . . ‘I see,’ Shasta said to himself . . . ‘I must have come through the pass in the night.  What luck that I hit it! – at least it wasn’t luck at all really, it was Him.”

That’s the situation we are all in:  traveling through a thick fog, at night, in unfamiliar country, trying to make our way through.  And it’s good to know that, like Shasta, we’re not alone.  The large scale but invisible He is with us, and He will keep us on track and lead us to safety, if we will heed His direction.  It was our Mother Mary, in her last words recorded in the Gospel, who told us at Cana how to find our way:  “Do whatever He tells you.”  Jn 2, 6.

And the funny thing is that, even with our limited understanding, if we do choose to follow Him in our blindness, we can come to see.  For as Scripture also promises:  “Those who trust in Him shall understand truth . . .”  Wis 3, 9.