Trending Now
You are at:Home»Learn & Live the Faith»Catechesis»Theology on the Tea Cups
By Nic Davidson on November 30, 2012 Catechesis, Featured 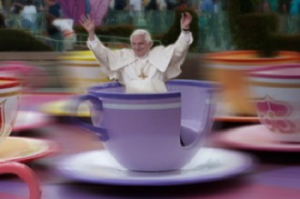 “Forget about man-made religion, man!  Do you have a personal relationship with Jesus Christ?”

It is likely that we’ve all been on at least one side of that question, possibly both.  Before leaving Assemblies of God, I was one of the loudest and proudest when it came to purposefully shearing off anything that I decided was an “unnecessary religious trapping”.  Everything was fair game for the cutting floor, from a disciplined prayer life to the necessity of holiness.  In my entrenched confusion as to the nature of grace, I even adamantly opposed needing to apologize for sins on a regular basis, taking sides with the wretched tag line from “Love Story”: “Love means never having to say you’re sorry.”  And you can bet your scapular I would have scoffed at differences of opinion regarding which direction a priest (heretic) faced during a ritualistic, stuffy church service.

The transition from that airy theological background to the depths of Catholic thought was slow going, even after getting hired to work with Catholic youth (before I had converted, mind you).   Then, it happened.  During a casual conversation with my boss, Fr. Eric Hastings, about his then-recent decision to begin celebrating Mass “ad orientem”, or with the priest facing the same direction as the congregation, I questioned him about why he thought it was important.  He said, “Well, you really need to read……..no……nevermind…(then came the dare)…You’re not ready, yet.”

I balked and stuttered, “Not ready for WHAT??? What do I really need to read?”

“Oh, just a book by Joseph Cardinal Ratzinger called The Spirit of the Liturgy, but, really, nevermind.  Forget I said anything”.

“Alright, I will.” I said, and walked straight into my office and purchased it.  About a week, and 224 pages, later, I was as giddy as Lloyd Christmas.  In one literary swoop, my entire approach to Mass had changed, or at least deepened.  I truly felt as if B16 had led me by the hand to the outside of a Cathedral, smudged the fog from a window, and lifted me up to let me peer inside.  You wouldn’t believe what I saw waiting on the inside of what I’d considered to be mere ritual and possibly empty tradition: “intimate friendship with Jesus, on which everything depends.” (B16, Preface toJesus of Nazareth)

That’s right, friends; at the heart, or spirit, of every, single second of the Mass is the very same “personal relationship” that I’d once assumed was missing in the midst of the minutiae of Catholicism.  In his book, our kindly Papa essentially takes us on a guided tour through the liturgy, or ”Disneyland of theology”, as I call it, making stops to explain the “why” behind the “what”. (Yes, you’ll be singing “It’s A Paul World, After All” for hours, but at least you get a thrilling ride on SpeSalvi Mountain!)   As we cruise past various attractions, Baba Bene grabs the mic and gives a fuzzy-speaker history lesson of each, starting with worship:

“Man…puts God…into the light (and that is what worship is), when he lives by looking toward God.”(p20)

Boom.  The heart of liturgy is worship, and worship is simply taking your eyes off of everything else around you and looking at Him, which finds its culmination in, “Behold, the Lamb of God. Behold, Him who takes away the sins of the world.”  As the monorail begins moving, you’re still furiously taking mental notes, and you hear him in the background saying, “Liturgy implies a real relationship with Another, who reveals himself to us and gives our existence a new direction.”  But there’s no time to ponder more because you’re already coming up on “The Altar”.

“Looking at the priest has no importance.  What matters is looking together at the Lord. ”(81)

If the Mass is liturgy “on the way”(50), then it’s silly for our lead parish pilgrim to be walking backwards at the most pivotal moments on the journey.  I like face time with my friends just fine, but when my wife walks into a room, I want everyone to see her and forget I’m even there.  How much more so when the Messiah arrives?  Now our guide moves on to the nature of sacrifice…

“The common view is that sacrifice has something to do with destruction. What pleasure is God supposed to take in destruction? (27-28)

This God we’re falling in love with and fixing our eyes on, has NO desire to destroy anything we hold dear; that is not what sacrifice was/is about.  Sacrifice is about redemption and healing.  Our loving Father wants us to offer our lives on the altar with the Son’s to raise it to new life, spotless and without blemish, NOT to take away everything we love and have us on a kneeler until we die of exhaustion or old age, whichever strikes first.  The tram pauses to let us see the heart of the Responsorial Psalm…

“In the psalm the hearer internalizes what he has heard, takes it into himself, and transforms it into prayer, so that it becomes a response.” (81)

So, during the Responsorial Psalm, we’re not supposed to let our minds go blank, pocket text, or catch a cat nap until we have to stand again?  Instead of even trying as hard as we can to remember the words to the response, we should listen to the words of the verses, allowing them to seed, grow and bear fruit, so that when we DO get to sing again, it has meaning.  If we let that sink in, the Psalm becomes MUCH more fun.  There is no time to process as we speed our way to the final stop, but we hear snippets like:

“ In these rites I discover that something is approaching me here that I did not produce myself, that I am entering into something greater than myself…” (165)

“The life of the liturgy does not come from what dawns upon the minds of individuals and planning groups.  On the contrary, it is God’s descent upon our world, the source of real liberation.”(168)

Suddenly, the train stops, and nothing else matters but what your guide says next:

“The Consecration is the moment of God’s great action in the world for us.  It draws our eyes and hearts on high.  For a moment the world is silent, everything is silent, and in that silence we touch the eternal—for one beat of the heart we step out of time into God’s being-with-us.” (212)

There it is.  Personal relationship.  Intimate friendship.  I am my Beloved’s and He is mine.  Every kneel, nod, and response has been seamlessly wooing you to this moment. The buzzing distraction dies, the troubles are tossed on the altar for healing, space/time is rift, heaven kisses earth, and we have Immanuel, “God with us”.   You find yourself blissfully thankful for the minutiae, the sacramentals, the rituals, the Traditions, the Rites, and the religion, because they safely and successfully brought you here, to consummation.

As you walk away from what you thought would be a casual sight-seeing tour, you realize you are desperate to actually experience these attractions, feeling a bit sheepish that you ever thought this place was boring.   At least, that’s what happened when I read the book.

This article courtesy of Ignitum Today.