Trending Now
You are at:Home»Featured»They Are People, Too!
By Robert J. Gieb on November 7, 2011 Featured, Life Issues & Bioethics 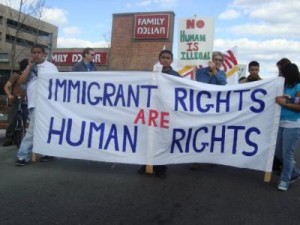 Protecting immigrants from oppression is a centuries old duty of both Jews and Christians. “You shall not oppress or afflict a resident alien, for you were once aliens residing in the land of Egypt. Exodus 22: 20.” Most, if not all, of the people with whom I work in the pro life apostolate take that duty seriously. Some of them may be opposed to illegal immigration, or may in good faith disagree with various proposals to resolve current immigration problems, but there is no disagreement that unjustly oppressing immigrants is wrong. It is a matter of respecting life.

So it was with some surprise when I saw the Chrysler PT Cruiser roll into the abortuary parking lot. The driver, a young female employee at the abortuary, parked, exited her car, and went inside. Written on the side windows of the woman’s car was this message: “Immigrants are people too!” Apparently recent reports in the media about immigration disputes had motivated her to publicly communicate her concern about fair treatment of immigrants. However, there was something that the abortion worker did not consider: The newly created — newly arrived! — unborn child is an immigrant too, and an illegal one as well.

So those little human persons who can be seen on sonograms in hundreds of different locations in this country-moving and breathing, residing in a womb, but most definitely living — are doing that residing and living here in the United States of America, but not as citizens. They can be legal citizens if they get to be born, but not before. Worse yet, since the legal insanity of Roe v. Wade, they are not even granted the status of humanity until birth.

That means that one place where, without ambiguity and with absolute certainty, the immigrant who is unjustly oppressed is in the womb of a woman who is lying on the table allowing an abortionist to take the life of her unborn child. There is no immigrant more oppressed and afflicted than that human being.

The irony of the local abortion worker arriving at an abortuary, where she would help kill a dozen or more human beings before lunch, advertising on the side of her car her sincere belief that immigrants should be treated fairly because they are human beings, was breathtaking. And apparently lost on her. (Chesterton comes to mind: “Truth, of course, must of necessity be stranger than fiction, for we have made fiction to suit ourselves.” Heretics)

Despite her cognitive disconnection, the abortuary worker’s window message was nevertheless true. Immigrants are people. But if they are people then they are human people, and that includes unborn immigrants. Contra Roe vs. Wade, they are no less human than the rest of us. The existence of their humanity, unlike citizenship, is not dependent on the event of birth, and it does not cease to exist at the door of the abortuary any more than it ceases to exist at the border.

In truth, between conception and birth we were all resident aliens of the womb. But we were spared the fate of those unborn children whom the “pro immigrant” abortion worker helped to kill that day. Indeed, I am writing this essay, and you are reading it because we were fortunate enough not to have been deported from the womb via some abortionist’s suction tube.

So when individuals like the abortion worker and liberal judges, as well as activist groups and politicians proclaim themselves to be advocates for just and humane immigration policies, but support abortion on demand, they reveal themselves to be liars. They show themselves to be the most ardent advocates not of justice, but of the oppression and affliction of immigrants. Furthermore, leaders and members of Christian and Jewish religious denominations and organizations who quote Scripture and excoriate Americans for failing in their moral duties to immigrants, while zealously promoting the blood trade of abortion, are liars and hypocrites in the extreme.

This essay began with verse 20 of Chapter 22 of the book of Exodus. The next three verses of Chapter 22 warn us that we must not only refrain from oppressing the alien, but widows and orphans as well. “You shall not wrong any widow or orphan. If ever you wrong them and they cry out to me, I will surely listen to their cry. My wrath will flare up, and I will kill you with the sword; then your own wives will be widows, and your children orphans. Exodus 22: 21-23.”

I cannot presume to predict the actions of the Divine, but I am compelled to think that if His wrath will “flare up” for ill treatment of widows and orphans, it will surely “flare up” as well for those who take up the sword against the innocent resident alien in the womb.