Trending Now
You are at:Home»Learn & Live the Faith»Catechesis»They’re All With Us
By Robert J. Gieb on May 19, 2016 Catechesis, Evangelization, Featured, History 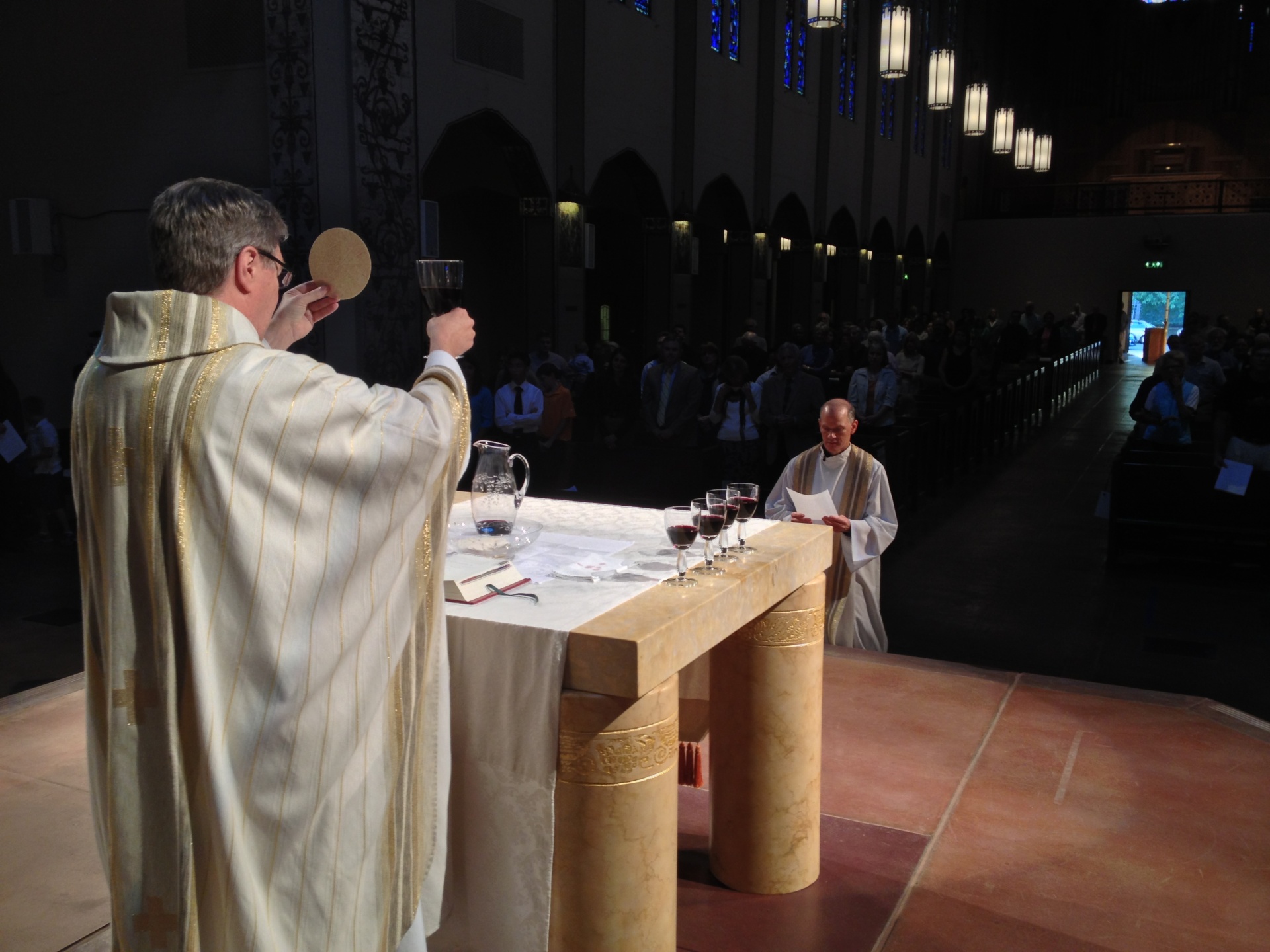 We as Catholics believe that at death our material bodies are temporarily separated from our non-material souls until the end of time. We believe that at the end of time our bodies will be resurrected and re-united with our souls for eternity. For those who lived righteous lives their reunited bodies and souls will be glorified in Jesus Christ, and brought into the joy and ecstasy of eternal Trinitarian love. “Eye has not seen, nor ear heard, nor have entered into the heart of man the things which God has prepared for those who love Him” (1 Corinthians 2:9).

Eternity will be given as well to the reunited bodies and souls of the damned, but their existence will be eternal deprivation of that same Trinitarian love. Indeed it will be deprivation of all love since even human love is created and supported and can exist only by the power and presence of Trinitarian love. Eternity without love is aptly described by St. Mark: “Where their worm dieth not, and the fire is not quenched” (Mark 9:4).

When my two-year-old grandson sees a bird or plane fly over or a car pass by on the street he raises his arms, opens out his hands, and asks: “Where they go?” And so we may ask about the souls of the deceased from death until that time when the Son of man is seen “coming in the clouds with great power and glory.” Where do they go?

We believe that before the end of time and the reunion of the body and soul, the souls of the righteous believers who have died in faith in the Lord Jesus are either being purified in purgatory in preparation for their admission into heaven, or having been purified already rest in the embrace of the Holy Trinity. The souls of the damned are living a preview of eternity without love. So we know where they go.

We know, and so we pray for those souls who are undergoing purgation and are being refined like gold so that their souls may go in haste to Jesus as the shepherds did at Bethlehem. It is our duty, even if we may be less conscientious about that duty than our Catholic ancestors of decades past who had a more healthy respect for the judgment of God, less hubris about things religious, and a more keen sense of our sinfulness.

One of the benefits of praying for the souls in purgatory and for the intercession of those souls already in heaven is that it brings into our consciousness the truth that we are all members of the communion of saints who continue to worship the same living God. That in turn reminds us that while the sacred liturgy is local to our historical place, it is also, most importantly, part of a universal and ongoing offering of praise and thanksgiving. In short, our interaction with the communion of saints brings to mind the cosmic dimensions of the celebration of the Mass.

The Catechism of the Catholic Church instructs us on the communion of saints, and what are known as the three states of the Church. “When the Lord comes in glory, and all his angels with him, death will be no more and all things will be subject to him. But at the present time some of his disciples are pilgrims on earth. Others have died and are being purified, while still others are in glory, contemplating ‘in full light, God himself triune and one, exactly as he is’ ” (CCC 954).

These three states are not islands unto themselves, but as with all creation are supported and held together by the creative love of Jesus as “one family of God.” “For if we continue to love one another and to join in praising the Most Holy Trinity – all of us who are sons of God and form one family in Christ – we will be faithful to the deepest vocation of the Church” (CCC 959).

It is precisely because all of us who claim membership in the communion of saints do in fact “continue to love one another and join in worship of the Most Holy Trinity” that we know that at the celebration of the Holy Eucharist we are not alone with the Divine. Rather we are joined by those kneeling in the pews next to us, and even those on earth who are with us in desire or spirit if not physically present. And there is much more.

Those multitudes of souls in purgatory, suffering and groaning in hope as they are refined for eternal union with Goodness itself. They are present at Mass with us.

Those already purified and now in the precincts of heaven. Adopted children of the Father, brothers of His Son. Glorified souls waiting for union with their glorified bodies. Saints one and all, drenched in Divine love and made God-like. They are there with us too.

It is not that the communion of saints cannot exist outside of the Mass. However, our Eucharistic worship of the Trinity is what makes any understanding of communion possible.

But where is our awe? Where is the profound wonder about all of this? Do we still not understand? It is true that burdened with the effects of original sin we see only through the glass darkly, and that it will be only after death when we will be allowed to see the face of God in all of his glory that we will “be like him.” Yet is it not also because of our weak faith and lack of attention at Mass to the promises of Christ that so many of us approach the mystery of the Eucharist with such indifference, and lack of insight or understanding?

Perhaps it would help if we truly accepted the fact that in the sacred liturgy what appears to be merely earthly is not that at all. The never ending sacrifice of Jesus to the Father is opened wide to us in the Mass. Heaven meets earth. The infinite touches the finite.

To the entire communion of saints – pilgrims on earth, souls in purgatory, and saints in their glory in heaven –  God extends his invitation to approach and come near to him in the Eucharist. He invites us to enter into communion with the very person of Jesus, and in turn with the Father in their profound unity in the Holy Spirit. Jesus’ prayer to the Father is never ending, and always answered in Holy Communion: “And I have given them the glory you gave me, so that they may be one, as we are one, I in them and you in me, that they may be brought to perfection as one” (John 17:22, 23).

Therefore we know “where they go,” and God bids us to go there too. There is no reason to be so preoccupied with earthly distractions at Mass that we fail to appreciate the truly cosmic dimension of the sacred liturgy. We are in the presence of him who is the creator and sustainer of all. Present and prostrate with us before the throne of the most high in worship of the Trinitarian Divinity at each Mass is every soul in purgatory and every saint in heaven, in an indescribable communion of praise and adoration.

We could do no better than to heed the admonition of Pope Benedict XVI to the monks at Heiligenkreuz Abbey in 2007:

I ask you to celebrate the sacred liturgy with your gaze fixed on God within the communion of saints, the living Church of every time and place, so that it will truly be an expression of the sublime beauty of God who has called men and women to be his friends!