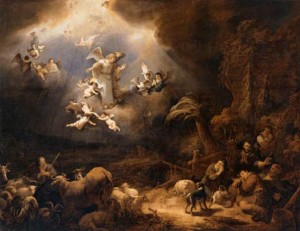 After the Confetior and a few short prayers (such as the Kyrie), the priest then intones the Gloria by proclaiming the first few words aloud:  Gloria in excelsis Deo, Glory to God in the highest.  We are reminded of the night Christ was born, when the angels proclaimed this very phrase to the world.

What we might not realize is that we are joining the angels in that proclamation.  The angels said these words to announce to all humanity that a savior had arrived.  In the singing of the Gloria we announce every part of the Gospel for the world, and as a reminder to ourselves of that Gospel.

Any non-believer who enters the Church will find out that, in this chaotic world, there is someone who is in complete control.  He will find that said person in control loves them and wants nothing but the best for them, so much that He sent His only son to remove the largest barrier between God and man:  sin.

Another thing about the Gloria you might not have realized is the Gloria helps tell people what is going to happen at this liturgy.  We are blessing, adoring and glorifying God through our song and sacrifice.  When the Eucharistic Sacrifice is offered to God, the sins of the world are taken away.  Finally, this sacrifice is offered with the Holy Spirit (who makes the consecration possible) in the glory of God the Father, that is, in his presence.  During Mass, heaven and earth become one, as all creation offers Jesus Christ within the Father’s presence.

The next time you are at Mass, make sure you actually sing the Gloria like you mean it, because the person next to you (or maybe even you yourself!) might need to hear what is being proclaimed.