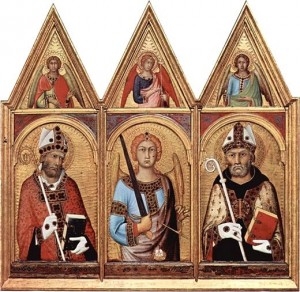 When calling for the reform of the Sacred Liturgy, the Second Vatican Council said the following:

The rites should be distinguished by a noble simplicity; they should be short, clear, and unencumbered by useless repetitions; they should be within the people’s powers of comprehension, and normally should not require much explanation. (Sacrosanctum Concillium 34)

When this was implemented, one of the ways this was done occurred during the Confiteor, or general confession.  In the Extraordinary Form, when announcing our sinfulness, the names of several saints are included by name.  In the revised liturgy, we simply make this proclamation and plea for intercession before all the angels and saints.    I think in doing so we could have lost a pretty powerful reminder in the liturgy of the reality of the communion of saints.

If useless repetition is a real worry (and it can be when the saints just become a bunch of names to speed read off a list), there can also be a worry about “the saints” becoming some distant abstract entity we can’t really identify with.  The Bible has always concerned itself with this tension.  God wishes to be remembered by his people not just because of some past deed they can’t identify with, but what he is doing in their life at this very moment.  (Jeremiah 23:7)  St. Luke tells the story of the birth of Christ not just as some legendary tale, but something that occurred within a specific place and time, namely during the time Caesar Augustus, Herod, Cyrinus and Pontius Pilate walked the earth.  Luke could have said “during the time the Roman Empire occupied Israel” and it would have been true, but naming everyone like he did gave it a concrete reality.

This concrete reality is manifested in the liturgy in two ways.  As we begin the Confiteor, we confess our sins not just to God, but to the whole communion of saints, with Mary, Michael the Archangel, John the Baptist, and the Apostles Peter and Paul.  (Every time we do this, a Protestant, who thinks we only confess our sins to a priest as horribly unbliblical, his head explodes.)  We tell our mother that we haven’t lived up to what she expects of us.  We tell our protector that due to our sinfulness, he will have to protect us yet again.  John the Baptist called us to repent and do good works, and we tell him of our failure.  Finally, we tell those who founded our Particular Church that we have dragged its name through the mud due to our sins.  When we mention these saints, we are telling the most important figures in our lives that we aren’t making them proud by our actions.

After this confession, we have a plea for intercession.  When we reflect upon each saint, we can learn more about the power of this intercession.  With Mary, she can teach us how to follow her son, to “do whatever he tells you.”  Through the centuries that the Archangel has protected the Church, surely he has learned ways we can avoid our failures.  John the Baptist revealed Christ to the world, surely he can help reveal Christ to us in a deeper way.  Finally, we turn to the founders of our Church to seek their guidance and wisdom.

Once this is all done, the priest asks that God have mercy on us, forgive us our sins, and bring us to everlasting life.  To counter our Protestant friends, we ask those saints only for guidance.  When it comes to mercy and forgiveness, that is something only God provides.  Without mercy, all of those other things amount to nothing.  Those saints can teach me everything, but I can’t obtain eternal life on my own.  The Council of Trent tells me that none of these things can merit salvation.  (Session 6, Chapter 8)

The only thing that can give me salvation is God’s grace, and there’s nothing I can do to earn it.  All I can do is ask, and ask the entire heavenly court to join me in doing so.  By choosing specific saints to name, it helps us to better understand “the saints” as a concrete reality, and we can look forward to the day we are numbered among them in heaven.