Trending Now
You are at:Home»Learn & Live the Faith»Catechesis»This Is The Stuff of Which Martyrs Are Made!
By Bishop Robert C. Evans on January 3, 2013 Catechesis, Featured, The Shepherd's Voice 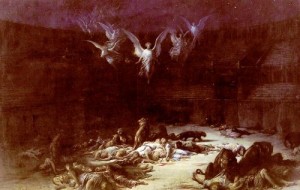 Homily for the Solemnity of Mary, Mother of God

A new year invites us to think of goals we would like to achieve and resolutions we want to make. In short, it seems to be the ideal time for renewal and commitment.

However, in all honesty, do we really expect 2013 to be different than 2012 or any other year for that matter?  On the one hand, we would like to think that we are growing in our knowledge of and our love for God; on the other hand, we see signs that clearly contradict God’s revealed truth, such as the so-called right to abortion remains unimpeded and the morally repugnant re-definition of marriage that seeks to legitimatize immoral behavior condemned in both the Old and New Testaments.

Sadly, we are entering upon an era that has relegated the revealed Word of God to the status of opinion, and the truth to a relativism whose measure of acceptance is the human appetite for pleasure and convenience.

I truly believe that loyal Christians will once again be in the minority when it comes to the burning moral issues of our day, as we learn the limits of a democratic government that depends on the whim of a majority rather than on the unchanging truth that wrong is wrong if everyone is wrong, and right is right if no one is right.  This is the stuff of which martyrs are made!

May I respectfully suggest that the challenge of 2013 is not unlike that faced by the Blessed Mother whose feast we commemorate this day.  Mary became Mother of God not through any merit of her own but because she put aside every desire, every wish, every hope for her own physical or material happiness in order to allow God to work through her for the benefit of the human race.  Indeed, God became man because one woman surrendered her autonomy, did not insist on her rights and put the needs of others before her own.

As we move into this new year, please remember that civil laws may change but God’s law for human nature does not change.  You and I are created in the image of God not the government, and on this new year’s day we re-affirm our belief that a benevolent God watches over us, despite our inadequacies, failings and even our sins.  If there is one resolution we should make, we do no better that resolve to be on God’s side.  A happy and faith-filled New Year to all of you!