Trending Now
You are at:Home»Columnists»The Life and Formation of Saint Thomas Aquinas
By Angela Adkins on March 12, 2013 Columnists, Featured, Uncategorized 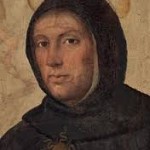 Born in Aquino, Italy, in 1225, at “the Roccasecca, the castle whose name means ‘dry rock or fortress’”, Saint Thomas Aquinas is thought to have been “one of the most powerful thinkers in the history of Western civilization”.[i]  In 1231, Thomas was sent by his parents to the Benedictine abbey of Monte Cassino, “in the hope that he would eventually choose this way of life and become abbot of the ancient monastery”.[ii]  This was a normal custom for a young boy of the Italian nobility, for his father, Landolfo, was the Count of Aquino, and his mother, Theodora, was the Countess of Teano.  Eight years later, Thomas, then thirteen or 14, was sent to the University of Naples for additional academic guidance.  It was here that he studied grammar, logic, natural science, and astronomy, standing “high among those who belonged to his year at the university”.[iii]

In 1243, Thomas made a choice that set the path for his religious life.  Against his family’s hopes, he joined the Dominican brotherhood. “Thomas had become attracted to the Dominicans with their ideal of evangelical poverty, study, and service to the Church without ecclesiastical preferments”.[iv]  When word of this reached his family, they were not happy.  Thomas’ mother made her way to Naples in an attempt to persuade him otherwise.  “The Dominicans, fearing she would take him away, sent him to Rome, his ultimate destination being Paris or Cologne”.[v]  Theodora sent a message to her other sons, asking them to stop their brother.  It is not fully known as to how his brothers restrained Thomas, but he was locked up in a tower in the castle of Monte San Giovanni.  No matter what his family said to convince him to leave the Dominican life, he was strong and unyielding.

As the months passed on, Thomas wondered if he was going to be in custody forever.  While praying in the tower, Thomas asked God if he was truly meant for the friar life.  Soon after, two shining angels appeared, carrying a piece of cord with fifteen small knots, and tied it around his waist.[vi]  From that point on he made a promise to himself that he would wear this cord at all times.  As his life went on in prison, Thomas read and re-read the Bible, memorizing most of it.  However, when Pope Innocent IV and Emperor Frederick II heard of Thomas’ imprisonment they gave orders for his release.  The family followed suit for they were afraid of these religious leaders.

Once Thomas was free, he pronounced his vows and was sent to Rome.  Closely, Innocent IV examined his motives in joining the Friars Preachers, dismissed him with a blessing, and forbade any further interference with his vocation.[vii]  In 1245, Thomas attended classes under Father Albert of Cologne, one of the most skillful professors of the order.  It was here, at Cologne, that Thomas received his nickname, “The Dumb Ox”.  Being a timid man, many believed him to be dim-witted.  However, “after reading Aquinas’ thesis and thinking it brilliant, Father Albert proclaimed in Aquinas’ defense, ‘we call this young man a dumb ox, but his bellowing in doctrine will one day resound throughout the world’”.[viii]  Later that year, Albert was sent to Paris and brought Thomas with him as a student.  Three years later, they returned to Cologne, and Albert chose Thomas “as his assistant in the newly organized studium generale”, a Medieval university.[ix]  At the age of twenty-five, Thomas was ordained to the priesthood by Archbishop of Cologne, Conrad of Hochstadt.

In 1252, John of Wildesgausen, fourth Master General of the Dominican Order, “asked Albert to recommend a suitable candidate for the doctorate at Paris”.[x]  Albert suggested Thomas, who then made his journey to France.  Unfortunately, due to political troubles in Paris, there was a five year long interruption before Thomas could present himself for examination.  In October of 1257, Thomas accepted the degree of Doctor of Theology.  From there, he taught, traveled, preached, and wrote.  With sixty known achievements under his belt, Thomas wrote from “commentaries on the Bible to discussions of Aristotle’s writings on Natural Philosophy”.[xi]

As the years passed, the quality of Thomas’ works began to dwindle.  It was on December 6, 1273, that the forty-eight year old Thomas Aquinas ended his writing profession.  During Mass, at the Dominican convent in Naples, Heaven was revealed to him in a vision and he soon lost all interest in theological questions or writing in general.  A month later, on his way to Lyon, France, to serve on the Second Council, poor health overcame Thomas.  On his deathbed, at the Cistercian monastery of Fossanova, Italy, Thomas “asked that the Song of Solomon be read to him from beginning to end”.[xii]  On March 7, 1274, Saint Thomas Aquinas passed away.  As the patron saint of Catholic academics and theologians, Thomas was canonized in 1323 by Pope John XXI.