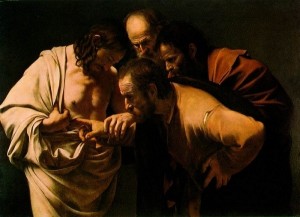 For St. John the Apostle, the empty tomb was all he needed to experience to believe in the Resurrection. But two who were later to be saints – Mary Magdalene and Thomas – began the first Easter season as nonbelievers. Mary Magdalene arrived at the tomb not to assure herself that Christ is risen, but to anoint a dead body.

She could only ask, “Where have they taken Him?”  Thomas was not at the tomb. Nor was he present, after the Resurrection when Jesus first appeared to some of His disciples. So unbelieving Thomas, by nature one who believes only what he experiences, asks for proof.

Thomas states three conditions for belief: see the nail holes in Jesus’s hands, put fingers in them, and put a hand into the side of Jesus. Otherwise he will not believe. Scripture does not report that he demanded proof of some things that had already occurred. He did not want proof that nails were used and pounded into Jesus’s hands or proof that a spear was thrust into the side of Jesus. Therefore we can conclude that it is likely that he did see Jesus’s crucifixion and death, that he did actually experience these things, even if only from a distance.

Scripture does not tell us that Thomas was at the foot of the cross. But, since he only believes what he sees, it is possible that he was there. Perhaps he was at the bottom of the hill of Calvary. Perhaps he did hear and see the nails pounded into Jesus as well as the spear thrust into Jesus’s side.

When some of the disciples tell him they have seen the risen Lord, Thomas demands proof:  “Unless I see the nail marks in his hands and put my finger where the nails were, and put my hand into his side, I will not believe.” If indeed, as surmised, he saw Jesus’s crucifixion and death, that would explain his three explicit demands.

After Thomas tells his friends his conditions for belief, and considering all the possible things Jesus could have done to bring Thomas to Him (and also Mary Magdalene), it is interesting to realize that Jesus actually appears in the flesh to Thomas. Jesus could have made no response and let future happenings in the life of Thomas bring him back to belief. He could have had the other apostles and disciples question or shun Thomas and then have him respond to this by coming back to believe.  Or, Thomas, exercising his free will, could have rejected Jesus until he died. Of all the possibilities, Jesus chooses the one that seems most unlikely, but God’s ways are not our ways. And, as it turns out, what Jesus chooses to do is most effective.

The message for us is not “So, if I make a demand on Our Lord, He will appear to me – the Bible tells me so.” Most probably, considering the small number of people to whom He has appeared in all of human history, this will not happen. The scoffers will say “So, how’s that demand for Jesus to appear workin’ out for ya?”

The real message, real in terms of happiness for all eternity, is this: Jesus knew Thomas to his very core. Jesus loved Thomas. Of all the chosen people for all human history, Thomas was, to Jesus, one of the most special dozen men of all time. Jesus knew that if He appeared to Thomas and let Him experience Him risen, Thomas would believe. So Jesus does this. And for us the message is the same: Jesus knows what we need to believe and He will do all in His power, all the He has to do, to help each of us return to Him. This is happening right now for each of us.

Jesus did not force Thomas to do anything. And He will not force us to believe. But He will give us all we need, all the grace, all the care, all the love, to freely choose to be with Him. He will be present to us in everyone we encounter every day who also is made in His image. Jesus will say to us as He did to Thomas “Stop doubting and believe.” We will be free to say “My Lord and my God.”