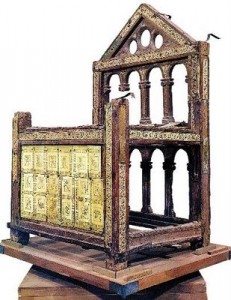 The election of Pope Francis was generally an occasion of joy around the world, especially for Catholics in Latin America. His call for simplicity and authenticity in living the Christian life has been received with enthusiasm. His intended mission as Holy Father seems to be to model Christian living in the 21st century. He urges us to simplify our lives and to focus on and imitate the Person of Jesus Christ. He challenges us to be open to the poor and the afflicted, to the estranged and the lost, while all the while focused on our final rendezvous with the Divine.

But no pope comes to us except out of the history of the Church, and this pope’s mission will substantially rest on the labors and the insights of his immediate predecessors, and the foundation which they laid for his endeavors as pope.

Blessed John Paul II came to the papacy with his own mission: To re-state and to clarify the teachings of the Catholic Church. He saw that the Truth, which the Church is duty bound to protect and to preach, had been hijacked by the relativists and the cultural accomodationists, both outside and inside of the Church, who sought to manufacture their own “truths” to fit their own personal agendas. Where there should have been clarity, there was purposeful ambiguity. Where there should have been a confidence and a sure knowledge imparted to the faithful, the faithful mostly received neither. Where there should have been the fullness of the truth, too frequently there were half-truths and deception. This was especially true at Catholic universities and colleges..

Beyond the academy, and more visible to ordinary Catholics, the theological and liturgical deconstructions of the bureaucrats at the diocesan chancery office, or even those of the local pastor or his “pastoral assistant” or “parish liturgist,” became too often the “official” teachings of the Church. The rock of the universal Magisterium was frequently reduced to the shifting sands of parochial manipulations. As the faithful painfully learned, truth conditioned by the so-called “Spirit of Vatican II” is a very flexible “truth” indeed.

It was in the face of this sorry state of affairs that John Paul II wrote and taught and preached. He clearly and cogently presented the Catholic view of the world and man’s role in it. He showed us that reason and faith are not opposed, but need each other. He eloquently explained the beauty and necessity of marriage, and articulated a theology of the body to a world looking for genuine love in all of the wrong places. In great detail and with absolute clarity he took aim at and destroyed the pseudo intellectual underpinnings of the moral relativism which had been smuggled into our midst masquerading as truth and dripping with sentimentality.

His promulgation of the Catechism of the Catholic Church was perhaps one of the most monumentally important acts of his papacy. We should not ever forget the shrill cries and self-serving protests of the relativists and the accomodationists that met the publication of the Catechism. After the Catechism, the jig was mostly up for the “Spirit of Vatican II” crowd that had so effectively used ambiguity and false representations to confuse and control the faithful to advance their agenda.

In short, Blessed John Paul II rescued both reason and faith, and taught Catholics how to think as Catholics.

During most of the papacy of John Paul II, Joseph Ratzinger was his principal advisor, and even as Benedict XVI he continued to bring clarity to Catholic thought, building on what Blessed John Paul II had accomplished. He has never ceased reminding the world of the compatibility of reason and faith, and the futility of the culture of death. However, Benedict had his own mission, and that was to do for the Sacred Liturgy what John Paul II had done for Catholic thought.

Benedict had written much on the Sacred Liturgy before his election to the chair of Peter. As pope he continued. During his entire papacy Benedict wrote and taught us about true worship of our God. He taught us the history of worship across the expanse of the Old Testament into the fullness of the New Covenant. With clarity and conviction, supported by Scripture and Church Tradition, he opened our minds to the meaning of authentic worship.

According to Benedict the Mass is not just a human affair. It is a meal, but a meal that is a sacrifice that accounts for our salvation. It is a social experience, but it is chiefly an encounter with the totally Other, whom we adore and praise. It is a cosmic event, with all creation directed to the Divine.

But because the omnipotent God is also a personal God, the Sacred Liturgy, he tells us, is also a communion with Jesus, who takes us up in the Holy Spirit to be with His Father, whom we are allowed to approach and to be taken in and welcomed by Him as His adopted children. The Mass is a true foretaste of the heavenly liturgy that never ceases in the sanctuary not made by human hands.

For Benedict the banalities and deconstructions of the post conciliar liturgical abuses are incompatible with authentic worship. He spent most of his life, and certainly his entire papacy, clearly and beautifully telling us what true worship is…and what it is not.

In short, Benedict XVI taught us how to worship as Catholics.

Francis has been pope for only a few months. But his words and actions communicate an intent to challenge us to release ourselves from our excessive entanglements with the material world, and to live a more authentic Christian life. In our postmodern world of radical individualism and nihilism, wrongly focused on the material and the perishable as the answer to man’s deepest questions, such a mission is neither irrelevant nor premature.

Because his mission of Christian authenticity requires the commitment and leadership of bishops, clergy, and religious, he is telling them to simplify their lives, and move out of the safety and comfort of their residences and chancery offices into the world to encounter the poor, both those with empty stomachs and those with empty hearts, to find the lost sheep and bring them back to the flock. He is speaking the words of St. Paul to Timothy: You are apostles, and not institutional managers. Preach the truth. Be faithful and courageous, in season and out of season. He is saying to them and to all of us: Be holy. Be faithful. Take up the cross. You are Jesus weeping for Lazarus and touching the leper. You are Jesus before Pilate and before the Jews in the synagogue at Capernaum. “Therefore, go and make disciples of all nations. Mt. 28:19”

As a final thought, many on the so-called Catholic left, and certainly the relativists and accomodationists among us, want to believe that Francis is repudiating the work of his immediate predecessors as intellectual clutter that needlessly complicated the Gospel message, and misdirected the mission of the Church from the streets and byways of a hurting world to the ivory towers of theological discussion. I saw a small example of this in a newspaper article about the 2013 World Youth Day.

The two reporters who wrote that article said that Pope Francis had reproached the hierarchy and clergy in Brazil for not speaking to the people in their country in direct and plain language with which the common person can comprehend the truths of the Faith with their minds and hearts. Then the writers went on to opine that the pope had taken a “direct swipe at the ‘intellectual message’ that so characterized the pontificate of his predecessor, Benedict XVI” (and presumably would have included the pontificate of John Paul II had they read his works). The implication was that John Paul and Benedict had neglected to speak effectively to the unwashed masses.

But that is both not correct and a misunderstanding of what is happening. Pope Francis has not repudiated the respective missions or communication styles of his immediate predecessors. Jesus not only taught in ways which the uneducated would comprehend, but also in ways which the priests and the educated class would understand (even as a boy of twelve in the temple!). And anyone familiar with the writings and preaching of John Paul II and Benedict XVI knows that both of them were able to communicate with the faithful, educated or uneducated. Certainly their own faith filled lives offered to the entire world the best communication of the demands and the glories of the Christian life. In short, the words, thoughts, and writings of Blessed John Paul II and Pope Emeritus Benedict XVI are not intellectual clutter or misdirection, but the welcome elucidation of the Truth of Jesus Christ as defended and preached to all mankind over the centuries.

We live as we think, and as we worship. If we are to go into a sinful world to live as Jesus we must think like Jesus and, above all, we must first worship, and enter into deep and prayerful communion with Him and His Father in the mysteries of the Sacred Liturgy. Pope Francis will be successful precisely because he has come to us after the pontificates of Blessed John Paul II and Benedict XVI.