Trending Now
You are at:Home»Featured»Three, Two, One…You’re On! How Voice Lessons Helped a Writer do Talk Radio
By Amy Bonaccorso on April 5, 2011 Featured, Tips, Tools, Tech 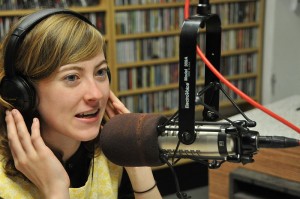 While an editor busily pruned my first book, I traveled to Washington DC’s Studio Theatre after work each week. How exhausting it was to schlep downtown on those nights, especially when it snowed!  After a 30-minute hike from the subway, I’d enter the classroom, lie down with my back touching the floor, begin breathing exercises alongside other students, and wait for my actress teacher to enter the room. This isn’t the normal writer’s routine and I was not in my element. But, I wanted voice training.

Writers don’t just write. We promote our work at podiums, over the radio, and on T.V. If you want to be a successful non-fiction writer in particular, you have to reach out to people who are interested in your topic and make yourself available. And that’s where voice comes in.

Most people hate the sound of their own voices. I personally had no confidence in my voice. But I knew radio shows were on the horizon and I wanted to gain an understanding of the natural instrument God gave me.

An old book about actor John Barrymore is what initially inspired me. Barrymore was a stage actor before he transitioned to the silver screen. He sometimes went off on retreats with a well-respected voice coach before a big play to get his voice in shape. It was then that I realized that voice training can be a special art on its own. I was intrigued to say the least and enrolled in a class myself.

Re-Learning to Breathe and Gender Differences

In class, one of the first things we learned was how to breathe. To project a strong voice, you need to breathe from your stomach rather than your upper chest. One exercise in particular was designed to correct bad breathing habits. We’d lie on our backs and breathe in deeply, and make sure our stomach rose rather than our chest as we inhaled. The teacher would count to ten as we inhaled to make sure we breathed in deeply enough. Then, we’d exhale. Eventually, we integrated our voice into each exhale for a deep, resonant sigh.

Voice training can be especially significant for women. Women tend to breathe from their chest. This is not natural. Babies and animals allow more oxygen into their bellies. A grown woman might breathe from her chest (perhaps unconsciously) because it results in a higher pitched, weaker voice, which may be experienced as more feminine. Or, she might want to fit into a treasured pair of jeans or skirt that is shrinking in the washing machine!

A man in our class was already breathing somewhat from his stomach, which helped create a fuller, louder voice. As I casually observed men, I saw that more of them were comfortable breathing from their stomachs than women. Another classmate pointed this out too. If you listen to female news anchors though, most of them have strong voices that fill a room. Some of them were born with those voices, and others had voice training along the way.

We learned several simple exercises to relax the body. Shaking our hands and feet was one, for example. If you carry tension, it will tighten up your vocal cords. I heard from actors and actresses that their voices raised to a higher pitch if they were nervous on stage. So, training their bodies to stay calm was an important aspect of delivering a riveting performance.

One easy way to get a better sound is to make sure your mouth is opening enough when you speak. We had a student who kept her lips very close together when she spoke, and it became the teacher’s mission to encourage her to open up.

You also want to make sure you are pronouncing your words correctly. Take the word “correctly.”  Do you drop the “t” at the end of the second syllable or actually try to softly pronounce it?  Tongue twisters can help you focus on your pronunciation and challenge you to be more cognizant of what you are actually saying.

The class I took went for a full semester and we learned quite a lot. Further, the teacher had practiced voice for so long that she readily identified specific challenges that each student had

It took some courage to take this class, because I initially felt out of place. I realized that although I was the only student who was not actively pursuing theater, I live some of my life on a stage too. I do a lot of book promotion, publicity, and also speak in front of others in the business world. In the end, the classroom experience wasn’t just about voice for me. I learned how much writers can grow professionally by learning from other types of artists. If we avail ourselves of the richness of other creative disciplines, we can move beyond the typical confines and limitations of writing, which can be a sedentary and lonely vocation.

Recently, I embarked on a lengthy radio campaign. If you ever hear me on the radio, know that I did 15 minutes of voice exercises before going live!  I don’t have a radio announcer voice, but am always trying to improve my speaking abilities for the benefit of listeners.