Trending Now
You are at:Home»Featured»Three Years after Summorum Pontificum
By Michael J. Miller on March 4, 2011 Featured 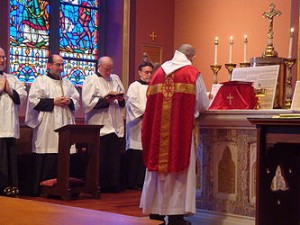 In his letter accompanying the 2007 Motu Proprio Summorum Pontificum, Pope Benedict XVI invited the bishops to report in three years on their experiences in implementing the new liturgical legislation, which is designed to make Mass celebrated according to the 1962 Missal more widely available.   Last fall the Pontifical Commission Ecclesia Dei began to review the feedback from diocesan bishops and also from lay associations that promote the traditional Latin Mass.

During an interview in December, the Secretary of the Ecclesia Dei Commission, Msgr. Guido Pozzo, noted that “a good third of the world’s bishops” had sent a progress report.  “The majority of these answers came from those dioceses in which a desire for the Mass in the Extraordinary Form exists. Thus, this return is very satisfactory.”

Generally, rediscovering the Church’s liturgical tradition is a low priority in countries that recently were missionary territory.  “At the moment, the greatest interest and the most requests are found in Europe, in the U.S.A., and also in Australia. Much less in Latin America, Africa and Asia….  In France, the number of believers attached to the old form of the Roman Rite is significantly higher than in Germany, Italy or Spain. It is also clear that a judgment about the worth of the Extraordinary Form of the Rite has nothing to do with numbers. The two Forms are equal in worth and honour.”

Since the Ecclesia Dei Commission supervises the application of the Motu Proprio, it is aware of the opposition to it in many diocesan chanceries.  “Certainly, there is still prejudice against and resistance to the Mass in the old rite,” whether for ideological reasons or because the demand for Mass in the old form is regarded as merely nostalgic or rigid and thus antithetical to the post-conciliar reform of the liturgy.  “Clearly, these prejudices—still widespread—must be confronted and overcome. We have to restore the unity of liturgical history.”

The present scarcity of priests who are trained to celebrate Mass in the Extraordinary Form is a major limiting factor.  Although the Motu Proprio itself says nothing about priestly education, Msgr. Pozzo expressed his opinion, “that seminarians should be offered the opportunity to learn to celebrate in the Extraordinary Form—not as a duty, but rather as a possibility.”  He also reminded those who are seeking a Traditional Latin Mass that priests of the Society of St. Pius X are still not in full communion with the pope.  “The Catholic faithful are urged to avoid participating in the Mass of a priest of SSPX, and receiving the sacraments from him, because they are canonically irregular.”

Every year since the promulgation of Summorum Pontificum, the International Federation Una Voce (FIUV), a lay association founded in 1967 which promotes the use of Latin in the liturgy, has filed a report with the Holy See based on data and comments from its members worldwide.  A redacted copy of their third-year report was posted at their website in December 2010.  It begins with a letter to the Holy Father in which Executive President Leo Darroch expresses the FIUV members’ “profoundest sentiments of filial piety, loyalty and thanksgiving” and assures him of their prayers.

The section entitled “Opening Comments” recalls that the FIUV was always aware that the traditional Latin Mass had not been abolished and has strived to be faithful to the full liturgical teachings of the Second Vatican Council.  It cites several passages from the conciliar document on the liturgy, Sacrosanctum Concilium.  “For more than forty years it has been taboo to discuss any aspect of liturgical reform as though it were to be seen as a sign of disloyalty to Popes John XXIII and Paul VI, as an act of disobedience to the Council….  Pope Benedict XVI, by his courageous action in promulgating this motu proprio, has generated a debate at all levels in the Church.”  As the Holy Father wrote in his letter on Summorum Pontificum, “It is a matter of coming to an interior reconciliation in the heart of the Church.”  According to the FIUV report, however, this opportunity for healing “is being squandered by a deliberate and coordinated strategy of disobedience”.

Although the local reports that name names are kept confidential, the FIUV notes that “there are many bishops who are denying the authority of the Supreme Legislator and are placing their own negative and restrictive interpretations on the motu proprio.”  Many ordinaries have used various means “to obstruct the reasonable and legitimate requests from their flocks for the traditional Mass.”  For example, one bishop required that priests who wanted to celebrate Mass in the Extraordinary Form pass an “examination”, although there was no similar language examination for foreign priests to celebrate the new vernacular Mass in his diocese.  “Instructions have been issued that make [the bishops’]displeasure at the traditional Mass perfectly clear to their priests, thus creating a climate of fear…. What would ‘Good Pope John’ make of bishops who so intensely dislike the Missal he published in 1962?”

The FIUV criticism of the bishops’ lack of compliance with Summorum Pontificum is oblique but severe.  This section of the report concludes by quoting, with overwhelming effect, the hymn “Ubi caritas et amor” (“Where charity and love prevail”), which is traditionally sung on Holy Thursday to commemorate the institution of the Holy Eucharist.

There is good news in the Una Voce report.   “In Australia, the traditional Mass is spreading from the larger cities to the regions.”  With the active support of Cardinal Pell and four archbishops, “many more traditional Masses have been celebrated in various new places.”  One Conventual Franciscan priest travels hundreds of miles across six dioceses to help keep up with the demand for the traditional Mass.

“Some slight improvement” is noted in England and Wales (where two archbishops and four bishops have been “reasonably accommodating”), Norway, Peru, Poland, Russia, and the U.S.A., largely due to the efforts of the laity.  In the United States,  Cardinal George, four archbishops (including Raymond Burke, who now works in the Roman Curia and was recently made a cardinal), twenty bishops and two auxiliary bishops are described as having been “very helpful” to the cause.

“Una Voce America works in conjunction with the Priestly Fraternity of St. Peter, and training is given to diocesan priests at the FSSP seminary at Denton, Nebraska. This is a prime example of the bishops, clergy and laity working together in the spirit of Summorum Pontificum to train priests… a model that should be adopted by episcopal conferences everywhere.”  In France, courses on the prayers and rubrics of Mass in the Extraordinary Form take place mainly in monasteries and are attended by young priests.

Again from the lay perspective, the Three-Year Report from Una Voce describes the traditional Mass as a great source of sanctification which gave generations of Catholics a “sense of belonging… of being at home in a universal Church”.  An additional feature in the current report is an appendix presenting the results of recent scientific surveys of Catholics in four Western European countries.  Question #4 read, “If Mass were celebrated with Latin and Gregorian chant in its extraordinary form in your parish, without taking the place of the ordinary one in the vernacular, would you attend it?”  A surprising number of practicing Catholics who were polled answered yes:  in Great Britain 26%, in Germany 44%, in Portugal 53%, in Italy 63%.

Traditional Catholic websites observed the third anniversary of Summorum Pontificum with news about progress in unexpected places.  The Most Rev. Pascal N’Koué, Bishop of Natitingou, Benin (Africa), published his report to the Holy See in the diocesan newspaper, Vie diocésaine de Natitingou in June of 2010.  Long convinced that the two forms of the Roman Rite “can coexist peacefully and enrich each other”, Bishop N’Koué introduced the Extraordinary Form in his diocese in October 2003, even before the Motu Proprio.  He attributes conflicts over the liturgy to “our sick and intoxicated hearts, or our narrow-minded ideologies, and our formation courses which are too set in their ways”.  He regards “celebration in the old form is an opportunity for my young clergy and the entire diocese….  Several of my priests, without any pressure from me, have spontaneously begun to learn to celebrate the Mass of St. Pius V, or more exactly the Mass of Pope John XXIII…. The Roman Canon and the liturgical gestures in the old rite are closer to our African religiosity and sensibility.”  In the same issue of the newspaper, the bishop commented on what the Ordinary Form of Mass can learn from the Extraordinary Form.  “Give a little more room to Latin in our celebrations….  In our liturgies let us avoid the din of musical instruments, the banality of lyrics and the shallowness of excessively profane rhythms.”

Although only two or three diocesan priests in the Netherlands were able to celebrate the traditional Latin Mass in 2007, when Summorum Pontificum was published, now around thirty priests can celebrate that liturgy or are learning it, despite strong resistance from other clergy and many lay people.  Training courses for priests and seminarians are offered at the seminary of the Diocese of Haarlem-Amsterdam.  Since December 2010 the “classical” form of the Roman Rite has been celebrated regularly in that seminary community.  In the Dutch Diocese of ’s-Hertogenbosch, seminary professor Fr. Gero P. Weishaupt celebrates a “private” Mass in the Extraordinary Form once a week, in which seminarians participate.

In a wide-ranging interview published in December, Fr. Hendrik Jolie, pastor of St. Michael’s Church in Nieder-Ramstadt, near Darmstadt (Germany), made many incisive remarks about the traditional Mass.  “The priesthood and the Sacrifice of the Mass go together…. How are you going to represent Christ’s obedience ritually when at the same time you are always putting on your own narcissistic productions by trying out new antics?  Now the pope has rehabilitated the ‘Old Rite’, and in my experience this rite is an excellent school of obedience….  I did not know this rite from my childhood, but I must tell you:  After I had learned it and celebrated my ‘First Mass’ in the Extraordinary Form of the Roman Rite, I felt that I had come back home….  People from my congregation who have no liturgical education at all—and therefore have no way of knowing that the pre-conciliar rite is supposed to be ‘bad’—now speak quite uncritically about the old rite as ‘the real Mass’….  Some people may think I’m crazy, but I am firmly convinced that the Old Mass is necessary if the Church is to get well again.”

Michael J. Miller is on the Advisory Council of the Philadelphia Chapter of the Latin Liturgy Association
Originally published in Catholic World Report and used by permssion of the author.