Trending Now
You are at:Home»Featured»Through, With, and In Him
By Shane Kapler on April 5, 2014 Featured, On Books 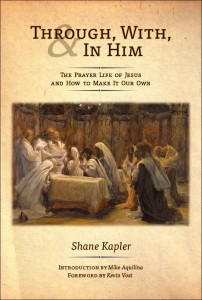 Editor’s Note: Looking for a way to deepen your prayer this Lent and Easter? ShaneKapler’s Through, With, & In Him shows readers how the Church’s sacraments, liturgy, and private devotions unite them to the prayer continually issuing from the heart of Christ. Here is a first look, compliments of Angelico Press:

As [Jesus] was praying, the appearance of his countenance was altered, and his clothing became dazzling white. And behold, two men talked with him, Moses and Elijah, who appeared in glory and spoke of his exodus, which he was to accomplish at Jerusalem. ~Luke 9:29–31

Put yourself in the shoes of Peter, James, and John for a moment. Jesus invited them to come away and pray with him. They had seen him pray many times, even prayed with him; they thought they knew what they were getting into, and then…this! Their eyes were opened to what happened in the spiritual realm when God the Son prayed. They saw Divine Light coursing through his humanity. They witnessed him listening to the Father as He addressed Jesus through Moses and Elijah, representing Israel’s Law and prophets; and they heard Jesus respond in turn. And then within a matter of moments it was over, everything back to normal. Jesus stood before them alone, the same thirty-something man they had spent the past year with, wandering around Galilee and Judea. I wonder, though—did they brace themselves the next time Jesus began to pray? I know I would have; God the Son’s prayer can be overwhelming, to say the least!

So imagine my shock when I read these words from Cardinal Joseph Ratzinger (later, Pope Benedict XVI): “Since the center of the person of Jesus is prayer, it is essential to participate in his prayer if we are to know and understand him.”[1] The first part of his statement is easy enough to understand: Jesus is the Son of the Father. That is his deepest identity, from all of eternity. When he became a man he expressed his dependence on and love of the Father through communal and private prayer. He worshiped in the Temple and synagogue and communicated with the Father privately day and night. But how are we supposed to participate, take part, in his prayer? We’re not there with him in the Temple or on the Mount of Transfiguration the way the Apostles were!

This is where our Catholic Faith comes to the rescue. It teaches that in baptism we were made members of a great mystical body of which Jesus is the head (1 Cor. 12:12–13; Eph. 4:15). Jesus is living his life within us, and so when we pray, “he prays in us, and with us.”[2] To grow in intimacy with Jesus and share his prayer, his relationship with the Father, it is not necessary to travel back in time to the Transfiguration. The Church’s liturgy and devotions can insert us, living right here and now, into Jesus’s life of prayer. All we need to do is reach out and start using the rich treasury of prayer existing all around us as Catholics.

I know that is a bold claim. I could not have imagined making it twenty-six years ago, when I started my faith journey. I was a middle school student in a Catholic school who felt he “got nothing out of” going to Mass or reciting the prayers he had memorized for religion class, when an intense personal encounter with God—a transfiguration moment, you might say—turned my world upside down. I was hungry to know more of him and, because I had never encountered him through Catholic ritual or rote prayer, decided those were not of value. When a family friend invited me to her non-denominational (charismatic) church, I saw spontaneous, emotional prayer; and it seemed so much more authentic than the prayer I had grown up with. My mother and I started attending Tuesday night services, and I was well on my way to severing all ties with the Catholic Church if not for two things—an experience at Mass and then meeting a Catholic youth minister.

That Mass was nothing out of the ordinary; at least, it was not up until the point when I received Jesus in Communion. As I knelt in prayer I was absolutely overwhelmed by God’s presence within me. It was completely unexpected and personally undeniable. I was taken aback by the implication—Jesus gave himself to me through the ritual of the Mass. Perhaps there was more to those traditional Catholic prayers than I had thought.

Soon after that experience, my path crossed that of a dynamic Catholic youth minister who invited me to visit a newly formed prayer group for teens. The group brought all of the exuberance and prayerful spontaneity of the non-denominational church to its weekly meetings, but fused this with a monthly celebration of the Eucharist and retreats where we learned about the power of the sacrament of reconciliation, the Rosary, and praying the Liturgy of the Hours. We heard stories of the saints and the ways they prayed. I was able to look at the group’s adult leaders and see the effects these traditional forms of prayer had on them and, in some cases, experienced them for myself.

The prayers of the Church and of her saints, rather than stifling my ability to express myself to God, enlarged it. I slowly came to see how the spontaneous, “authentic” prayers I offered at the beginning of my faith journey were those of a youngster—heartfelt and sincere but focused on my life and the small circle of lives touching mine. It was limited by my lack of knowledge regarding both the deepest needs and movements of the human heart and how prayer could be more than thought and words. The prayers of the Church are those of an adult with 2,000 years of spiritual depth and know-how. When I listened to her pray, especially at Mass, I was called out of myself, called to pray for and with the whole body of Christ—on earth, in purgatory, and in heaven! I was called to pray, fast, and do penance both for my sins and for my brothers’ and sisters’ sins. Left to myself I don’t know how I ever could have arrived at the realization that all of our daily activities, even suffering, can be transformed into prayer!

Studying the gospels and the religious life of Jewish people in first-century Palestine convinces me that the Church did not arrive at the content or manner of her prayer lightly. I found the same concerns and practices in the prayer of Jesus himself! The Church’s rich spiritual life is the work of the same Holy Spirit through which Jesus poured himself out in prayer to the Father.

In the pages that follow we will use Scripture and history to explore Jesus’s prayer and recognize how Catholic liturgy, sacraments, devotions, and practices allow us not only to mirror his prayer, but to enter into it. We want to give ourselves to the Father, in the Holy Spirit, in union with Jesus. We will begin with his Incarnation and the prayers of his Jewish boyhood and move progressively forward to his Passion and the priesthood he now exercises in heaven. Chapters begin by exploring Jesus’s prayer at a certain period in his life and then reflect upon which sacraments, elements of the Mass, and devotional practices make present those facets of Jesus’s prayer. I then provide suggestions for how you can integrate these Catholic treasures into your spiritual life. The final chapters of the book are devoted to what I have come to view as the two greatest means, outside of the Eucharist, for bringing our prayer and lives into profound union with Jesus’s—devotion to his Sacred Heart and Blessed Mother. I hope that reading this book will lead to a transfiguration moment in your own life, allowing you to see our centuries-old prayers and devotions for the spiritual livewires they are, and in doing so to be better equipped to fulfill the command to “[r]ejoice always; pray constantly; give thanks in all circumstances; for this is the will of God in Christ Jesus for you” (1 Thess. 5:16–18).

[1] Joseph Ratzinger, Behold the Pierced One: An Approach to a Spiritual Christology (Ignatius Press: San Francisco, 1986), 25.

Through, With, and In Him is available from the author’s website