Trending Now
You are at:Home»Featured»Transhumanism: Taking the Place of Our Creator
By Rebecca Taylor on October 15, 2015 Featured, Science, Transhumanism 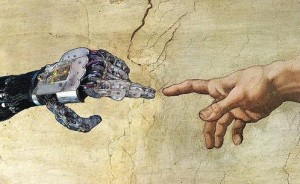 There is a dangerous philosophy emerging in our fast-paced, technology-driven world of which most people are totally unaware. And yet, when Francis Fukuyama, economist at the Johns Hopkins School of Advanced International Studies, was asked what idea posed the “greatest threat to the welfare of humanity,” his answer was this philosophy.

And yet I am positive most Catholics have never heard of it. Catholics certainly do not realize that they are being fed a steady diet of images in popular media that play right to the more seductive aspects of this ideology.

What is it? It is transhumanism. “What is that?” you ask. Transhumanism is a philosophy that seeks to use technology to surpass treating or preventing disease and use it to enhance otherwise healthy humans beyond natural capabilities.

Transhumanism sees technology as a way to direct the evolution of humanity into something other than human: the “transhuman” meaning “beyond” human.

To the transhumanist, medical advances like drugs, artificial limbs and genetic engineering are tools, not just to heal the sick and injured, but to create a technological utopia where you can be “beyond” human.

Transhumanists envision a world where you can leave your ignorant, weak existence behind and enhance your way to being supersmart, superstrong, superhappy, basically superhuman. They desire to replace perfectly healthy eyes and limbs with artificial ones or genetically modify themselves or their offspring to be unnaturally strong with unheard-of IQs or merge their minds with artificial intelligence.

Their goal is to create a new species of “post-humans,” where human limitations, including death, are a thing of the past.

Ray Kurzweil, in his book The Singularity Is Near, widely accepted as a pivotal book in transhumanist ideology, predicts we will become so intimate with our technology that we will not be content to simply use cellphones and computers. We will integrate technology into our already healthy bodies.

Kurzweil describes the human-body version 2.0 that will be mostly “non-biological,” where nanobots replace our heart, lungs, nervous and digestive systems. The enhanced human 2.0 could run an “Olympic sprint for 15 minutes without taking a breath,” eat anything and never get fat, have superintelligence and create any virtual reality, including a virtual lover, inside the nervous system at will. And most importantly to Kurzweil, the human 2.0 will never die.

It all sounds like kooky science fiction that is easily dismissed, and yet transhumanists have technical journals, magazines, societies and even international conferences.

Kurzweil, an expert in predicting future trends in technology, insists that because of the exponential progress of this technology, these enhancements are maybe only decades away. He estimates that human intelligence will be able to merge with computers as early as 2030.

The promises of transhumanism are very seductive. Who would not want to be superintelligent, superstrong and live forever? And, frankly, whether we know it or not, we are increasingly surrounded by transhumanist images. Some of our favorite characters in fiction are transhumanist.

Take Captain America. Captain America is the perfect, palatable and patriotic example of transhumanism. Captain America’s enhancements were a choice. Other superheroes are tragic figures born of accident or genetic lottery. But in this transhumanist tale, everyday American Steve Rogers was experimented on to make a better soldier to help win a war.

He was weak and small, but healthy, and underwent potentially fatal procedures to make him a superhero.

Even Disney has gotten on the transhumanist bandwagon. The Disney Channel has a show called Lab Rats. Three of the main characters are teenagers who were genetically engineered by a billionaire investor to “save the world.” One has been altered to have superintelligence. Another has been enhanced with superspeed and agility. And the third was modified to be superstrong.

With the resurgence of Captain America and TV shows like Lab Rats, we are now seeing heroes made by intentional enhancements performed by scientists. These transhumanist depictions of human augmentations are planting the seed that, as long as the intentions are noble, it is morally acceptable to take your otherwise healthy body and modify it to become superhuman.

In Discover Magazine, transhumanist Kyle Munkittrick laid out his “Seven Conditions for Attaining Transhumanism.” One condition is we leave the traditional ideas about humanity behind and reject being biologically human as a prerequisite for personhood. Munkittrick writes, “When African grey parrots, gorillas and dolphins have the same rights as a human toddler, a transhuman-friendly rights system will be in place.”

Another notable pitfall is that human augmentation will likely result in a world where the enhanced superhumans will rule over the un-enhanced. Those who can afford or have access to enhancements will be the elite, and those who do not or cannot be enhanced will be second-class citizens, especially in the transhumanist world, where personhood and rights are based on everything but natural biology.

Political scientist Francis Fukuyama, when discussing transhumanism as his answer to the greatest threat to humanity, believes the “first victim of transhumanism might be equality.”

Transhumanists often insist that a core value of transhumanism is freedom: freedom to choose to do to our bodies what we want. But, in reality, those who are un-enhanced will be coerced into enhancements just to keep up with the elites, a fact that even they will hint at. Kurzweil admits un-enhanced humans will be a rarity because the un-enhanced will be “unable to think fast enough to keep up.”

If these elitist ideas of using science to take the evolution of humanity into our own hands to create a “better human” sound familiar, they should. Transhumanism has its roots in the eugenics movement — the very philosophy that inspired the Holocaust in Germany.

The term “transhumanism” is attributed to Julian Huxley, president of the British Eugenics Society from 1959-1962 and brother of the famous novelist Aldous Huxley. In his 1957 piece “Transhumanism,” Huxley wrote that the human species can “transcend itself” and that when we embrace transhumanism “the human species will be on the threshold of a new kind of existence, as different from ours as ours is from that of Pekin man.”

Even the logo of the Second International Congress of Eugenics proudly proclaimed, “Eugenics is the self-direction of human evolution.”

I don’t believe modern transhumanists have any idea where their ideology originated, but it is still instructive toward what will lie ahead if their technological dreams come to pass. We have tried transhumanism already, only it was called eugenics then. Eugenics, in its attempt to control the direction of human evolution, did create a world where the lesser humans were second-class citizens whose rights were forfeitted to the “greater good” determined by the elite.

The Catholic Church is very aware of the social disparity between using technologies like genetic engineering to heal and using them to enhance humanity beyond what can be accomplished by nature. The Church embraces advances like genetic engineering for therapeutic purposes but rejects the use of such technologies to take otherwise healthy people and transform them into superhumans.

In regard to genetic engineering for enhancement purposes, the Congregation for the Doctrine of the Faith’s 2008 instruction Dignitas Personae states that “such manipulation would promote a eugenic mentality and would lead to indirect social stigma with regard to people who lack certain qualities,” which “would be in contrast with the fundamental truth of the equality of all human beings” and “would harm peaceful coexistence among individuals.”

More importantly, Dignitas Personae warns “that in the attempt to create a new type of human being one can recognize an ideological element in which man tries to take the place of his Creator.”

So what can we do to resist transhumanism? First, we must not fall into the typical transhumanist trap. The transhumanists always present the scenario that in accepting medical progress for treating disease or disability one must also accept technology to enhance man beyond what can be accomplished by nature. They argue that rejecting enhancement means taking away Grandma’s new hip and Grandpa’s defibrillator and only the angry, hate-filled Luddites of the world would want that.

In reality, it is not all or nothing. We can make the decision to limit such technology for therapeutic uses only. Grandma can have her hip replacement and Grandpa can have his defibrillator without embracing a world where every human, not just ones in a deadly accident, has to become the Six-Million-Dollar Man.

Second, we can recognize transhumanist ideas and discuss them, especially with our children. Whether parents realize it or not, transhumansim is in the consciousness of our children. My own son once asked me why I don’t like human enhancements. He was distressed and asked, “Then how can I become a superhero?” My husband commented that he wanted to be a superhero too when he was 9 and that every boy in the world wants to be a superhero.

My son’s generation may actually be able to fulfill those childhood dreams of becoming enhanced. The problem with childhood fantasies is that children often cannot see the possible devastating effects of invasive procedures on their otherwise healthy bodies or the effects of enhancements on society as a whole.

I fear without bringing transhumanism out of the shadows and into the light for scrutiny that an entire generation may not be equipped with enough insight to resist the overwhelming pressure to enhance simply because everyone else is doing it. We all need to be reminded that we are made in God’s image and likeness and to enhance ourselves into the immortal transhuman means we are taking the place of our Creator.