Trending Now
You are at:Home»Featured»Twelve Other Forms of Marian Piety
By Fr. Edward Looney on May 21, 2015 Featured, Live in Christ 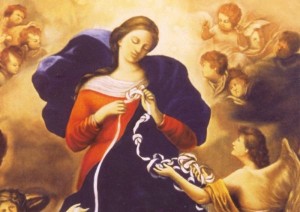 In my last article, I looked to the rosary as the Marian devotion par excellence.  Some people may find the rosary difficult to pray, or they desire to honor Mary in another way or additional ways.  Below are twelve other ways in which a person can honor Mary beside the rosary.  By no means should this list be considered exhaustive.

Catholics have had a long tradition of sanctifying the day through prayer.   In years gone past, and at some churches still today, church bells toll at six, noon, and six, encouraging those in ear shot to nod their head in prayer.  They pray the Angelus during the seasons of Advent, Christmas, Lent, and Ordinary Time; and the Regina Caeli during the Easter Season.

These two beautiful prayers encourage us to call to mind the incarnation and heavenly realities during our day to day work.  Also, you do not have to pray them as six, noon, and six.  If it is difficult for you to do so, consider praying the Angelus or Regina Caeli at meal times.

This seems rather simple, right? Oftentimes when a special intention comes up, a person might pray the Hail Mary. There are devotions where people pray a specific number of Hail Marys for a particular intention.

For one reason or another, it seems that the devotion of praying three Hail Marys is quite popular!

With Pope Francis’ election, it has been touted that his favorite Marian devotion is to Our Lady, Undoer of Knots. The devotion was inspired by St. Irenaeus who said, “Eve, by her disobedience, tied the knot of disgrace for the human race; whereas Mary, by her obedience, undid it.”

Today people have many knots in their life, be it finances or family problems.  The devotion asks Mary to untie these knots. There is a little novena booklet to Our Lady, Undoer of Knots.  It is available online here.  Or you can buy the novena booklet

While praying the litany, one of Mary’s many titles maybe become a favorite, helping to foster a devotion to Mary under that title.

Catholics like to pray novenas leading up to a liturgical feast. One could pray a novena in anticipation of the Assumption, Nativity of Mary, or the Immaculate Conception, among others.

The Church has provided us with “A Collection of Marian Masses.” This collection contains special Masses that could be celebrated in honor of Our Lady’s many titles and roles.

The prayers and readings are contained in a special Missal and Lectionary. Located in the back of the lectionary are a listing of all the readings by book, chapter, and verses. The list is available here.

All the readings have some sort of Marian connotation.  Someone could take these passages and reflect on them one by one through Marian lectio. I have found thatlectio divina is a real, personal, and relational way of praying with scripture. Much insight about Mary and one’s own life can be gleaned from praying with Marian scripture passages.

I spent eight weeks in Guatemala during the summer of 2012. I resided at a Benedictine monastery in a city called Quetzaltenango. The priory at the time operated a high school seminary. Some students lived in a separate dormitory while others commuted to the school.

Every so often I would join the students for their daily Marian devotions. Some days they prayed the rosary, while on other days they sang hymns to Mary.

The most popular form of this devotion occurs during the vigil of Our Lady of Guadalupe in the form of Las Mañanitas. There are many songs that can be sung in honor of Mary. For example, the Church provides us with seasonal antiphons (e.g. Alma Redemptoris, Ave Regina Caelorum, etc.) that are sung at the close of Compline each night.  And what’s to stop a person or group from singing the many Marian songs of the tradition (e.g. Immaculate Mary, On this Day, Mother Fairest, etc).

Singing songs to Mary, that is serenading the Madonna, is another form of Marian devotion.

8.  Other Traditional Marian Prayers and Devotions

There are other traditional Marian prayers that people may be familiar with. The Memorare and the Sub Tuum Praesidium come to mind. To learn these prayers, go here.

There are other devotions to Mary under different titles. These include the Immaculate Heart, Sorrowful Heart, Our Lady of Perpetual Help, Our Lady of Good Success, among many others. Some of these devotions are inspired by private revelation, so one should have recourse to the proper ecclesiastical authority.

No matter where you live, I am sure there is a Marian shrine in the surrounding area. Typically these are devotional shrines to Mary under various titles and have become places of prayer and pilgrimage.

In the Midwest I can name several: the National Basilica of Our Lady Help of Christians (Holy Hill), Shrine of Our Lady of Guadalupe (LaCrosse), Basilica of the Seven Sorrows (Chicago), etc.  In rare cases, like the Diocese of Green Bay, there is a shrine (Our Lady of Good Help) honoring an approved apparition of Mary.

There are many basilicas and shrines to Our Lady throughout the nation. Find out if there is a place of Marian pilgrimage in your area and offer a prayer to the Madonna.

John Paul II was known for his Marian devotion. At the conclusion of each encyclical, John Paul II invoked the intercession of the Blessed Virgin Mary in the form of a prayer. One could compile these prayers from the encyclicals and pray with them in a lectio divina style. Here are a few miscellaneous Marian prayers of John Paul II. Some may find the following book helpful:  John Paul II: A Marian Treasury.

My Queen, my Mother, I give myself entirely to you, and to show my devotion to you I consecrate to you this day my eyes, my ears, my mouth, my heart, my whole body without reserve. Wherefore, good Mother, as I am your own, keep me and guard me as your property and possession. Amen.

In addition to morning consecrations, there are other short Marian consecratory prayers of the saints or from private revelation.

Marian consecration has gained tremendous popularity in recent years. The surge of interest can be attributed to the Marian devotion of Blessed John Paul II. Fr. Michael Gaitley, MIC, has written a very accessible, down to earth, Marian consecration entitled 33 Days to Morning Glory. Many parishes are implementing programs to facilitate conversation and community among those preparing to consecrate themselves to Jesus through Mary using Gaitley’s book.

The most popular form of Marian consecration was promoted by St. Louis de Montfort in his book True Devotion to Mary.  There are many other consecrations including the Militia Immaculata consecration and the Total Consecration to Jesus Through Mary for Families promoted by the Familyland Apostolate.

There are many ways to honor Mary besides the rosary. While the rosary does have pride of place as a Marian devotion, I hope that these twelve other Marian devotions may be helpful to your spiritual life. Maybe there are some you never even thought of.

We are beloved sons and daughters of God, and we have a mother in Mary and the Church. As loyal sons and daughters, let us strive to honor her in many ways. We can do this through many different Marian devotions, and for some, it might be as simple as bringing flowers to a statue of Mary, whether it is at your parish, in your home, or at a Marian shrine.

During the month of May, let Mamma Mary know you love her!