Two anniversaries are coming up, one that inspires, one that reveals the depths of human depravity.

Michael Clancy, a photojournalist, has spoken at National Right to Life Conventions, been interviewed by yours truly, and had [has]a story that fairly rippled through our collective conscience.

You remember him, I’m sure, for the “Hand of Hope.” It’s been nearly fifteen years since Clancy took his memorable photo of Samuel Armas’ tiny hand, grasping a surgeon’s finger during in utero surgery, a photo that traveled around the globe, stunning a world that had tried to hide its face from the reality of life in the womb.

“Baby Samuel” had been diagnosed with spina bifida and hydrocephalus, which occur when the spinal column fails to fuse properly, leaving a lesion (or opening) that is highly susceptible to infection. A team of surgeons at Vanderbilt University were operating to close the lesion. When he took the photo in 1999, Clancy was a freelance photographer filming the fetal surgery procedure for USA Today.

After the incision was made in mother Julie Armas’s abdomen, her uterus was removed and laid on her thighs. An opening was made in the uterus, and the surgeons were supposed to operate on Samuel without any part of his body emerging from inside.

However, as Clancy eloquently describes, “Out of the corner of my eye I saw the uterus shake, but no one’s hands were near it. It was shaking from within. Suddenly, an entire arm thrust out of the opening, then pulled back until just a little hand was showing. 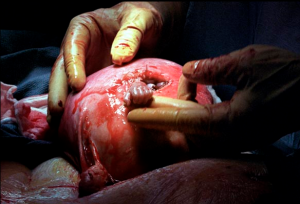 “The doctor reached over and lifted the hand, which reacted and squeezed the doctor’s finger. As if testing for strength, the doctor shook the tiny fist. Samuel held firm. I took the picture! Wow! It happened so fast that the nurse standing next to me asked, ‘What happened?’ ‘The child reached out,’ I said. ‘Oh. They do that all the time,’ she responded.”

The amazing photograph of Samuel reaching out to his doctor appeared in USA Today and The Tennessean September 7, 1999. Although Clancy never sought notoriety, his work immediately caught the attention of the media and of people around the world.

A self-professed “pro-choicer” prior to taking the “Hand of Hope” photo, Clancy did a 180. [Tip of the hat to lifenews.com.]

That’s the uplifting anniversary. But there’s another, much grimmer one-year anniversary. On May 13, abortionist/murderer Kermit Gosnell was convicted of three counts of 1st degree murder and one count of involuntary manslaughter.

Two days later he was sentenced to three life sentences for the deaths of viable babies he had deliberately aborted alive (for his own unfathomable reasons) and then slit their spinal cords, plus 3 ½ more years for the death of 41-year-old Karnamaya Mongar.

In a bizarre coda, seven months later, in December, Gosnell was sentenced to 30 more years for running what prosecutors called a “pill mill.” For those who did not follow the case closely, authorities did not find out about his “House of Horrors” until they raided his Women’s Medical Society abortion clinic, looking for evidence he was writing bogus prescriptions for thousands of OxyContin, Percocet , and Xanax pills.

Gosnell made a fortune writing these scripts. He made an even larger fortune performing late, late abortions almost entirely on women of color.

Yet there is a ray of light on this dark episode. As we’re reported, the husband-and-wife filmmaking team of Phelim McAleer and Ann McElhinney has been busy raising money to tell the story the “mainstream media” chose to ignore.

Their goal was $2,100,000. If you go to their site, www.gosnellmovie.com, you see that as of last week they had surpassed the total!

The “Hand of Hope” and the “House of Horrors”—about as far apart as the east is from the west.