Trending Now
You are at:Home»The Catholic Family»Dating & Singles»Two Takes on Chastity
By Patrice Fagnant-MacArthur on May 18, 2015 Dating & Singles, Featured, On Books 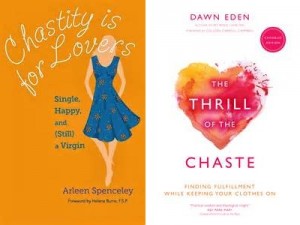 Ave Maria Press recently published two books on chastity. While the books come to the same conclusions, the authors do so from very different viewpoints. The first, Chastity is for Lovers: Single, Happy, and (Still) a Virgin, by Arleen Spenceley, is by a twenty-nine year old woman who is still looking for Mr. Right. She has high standards, refuses to lower them, believes that God has a plan for her (which may or may not include marriage), understands that true love is hard and involves sacrifice, and says that she is not “saving herself for marriage,” because “only Christ can save us.” Rather, she believes that she is “saving sex” by “redeeming it. By God’s grace, I have chosen to resist the damaging cultural trends that trivialize the purpose of human sexuality. I refuse to use or regard the human body in any way that doesn’t revere its dignity or sanctity. In marriage, sex is a gift of the totality of oneself to another person.”

Spenceley is an idealist. She has a healthy dose of self-confidence and is happy with her life, while acknowledging that it is sometimes difficult to still be single. She is not judgmental and is very clear that those who have had premarital sex should not be condemned or considered less worthy than those who have waited, instead encouraging the use of the sacraments to provide individuals with the opportunity to be forgiven and start over. She should be given a great deal of credit for being willing to go public with such a counter-cultural lifestyle. That in itself takes a great deal of courage. Her book would be great for reading and discussing in a teen youth group. It is probably best for those who are still virgins to encourage them to continue on that route.

For those who have a different background, have experienced abuse of any type, or have struggled with chastity, The Thrill of the Chaste: Finding Fulfillment While Keeping Your Clothes On by Dawn Eden is the book to read and recommend. This new edition is a rewrite of a book she originally penned in 2006. She was then in her mid-thirties, a Jewish convert to Protestant Christianity, taking RCIA classes to become Catholic. Today, she is Catholic, finishing up a pontifical doctorate in theology, and has made a personal consecration of celibacy to the Sacred Heart of Jesus through the Immaculate Heart of Mary.

Eden was sexually abused as a child. She was raised in a liberal household by divorced parents. She had no desire to wait until marriage for sex, but did want to wait to be “’in love’ – whatever that meant.” Yet, over time she learned to disassociate sex from love and bought into the casual sex mentality.

Once she made the decision to convert to Christianity, she determined to start living a chaste life. It definitely wasn’t easy. She shares her struggles, and goes on to explain why the struggles are worth it. Once she became Catholic and experienced the sacrament of Reconciliation, she began to discover that lust wasn’t necessarily her root sin. “The real problem might not be lust so much as envy (‘the woman who has him doesn’t deserve him’), pride (‘I deserve him’), or resentment (‘how dare he not notice me’). It could even be a sin against the Love Commandment: failing to love God enough to trust that he has a plan for me.”

Eden is a wise guide who can speak from experience on how the road of sin brings no fulfillment. She knows that most people who seek solace in sex are actually seeking love. She knows sex should not be separated from married love. “In a truly loving relationship, both the man and the woman love God, and so they become God’s love to each other.” But even married love will never be perfect. “We are not meant to be fully satisfied on this earth.” She encourages readers to “make friends with that sense of longing.”