Trending Now
You are at:Home»Featured»Ukraine: Bishop Denounces Violence Against Protestors
By ACN-USA News on January 29, 2014 Featured, International Issues, Those in Need 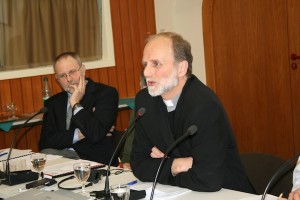 According to a local bishop, the “brutal” crackdown on demonstrators in Ukraine is acting as a recruitment agent for the protest movement. “It is hard to imagine a more prayerful [protest]in 21st century Europe,” says Bishop Gudziak,describing the country as being engaged “in a battle for dignity.”

Bishop Borys Gudziak, Eparch of the Ukrainian Greek Catholic Eparchy of Paris, defended protestors on the streets under fire by government forces and repeatedly called that they not take up arms.

“It is hard to imagine a more prayerful manifestation in 21st century Europe.”

In an interview with Aid to the Church in Need (ACN), the Catholic charity which for decades has supported the Ukrainian Greek Catholic Church, Bishop Gudziak spoke out against the violent security response to the demonstrations, describing protestors as prayerful and non-violent people. “The people are not out on the streets to campaign for a party or candidate – they are gathering around principles. The country in somewhat traumatic ways is trying to break the bonds of the past and the bonds of fear and subjugation by declaring the God-given dignity of every human being,” said the bishop on Friday, January 24, from his Paris location.

The bishop went on to accentuate the peaceful nature of the protestors, describing how each day the demonstrations begin with prayer, and that at times prayers take place on the hour every hour, with priests mingling among the crowds, hearing confessions. “It is hard to imagine a more prayerful manifestation in 21st century Europe,” he said.

“Events in the last few months and days have been a pilgrimage in our battle for dignity. In the last two months, Ukraine has changed dramatically. The level of social consciousness has increased. The brutality of the special forces is rallying more and more of the population in an active role in this bid for dignity.”

I believe that the dialogue will not be effective without international mediation.”

Bishop Gudziak, formerly rector of the Ukrainian Catholic University in Lviv, reasserted the calls made by religious leaders last December 10th including a request to the Ukrainian government to listen to the protestors’ demands, a denunciation of violence and an appeal for dialogue between the regime and the various groups involved in the demonstrations.

Bishop Gudziak then spoke about the need for dialogue and appealed to the international community to intervene to enable successful dialogue: “Dialogue is very difficult and has a very arduous methodology but there are no better alternatives… I believe that the dialogue will not be effective without international mediation.”

The bishop said: Amid increasing calls for the government to dialogue with opposition groups, Bishop Gudziak said: “We hope that reason and ethical principles will prevail and that authentic dialogue will begin.” He added that the government’s harsh treatment of protestors was undermining its authority, adding: “The legitimacy of the Ukrainian government is predicated by respect for human rights. That respect has been neglected and in some cases has been absent. Protestors have been shot and others have been beaten. The perpetrators of violence have not been brought to justice.”

The bishop said he hoped the country would not turn its back on the peace it has mostly enjoyed since emerging from Soviet domination and that this peaceful record was “miraculous” given the conflict in other countries emerging from USSR control.

Bishop Gudziak also paid tribute to ACN, which he described as crucial in the restoration of UGCC in the post-Soviet era.  “I would like to express a particular word of thanks to ACN which has been the greatest benefactor of our Church. We are very grateful to all the staff in the organisation and its many generous benefactors who will always remain in our prayers.”