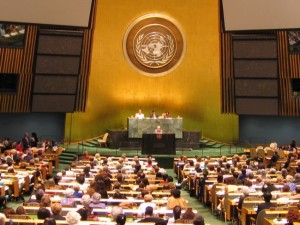 While many Americans took last Monday off for Columbus day, the Third Committee of the General Assembly at the United Nations was meeting in its 66th session to discuss Item 28 (a,b) concerning the Advancement of Women internationally. Arriving at the UN earlier than usual, we were surprised to find the Third Committee present in its entirety. On a good day, one expects to see half of the officers (representing 193 countries) present at one of the plenary sessions–on Monday, not only were the officers present, but many of their attachés were as well.

It soon became clear why countries were giving the session so much attention. Three of the most important women in the UN structure were slated to open the agenda item by engaging in a dialogue with the Third Committee on the issue of the Advancement of Women: the CEDAW Chair, Ms. Silvia Pimentel, The Special Rapporteur on violence against women, Ms. Rasheeda Manjoo, and UN Women Deputy Executive Director, Ms. Lakshimi Puri.

Ms. Puri began the discussions by introducing the work of UN Women and presented the executive summary of the first report published by UN Women on Access to Justice. The report deals with a wide range of matters relating to women’s access to justice worldwide.

In the executive summary of the document it expressly states that 61 countries still restrict women’s access to abortion and also highlights an obscure Colombian Constitutional Court Decision in 2006 that overturned the country’s abortion laws as a flagship decision that should be used a model for future advocacy.

After reading this document it cannot be denied that one of the UN Women’s main goals will be to continue to advocate very strongly for increasing access to abortion internationally. Never before has there been an organization within the UN that has so explicitly championed access to abortion as international right or a matter of justice.

For now, we will leave you with a telling quote from Ms. Puri,

“We have devoted significant efforts to positioning UN-Women as a catalyst for change. We are focusing on building partnerships, cutting edge analysis, strategic presence and high level advocacy and leadership. We chose to focus our first flagship report on the important subject of women’s access to justice because we recognize that effective systems of justice are a foundation for gender equality and women’s full enjoyment of their human rights. Reforms to bring legislation into compliance with the Convention on the Elimination of All Forms of Discrimination against Women are a key step. And so are policy measures to close gaps in the justice chain when women seek to obtain redress.”

One final note, it should be made very clear that there is no internationally recognized right to abortion. That said, the advocacy now being engaged in by UN Women is truly something new and will be the subject of many [articles]to come.

This article courtesy of Turtle Bay and Beyond and is used with permission.