Trending Now
You are at:Home»Featured»United for Religious Freedom
By USCCB on March 15, 2012 Featured, The Shepherd's Voice 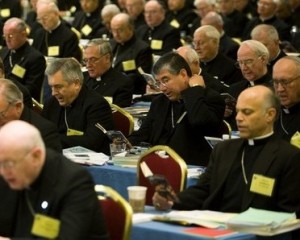 The Administrative Committee of the United States Conference of Catholic Bishops, gathered for its March 2012 meeting, is strongly unified and intensely focused in its opposition to the various threats to religious freedom in our day. In our role as Bishops, we approach this question prayerfully and as pastors—concerned not only with the protection of the Church’s own institutions, but with the care of the souls of the individual faithful, and with the common good.

To address the broader range of religious liberty issues, we look forward to the upcoming publication of “A Statement on Religious Liberty,” a document of the Ad Hoc Committee for Religious Liberty. This document reflects on the history of religious liberty in our great Nation; surveys the current range of threats to this foundational principle; and states clearly the resolve of the Bishops to act strongly, in concert with our fellow citizens, in its defense.

One particular religious freedom issue demands our immediate attention: the now-finalized rule of the U.S. Department of Health and Human Services that would force virtually all private health plans nationwide to provide coverage of sterilization and contraception—including abortifacient drugs—subject to an exemption for “religious employers” that is arbitrarily narrow, and to an unspecified and dubious future “accommodation” for other religious organizations that are denied the exemption.

We begin, first, with thanks to all who have stood firmly with us in our vigorous opposition to this unjust and illegal mandate: to our brother bishops; to our clergy and religious; to our Catholic faithful; to the wonderful array of Catholic groups and institutions that enliven our civil society; to our ecumenical and interfaith allies; to women and men of all religions (or none at all); to legal scholars; and to civic leaders. It is your enthusiastic unity in defense of religious freedom that has made such a dramatic and positive impact in this historic public debate. With your continued help, we will not be divided, and we will continue forward as one.

Second, we wish to clarify what this debate is—and is not—about. This is not about access to contraception, which is ubiquitous and inexpensive, even when it is not provided by the Church’s hand and with the Church’s funds. This is not about the religious freedom of Catholics only, but also of those who recognize that their cherished beliefs may be next on the block. This is not about the Bishops’ somehow “banning contraception,” when the U.S. Supreme Court took that issue off the table two generations ago. Indeed, this is not about the Church wanting to force anybody to do anything; it is instead about the federal government forcing the Church—consisting of its faithful and all but a few of its institutions—to act against Church teachings. This is not a matter of opposition to universal health care, which has been a concern of the Bishops’ Conference since 1919, virtually at its founding. This is not a fight we want or asked for, but one forced upon us by government on its own timing. Finally, this is not a Republican or Democratic, a conservative or liberal issue; it is an American issue.

So what is it about?

An unwarranted government definition of religion. The mandate includes an extremely narrow definition of what HHS deems a “religious employer” deserving exemption—employers who, among other things, must hire and serve primarily those of their own faith. We are deeply concerned about this new definition of who we are as people of faith and what constitutes our ministry. The introduction of this unprecedented defining of faith communities and their ministries has precipitated this struggle for religious freedom. Government has no place defining religion and religious ministry. HHS thus creates and enforces a new distinction—alien both to our Catholic tradition and to federal law—between our houses of worship and our great ministries of service to our neighbors, namely, the poor, the homeless, the sick, the students in our schools and universities, and others in need, of any faith community or none. Cf. Deus Caritas Est, Nos. 20-33. We are commanded both to love and to serve the Lord; laws that protect our freedom to comply with one of these commands but not the other are nothing to celebrate. Indeed, they must be rejected, for they create a “second class” of citizenship within our religious community. And if this definition is allowed to stand, it will spread throughout federal law, weakening its healthy tradition of generous respect for religious freedom and diversity. All—not just some—of our religious institutions share equally in the very same God-given, legally-recognized right not “to be forced to act in a manner contrary to [their]own beliefs.” Dignitatis Humanae, No. 2.

A mandate to act against our teachings. The exemption is not merely a government foray into internal Church governance, where government has no legal competence or authority—disturbing though that may be. This error in theory has grave consequences in principle and practice. Those deemed by HHS not to be “religious employers” will be forced by government to violate their own teachings within their very own institutions. This is not only an injustice in itself, but it also undermines the effective proclamation of those teachings to the faithful and to the world. For decades, the Bishops have led the fight against such government incursions on conscience, particularly in the area of health care. Far from making us waver in this longstanding commitment, the unprecedented magnitude of this latest threat has only strengthened our resolve to maintain that consistent view.

A violation of personal civil rights. The HHS mandate creates still a third class, those with no conscience protection at all: individuals who, in their daily lives, strive constantly to act in accordance with their faith and moral values. They, too, face a government mandate to aid in providing “services” contrary to those values—whether in their sponsoring of, and payment for, insurance as employers; their payment of insurance premiums as employees; or as insurers themselves—without even the semblance of an exemption. This, too, is unprecedented in federal law, which has long been generous in protecting the rights of individuals not to act against their religious beliefs or moral convictions. We have consistently supported these rights, particularly in the area of protecting the dignity of all human life, and we continue to do so.

Most importantly of all, we call upon the Catholic faithful, and all people of faith, throughout our country to join us in prayer and penance for our leaders and for the complete protection of our First Freedom—religious liberty—which is not only protected in the laws and customs of our great nation, but rooted in the teachings of our great Tradition. Prayer is the ultimate source of our strength—for without God, we can do nothing; but with God, all things are possible.